Another Vermont parent has told The Daily Signal that he believes the school district is punishing him for speaking out against a biological male using the girls’ locker room.

John Helfant is one of the volunteer coaches of the Randolph Union High School girls’ varsity soccer team, he said in a Wednesday phone interview. He said he has served as a police officer for 32 years and is the chief of police of the Northfield, Vermont, police department. 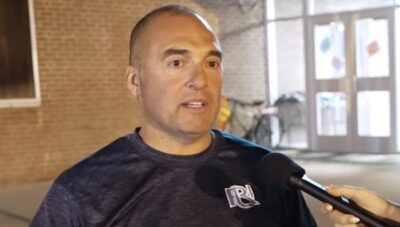 John Helfant speaks with The Daily Signal about his daughter’s experience when a trans-identified male entered her locker room.

Now he believes that because he spoke out against a biologically male student who identifies as transgender using the girls’ locker room, the school district superintendent is using a technicality to prevent him from continuing to coach the varsity girls’ soccer team.

The father of three spoke out in an interview with The Daily Signal team last week outside of a school forum where community members aired their thoughts on a biologically male 14-year-old student using the girls’ locker room while the girls were changing.

“We’ve been fighting for women’s rights as a nation 100 years at least,” Helfant said in the video interview. “I think this is an invasion of women’s rights, it’s just in a different form.”

On Monday afternoon, according to emails reviewed by The Daily Signal, Superintendent Layne Millington emailed Helfant to inform him that the district does not have a record of Helfant “completing the background check procedure, specifically the fingerprinting check.”

“Beginning immediately and continuing until this matter is resolved, you cannot volunteer in any role or for any activity within the OSSD,” the superintendent said, emails show.

Helfant responded to the superintendent: “I will take this as retaliation for my comments against the OSSD and will be informing my attorney.”

“As you know I am a police officer of 32yrs,” he continued. “I obviously have no criminal record or would not have been able to retire from the State Police nor would I still be Chief of Police in Northfield if I did.”

Helfant also told Millington that he submitted the proper paperwork and fingerprints, adding, “If there is a paperwork snafu it is with your people as I provided them with all required paperwork.”

In a phone interview with The Daily Signal, Helfant said that he had fingerprinted himself—which he told Millington officers do “regularly” at his employment—filled out the paperwork, and turned it into the Randolph Union High School front desk.

“My belief is they’re upset about me being outspoken and they wanted to find a way to get me off the field,” Helfant said.

“We receive an actual letter with the results when they have completed their check,” he told Helfant. “It sounds like based on the conversation you had with the secretary, that you were trying to run your fingerprints yourself. There are select locations that do this type of check and who ensure all the paperwork is together at that time so it all gets to the right place. It sounds like you did not follow this process or go to one of those centers – hence the probable hang up.”

The school superintendent, who has claimed that coverage of the girls’ pushback has sparked hatred and bigotry toward both the trans-identifying student and the school district, also accused The Daily Signal of asking “inaccurate” questions and said he would no longer be responding.

In a Wednesday email to the school district community, Millington canceled all Randolph Union High School and district-level open forums, including a Thursday forum, accusing “local members of the community” of reaching “out to groups around the country to try and stir anger against the district.”

“We have again had several threatening phone calls from across the United States,” he said in the email. “While there are no credible threats, out of an abundance of caution we have ramped up security around the district.”

Chris Hurley, another Randolph Union High School father, told The Daily Signal that canceling the meeting has “nothing to do with security.”

“As momentum grows for his removal, he’s trying to control the narrative and cancels his own forum that allows us to speak directly to him and more importantly the community members that he has hoodwinked into believing that the girls’ parents are mere transphobes and hateful bigots for wanting their children safe,” Hurley said. “Again, Layne and his admin have shown contempt for the very community they are hired to serve. People are growing extremely frustrated with his iron fist style of governance.”

School officials have cited state law allowing for students to use locker rooms and bathrooms that align with their stated gender identity. These officials say that they care about everyone’s safety and that Randolph Union High School is investigating whether harassment took place when the girls told their biologically male classmate not to come into their locker room while they were changing.

Parents who spoke with The Daily Signal last week said neither Millington nor the school forum focused on the most pressing matter at hand: their daughters’ discomfort at having a biologically male student in the locker room able to observe them while they are changing.

In a previous interview with The Daily Signal, Helfant cited Vermont’s voyeurism statute, which states that “no person shall intentionally view, photograph, film, or record in any format” the “intimate areas of another person without that person’s knowledge and consent and under circumstances in which the person has a reasonable expectation of privacy.”

“There are no exemptions for schools,” he said, emphasizing that it is “clearly a law violation for a male student to view, watch a female student change her bra or underwear in a women’s locker room or bathroom.”

“My entire life, there’s been this fight for women’s rights and equal pay,” Helfant added. “Guys are literally attacking women’s rights that have been fought so hard for since, you know, the last 100 years, since the suffragettes and to the present time. So it just doesn’t make any sense to me. And I don’t understand why more people aren’t speaking out against it.”

Millington also suspended Travis Allen without pay from his position as the coach of the middle school girls’ soccer team for using male pronouns to refer to the trans-identifying student. That suspension also followed the Daily Signal report highlighting Allen’s daughter’s discomfort at a biological male using her locker room while she was changing.

Allen’s daughter Blake is one of several young ladies who said they were in the Randolph Union High School locker room changing when the trans-identifying student, a biological male, entered the locker room.

Several girls who spoke with The Daily Signal said they asked the student to leave, but that the student did not immediately do so. The girls said the student stood in the corner and looked at them while they were changing, causing them to feel uncomfortable.

Allen offered to avoid using gender pronouns while communicating with trans-identifying students and to take down his social media post. But the school district demanded a public apology from Allen, which he refused, resulting in his suspension.

“When he asked me to publicly apologize, I thought about it,” Allen told The Daily Signal on Tuesday. “I did pause and waited a few seconds. And I’m thinking, ‘If I say that I’ll apologize, I’ll be able to coach my youngest daughter for the rest of the season, but I’m going to, in turn, hurt my other daughter, because I’m not standing up for what we believe in, I’m just cowing to them like so many other people have done. And I just can’t do that.’”