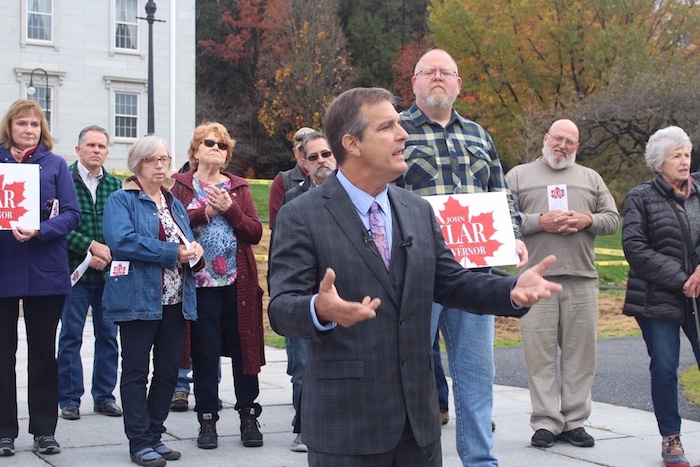 MONTPELIER — The first Republican has entered the 2020 Vermont gubernatorial race, and the newcomer candidate is perhaps best known for his frequent commentaries on conservative websites.

John Klar, an attorney and farmer from Brookfield, made his announcement Monday afternoon on the steps of the Vermont Statehouse.

In addition to being a prolific writer, Klar also has served has the pastor of the First Congregational Church of Westfield, and has worked as a certified counselor for victims of opioid addiction.

His campaign platform, the “Agripublican” plan, focuses on rural Vermonters, the economy, local schools and the opioid crisis.

While acknowledging that he doesn’t have a background in politics, Klar said he has valuable experience to help right the ship in Vermont.

“Clearly I don’t have a political resume, but I have a strong legal one and a strong farming one,” he said.

A theme in his announcement speech was that the government is growing at a faster rate than Vermonters can support. He noted that state employees at the Vermont Agency of Agriculture, Food, and Markets received pay raises of over 15 percent from 2013 to 2017, yet during that same period the state’s median income grew just 3.7 percent.

“What these numbers reveal is that government grows bigger whether or not we Vermonters thrive,” he said. “At some point government becomes too big to bear, and we’re at that point. … Farms close, bureaucracy grows.”

At a number of points, Klar critiqued a Democratic opponent, former Education Secretary Rebecca Holcombe. He said her agenda on education and energy ignores economic realities.

“She proposes to make Vermont affordable by closing schools and imposing a carbon tax,” he said. “How could anyone be more out of touch and disconnected from regular Vermonters?”

He didn’t spend much time discussing Republican Gov. Phil Scott, who hasn’t formally announced a bid for re-election, but the little he said was directed at the governor’s credibility problem with his base.

“Governor Scott has disappointed many of us,” he said. “I voted for him twice and I’m not going to vote for him a third time if he runs — he cannot be trusted to keep his word. And he’s now no more than a lame-duck because he can’t override a veto.”

On the issue of Vermont’s green energy goals, Klar said the state will never be in a position to tackle emissions if it’s not going to maintain a sound economy first.

“You want fear? Fear what is real and imminent,” Klar said. “Math counts folks, inflation kills. We can’t clean up the environment with a deteriorating economy, and we see that around the world.”

When asked by a reporter about global warming, Klar said he acknowledges the challenge of climate change.

“I personally believe in climate change, I do,” he said. “The degree of it, I don’t know. But I also believe that a lot of cleaning up of chemicals would also clean up a lot of the warming.”

Klar said society is burning massive amounts of fuel oil, which has environmental impacts, and he added that current fuels are a finite resource. He also discussed the amounts of topsoil that fast-growing megafarms consume each year. He said some farming practices are damaging to the environment.

Despite being a conservative Republican, Klar said he supports marijuana legalization and thinks the tax rate in a regulated market should be much lower than what’s currently being proposed by policymakers.

“As criminal defense attorney for many years, I saw in the trenches how much more resources of our courts should be allocated to the opioids, the crack cocaine, and now especially the fentanyl crisis,” he said. “Police have told me, ‘So much of my time is spent looking for a roach [leftover marijuana cigarette] in an ashtray.'”

When asked for his views about President Donald Trump, the Republican candidate said his campaign was about Vermont.

“If we’re going to involve ourselves in a national referendum and decide Vermont’s future solely on Donald Trump, then we’re not going to fix any of these problems. … I am focusing on the Agripublicans and what our policy list is and I’m promising I will keep to that,” Klar said.

On immigration, he said he supports a secure border and the U.S. Immigration and Customs Enforcement officials that watch over it. He said illegal immigration hurts those who are trying to enter America through legal means.