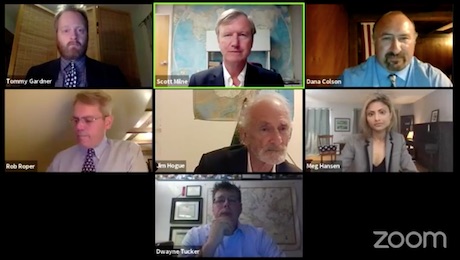 One important topic of discussion was how to deal with immediate economic woes facing Vermont, including potentially a $430 million loss of state revenue.

Milne said Vermonters must first recognize the scale of this downturn.

“The problems that we have coming our way because of the COVID economy are catastrophic. We’re in for the biggest economic storm that we’ve seen in 75 years in America,” he said. “Unfortunately for Vermont, that’s built on a foundation of 20-plus years of economic malaise and mismanagement by an increasingly powerful Democratic/Progressive state Legislature.”

Colson took aim at overzealous government regulations and high costs to do business.

“I do business with hundreds of small businesses and highway departments and individuals all over the state,” he said. ” … Vermonters are struggling, one-party rule has hurt our economy, businesses made of Vermonters are fleeing our state due to high taxes and unrestricted government spending and overregulation. We cannot keep growing government and shrinking the private sector, this is unsustainable.”

Hansen, with her health care background, noted the low death rates for COVID-19 mean parts of the economy can and should open faster to bring economic relief.

“We need to move away from a one-size-fits-all approach,” she said. “We have data now. We’ve seen that there are at-risk populations — these are the elderly and people with chronic conditions. We need to allocate our health care resources to help them make sure that we minimize the transmission. The fatality rate for people under age 70 is 0.04 percent; for those under the age of 18 it is practically zero. … A prolonged, months-long lockdown is just causing economic devastation as well as financial bankruptcy for hospitals.”

Hogue called for the creation of a state public bank to fix the economy.

“As it is right now, Vermont has to borrow a lot of its money from out of state, and then it has to pay it back with huge amounts of interest every year,” he said. “So if Vermont had its own state bank then that money would be recycled back through the state and it would also lower access.”

“I’ve seen a slow decline in Vermont in many different ways. I feel that it’s very important to address every need in Vermont and I have a mile-long list, and every one of those starts with industry and economic growth,” he said. “Seventy-two percent of Vermonters vote that this is their primary concern, we need tax reform.”

The debate covered several other subjects, including the Second Amendment, universal background checks and new restrictions on ammunition capacity.

“We have to get rid of unconstitutional laws,” Hansen said.

Milne, Hogue, and Tucker all agreed that the state has “the right amount” of gun laws currently. Milne expanded his answer.

“We do not want to open up a veto-proof majority Progressive/Democrat-controlled legislature by talking about gun laws. We don’t want to touch gun laws or it’s going to go in a bad place for people that are pro-Second Amendment.”

He added that he thought Hansen’s plan to repeal new gun laws was “naive.” Hansen replied, “It’s not naive if you stand for the Constitution.”

At another point in the debate Hansen took aim at her opponents.

“I’ve seen that winning this statewide race is not necessarily the goal for many of those in power. Their goal is to protect the status quo,” she said. “So I see some of my opponents as gatekeepers of Montpelier, and they are engaged in a war on excellence.”

On other subjects, Colson doubled down on his promise not to seek new taxes.

“First of all let me be clear: no new taxes,” he said. “We need spending cuts, and I would largely leave that to the agency heads to work out the details. A lot of it is shifting our priorities.”

He said that he would limit new hires, and attrition is one way he would allow for cuts. He also proposed cutting regulations on farmers and loosening the restrictions of Vermont’s zoning law Act 250.

“We can do things such as, possibly, assign doctors to a community or home-based health care roles that help people get healthy. We could guarantee universal coverage and health care equitability for all Vermont citizens,” he said.

Also on a health topic, Hogue commented on Vermont’s public vaccination policy, which currently allows for religious exemptions but not philosophical exemptions.

“I would also hope for a better look at vaccines; I think the mandatory policy is shameful and egregious,” Hogue said. “I would like to see the legislature take a more honest look at what they have done with vaccines.”

The full debate can be viewed online here. The debate segment begins at minute 19:40 in the video.