Minimum wage hikes are unlikely to reduce crime rates and instead could increase them, according to a new study produced by the National Bureau of Economic Research (NBER).

The study’s release coincides with the House Education and Labor Committee’s advancement of the Raise the Wage Act of 2019, which would increase the federal minimum wage to $15 an hour over several years.

It also refutes the argument made in 2016 by the former president’s Council of Economic Advisors (CEA) who claimed raising the minimum wage to $12 per hour could prevent nearly 500,000 crimes annually. 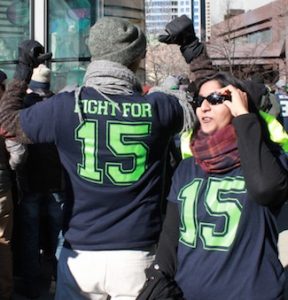 Despite the good intentions of those who favor raising the minimum wage, multiple studies have shown that the the negative impact may far exceed any hoped for benefits.

“While we respect the team of economists working at the CEA at that time, the report’s conclusion unfortunately rested on the assumption that minimum wage increases would only generate wage gains without any substantial offsetting employment or human capital effects,” San Diego State University professor Joseph Sabia explains. “Our study shows that these effects cannot be ignored. The adverse employment effects generated by a $15 minimum wage are likely to increase property crime among some young adults.”

Sabia notes that they found evidence “that some affected younger workers turn to property crime, either due to excessive idleness or to replace their lost income. Higher minimum wages may, therefore, make some neighborhoods less safe.”

“Raising the minimum wage doesn’t just increase joblessness – it increases property crime as well,” Samantha Summers, EPI’s communication director, said. “Pushing a wage hike of this magnitude is guaranteed to bring negative consequences that hurt those who the policy is intended to help.”

The study examined 20 years worth of data from the FBI’s Uniform Crime Reports, the National Incident-Based Reporting System, and the National Longitudinal Survey of Youth 1997. The economists focused on “younger, less experienced teens and young adults who make up a disproportionate share of the minimum wage workforce, and who are more likely to face the brunt of any increase.”

They examined property crimes, violent crimes and drug crimes, and used a regression method and other econometric strategies to determine the effect of the minimum wage. They sought to “be sure we were not confusing correlation with causation,” Sabia says.

Their analysis found that property crimes were more likely to be larceny than burglary, motor vehicle theft or arson. Increased crime rates were identified in counties with populations over 100,000.

By comparing the crime responsiveness to minimum wage increases, the authors found that a 10 percent increase in the minimum wage between 1998 and 2016 led to nearly 80,000 additional property crimes committed by 16-to-24 year olds. Using the same metrics, they calculated that if the $15 per hour minimum wage was implemented, another 410,000 property crimes would be committed as a result.

The report, Ryan Bourne at the Cato Institute, argues, “presents robust evidence that minimum wage hikes do not reduce crime. In fact, they increase property crime arrests among 16-24 year olds – the group for whom the minimum wage is most likely to bite.”

The study was supported in part by the Employment Policies Institute (EPI), which also published a book and policy brief to explain the socio-economic consequences of a $15 minimum wage mandate. EPI estimates the mandate could result in the loss of two million jobs.

Among those surveyed, 64 percent said a better alternative to increasing the minimum wage would be to expand the Earned Income Tax Credit (EITC). The EITC has proven to increase income and reduce poverty for many without the unintended negative consequences a higher minimum wage presents, they argue.

Sabia adds, “expansions in the generosity and eligibility for the EITC would be far a more effective anti-poverty policy than raising the minimum wage.”