Rep. Peter Welch is among 67 House Democratic lawmakers who have signed on in support of the Green New Deal, a grab-bag of utopian green goals put forth by New York freshman Rep. Alexandria Ocasio-Cortez and Sen. Ed Markey of Massachusetts.

The Democrat-backed deal proposes a full makeover of U.S. infrastructure and energy in an effort to address global warming. Critics, however, are calling it a massive government intervention complete with centralized control of the private sector and the lives of individual Americans. 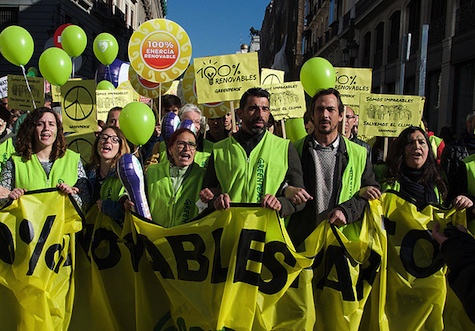 GREEN AGENDA IS COMING: The Green New Deal looks to overhaul the U.S. economy, energy and infrastructure at any cost.

Key points from the resolution’s text include “meeting 100 percent of the power demand in the United States through clean, renewable, and zero-emission energy sources.”

One bullet point listed in the disputed FAQ said the deal would provide “economic security to all who are unable or unwilling to work.”

The document also includes a general statement on how to pay for the green initiatives.

“Even if every billionaire and company came together and were willing to pour all their resources into this investment, the aggregate value of investments would not be sufficient. That’s why we must utilize World War II era and New Deal-style financing which commits to long-term benefits instead of short-term quarterly returns,” the original document states.

Despite backlash from critics who say the Green New Deal is extreme in its attempt to control everything from air travel to cow flatulence, Vermont’s lone Democratic representative on Tuesday doubled down on the plan, saying it’s necessary to avert weather disaster.

“It is indisputable that climate change is a grave threat to our environment, public health and the economy. Its effects are already being felt by Vermont’s sugar makers, ski areas, and farmers,” Welch told True North.

“Across the country and around the world, historic weather patterns are being disrupted, triggering extreme weather. Taking bold action now will not only be good for the planet, but doing so will also create good new jobs and economic opportunity for renewable energy and energy efficiency businesses,” he added.

Welch called the Green New Deal “a broad outline” of ambitious goals, and said Congress over the next two years would be drafting legislation and conducting hearings to make progress toward those goals.

“Time is of the essence,” he said.

Deborah Billado, chair of the Vermont GOP, said she believes Welch is out of touch with Vermonters and most Americans.

“He’s clearly not reading what the rest of America is reading, and he’s not interpreting it in the way that the majority of Americans are interpreting the proposal,” she said. “It’s pretty out there. I’m a little bit surprised that any of our delegation from Vermont, except for perhaps Bernie Sanders, would have signed onto that.”

She noted that even green energy backers such as billionaire Bill Gates have backed off from support of the plan.

“Clear-thinking people are not really paying attention to this because you can’t take this seriously,” Billado said. “And those that are taking it seriously, I think we need to take a real look at those people. Are they really in leadership roles?”

On the national scene, there’s been more backlash to the deal in media and social media. Writing for World Net Daily, political commentator Patrick Buchanan commented on the implications of overhauling the transportation sector.

“Gas-powered cars are out. How long will that train trip from D.C. to L.A. take?” he wrote. “And if China continues its relentless rise in carbon emissions until 2030, as permitted by the Paris climate accord, while the U.S. spends itself into bankruptcy going green, where would that leave America and China at mid-century?”

Nonetheless, Ocasio-Cortez this week said she is serious about the goals of her plan.

“Don’t mess with our future,” she wrote on Twitter. “When it comes to climate, it’s all our lives at stake. The younger you are, the more consequences you’ll see. It’s life and death for us. And we will fight like it.”

The green movement appears to be counting on a mobilized youth movement to push the Green New Deal forward.

“We’re building an army of young people to make climate change an urgent priority across America, end the corrupting influence of fossil fuel executives on our politics, and elect leaders who stand up for the health and wellbeing of all people,” states the green website sunrisemovement.org.