In particular, the state lawmaker representing the Addison-5 district, brought up the impacts of inflation and the continued failure to address pension liabilities. 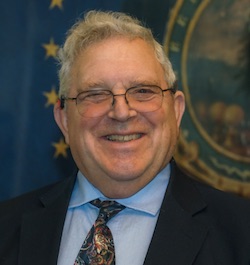 “Boy there’s a lot of pressure on, especially the dairy industry right now, as far as profitability,” Smith said. “Of course, you can’t stay in business without making a profit. So for commodity prices, milk prices have stayed about the same for the past five years. Inflation has certainly increased the cost of doing business, and this year it’s going to be substantially more.”

He said that while dairy prices at the store shelves are likely to remain stable, it’s the costs on the production side that are putting pressure on dairy farmers.

“I’m already seeing increases in almost all of our commodity inputs, and you’ve seen it if you tried to buy a piece of lumber,” he said. “That’s happening in the agricultural sector as well.”

He noted that the organic milk industry is about to mostly die out in the Northeast Kingdom area of the state.

“All the organic dairy producers in the northeast have actually been told that they have one year to exit the business because we’re going to drop your contract on picking up your milk,” Smith said. “And so this is huge because a lot of people went into the organic market because it was a niche market and they paid a little more for it than they did conventional milk. … Now all those folks are struggling to find out what their future is going to be.”

He added that the northeastern portion of the nation is generally at a disadvantage when it comes to competing with dairy operations from warmer climates.

“I’ve got to tell you that the Northeast, I don’t care if it’s eastern New York all the way up to the state of Maine, that’s an area with a high cost of doing business,” he said.

Smith said that while the popular conception among the public is that large farms approach the small ones to buy them out, Smith said it’s often the other way around.

“It’s kind of a mutual arrangement that while ‘I need to be getting out of the business because I’m not being quite as profitable as I’d like, I don’t have any young person coming up behind me, so it’s time to retire and we need to make a change,’ so they oftentimes go and contact the large farms and say, ‘will you buy my property?'”

Smith said that if the various milk price subsidies currently active in Vermont were to suddenly go away, producers will leave the state for friendlier climates.

On Vermont’s ever-growing pension crisis calculated as $5.6 billion in unfunded liabilities, it is a subject Smith said should come up again this legislative session. But he is skeptical it will get resolved.

“The pensions should be [a priority] but I don’t hear anyone talking about it,” he said. “I mean it’s kind of something that they keep pushing back. You know all the years and you [Wright] were there we heard about how if we didn’t take some action on pensions then we were going to have a real problem.”

While some of the influxes of federal dollars over the years is going to alleviate the pension crisis, Smith thinks there should have been more.

“Right now we’ve had more money coming into the state than any time in my lifetime, and I don’t know if any of that is heading towards the pensions and we should be finding ways to live up to our obligations and fund them,” he said.

Listen to he full show here.

Images courtesy of USDA and state of Vermont