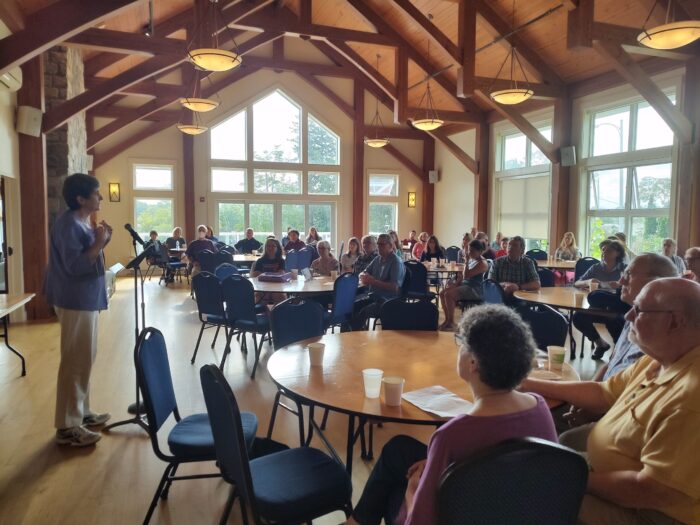 INFORMING THE PUBLIC: Rep. Anne Donahue, R-Northfield, told an audience at the Holy Family Parish Center in Essex Junction on Saturday that Vermonters — including those who identify as pro-choice — are not getting the truth about the implications of Article 22.

“The message needs to be to pro-choice Vermonters: this is not what you believe in, or its highly unlikely. There’s a tiny percentage that believe in late-term abortion and the abortion of viable babies without any restrictions,” she said.

Donahue emphasized repeatedly that this is where pro-life and pro-choice Vermonters align.

“There is only one message that actually impacts voters in terms of changing their minds, and that is the question of unlimited elective third-trimester abortions,” she said. “Focus in on that because that’s the issue that’s going to make a difference.”

The supportive crowd of about 50 audience members included at least one woman who identified as pro-choice. She didn’t give her name, but she said she got upset when other pro-choice advocates called for taking parents out of the decision-making process on abortions.

The wording of the constitutional amendment is vague, including its entire text makes no mention of the word abortion.

Donahue read the text that voters will see on their ballots this fall: “That an individual’s right to personal reproductive autonomy is central to the liberty and dignity to determining one’s own life course and shall not be denied or infringed unless justified by a compelling state interest and achieved by the least restrictive means.”

Donahue said the language is confusing and difficult for the public to understand.

“If you are not a lawyer you do not have a clue what that actually means,” Donahue said.

Mary Beerworth, the executive director of Vermont Right to Life, was among those in attendance. She claimed the proposal was intended to be vague and open for interpretation.

“Senator Ann Cummings from Montpelier said that she wanted to keep it vague because she wanted to be prepared for technologies coming in the future,” Beerworth said. “… It is deliberately vague so that it can go as wide and far as possible.”

Donahue emphasized once again that Article 22 would surpass the rest of the nation and most of the rest of the world in terms of allowing unrestricted access to abortion regardless of viability.

“Almost every nation, including all European countries, limit abortion after 12 weeks and place major restrictions after 24 weeks,” she said. “Even California often seen as one of our most liberal states, they ban selective abortion after viability.”

Donahue also stressed that Article 22 goes well beyond what was allowed under Roe v. Wade, the  former federal law on abortion that was struck down this year by the U.S. Supreme Court.

“Roe itself flatly rejected the argument that — and a I quote — a women’s right is absolute and that she is entitled to terminate her pregnancy at whatever time and whatever way and for whatever reason that she alone chooses. Roe v. Wade rejected that,” Donahue said.

She also said if Vermont becomes an outlier in its excessive abortion access, that there could be visitors from out of state to do late term abortions here in Vermont.

“It [late term abortion] will be available in Vermont. And so this idea that they are very rare in Vermont or that hospitals don’t do them in Vermont unless the baby is going to die during birth, that’s simply based on miss statements of the facts.”

One thought on “Rep. Anne Donahue says most pro-choice Vermonters do not support what’s in Article 22”