By Michael Carroll | The Center Square

The Congressional Budget Office threw some cold water on efforts by congressional Democrats to raise the minimum wage to $15 per hour with a prediction that such an increase would eliminate as many as 3.7 million jobs by 2025.

The July CBO report came out in advance of a congressional vote on the Raise the Wage Act. An increase of the federal minimum wage from the current $7.25 to $15 per hour would lead to a loss of 1.3 million jobs in the CBO’s median estimate, but the losses could ultimately reach 3.7 million jobs, the report states.

Supporters of a national $15 minimum wage say it would boost wages for millions of Americans who live below the poverty line. The CBO backs that position up, saying in addition to the job losses it would boost wages of 17 million workers who would otherwise earn less than $15 per hour. 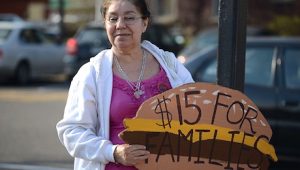 Supporters of a national $15 minimum wage say it would boost wages for millions of Americans who live below the poverty line.

The Washington-based Employment Policies Institute reported that the federal study dovetails with EPI research earlier this year. Nearly 2 million jobs would likely be lost if the nation’s base wage were raised to $15 per hour, the EPI study found.

“If House Democrats were uneasy about voting on $15 before this week, the CBO report should have them terrified,” EPI spokeswoman Samantha Summers said in a prepared statement. “The CBO provides further evidence of what countless studies have also shown: Raising the federal minimum wage will only hurt those it intends to help, wiping out thousands of starter job opportunities and shuttering the businesses that provide them.”

The effects of a lower minimum wage hike would be much more muted, according to the CBO. Raising the wage to $12 per hour would result in job losses of 800,000, while an increase in pay to $10 per hour would lead to losses of 100,000 nationwide, the report states.

“Generally, we are not supportive in any increase in the minimum wage,” Summers told The Center Square. “… It’s bad policy.”

Lawmakers have better alternatives to helping out low-wage workers than raising the minimum wage, she said.

“We implore Congress to look at the earned income tax credit,” Summers said. “That is a better way to lift the income of those who are in poverty.”

Currently, most minimum wage earners are part of households that make three times the poverty threshold, she said. Using a tax credit would help to put more money in the hands of low-income workers, according to Summers.

EPI has also found that negative effects result from U.S. cities raising their minimum wage. Summers pointed to a recent University of Washington study that concluded Seattle’s minimum wage hike to $15 per hour led to low-wage workers losing an average of $80 a month in lost hours.

And New York City’s increased minimum wage law led to the loss of 6,000 restaurant jobs in 2018, according to EPI.

3 thoughts on “Raising minimum wage to $15 would cost up to 3.7 million jobs, CBO study finds”