As Americans are trapped in their homes, unable to work, and struggling to pay bills due to the threat of a global pandemic, the left has a reminder for us.

The real threat is climate change.

“We’ve seen all too terribly the consequences of those who denied warnings of a pandemic. We can’t afford any more consequences of climate denial. All of us, especially young people, have to demand better of our government at every level and vote this fall.”

That was the message in a March 31 tweet by former President Barack Obama in response to the Trump administration’s rolling back Obama’s fuel economy standards in March. 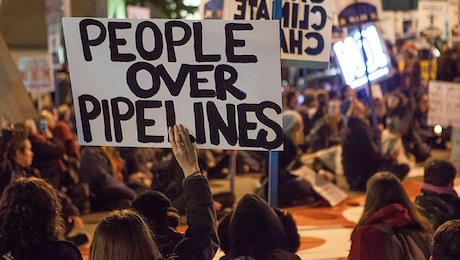 Americans want to get back to work, and they will. Radical environmentalism provides no path to prosperity, only degrowth and stagnation.

While the country and really the whole world is enmeshed in stopping the COVID-19 pandemic, Obama and many others on the left are desperately trying to get Americans to embrace their agenda.

Incredibly, and certainly revealingly, some on the left even tout our current crisis as some kind of model for how we can address climate change.

Numerous media outlets have published pieces like this touting how the COVID-19 pandemic has led to a decrease in carbon emissions.

“The sweeping halt of economic activity around the world has governments scrambling to provide adequate relief for vulnerable industries and people,” a report in The Hill notes. “But one silver lining is emerging from this economic freeze: carbon emissions are down. And scientists estimate that they could fall even farther, specifically to pre-World War II levels.”

Vox writer David Roberts said on Twitter in late March that COVID-19 actually has saved countless lives in China because air pollution wasn’t as bad as it normally would have been.

The shutdown of economic activity in China in response to the virus prevented enough air pollution to save, conservatively, 20X more lives than the virus took. (That's as of March 8; not sure what an updated calculation would show.) https://t.co/1JcidoRTNq

This is not only a disturbing contention but also underestimates what are almost certainly vastly higher death tolls from COVID-19 than the Chinese communist government admits.

Some environmental activists are clearly excited at the possibilities of “degrowth,” as one environmental economist called the widespread economic contractions that have become possible in the wake of the coronavirus outbreak.

Ed Conway, the economics editor of Sky News, had a particularly disturbing take.

“Don’t take this the wrong way but if you were a young, hardline environmentalist looking for the ultimate weapon against climate change, you could hardly design anything better than [the] coronavirus,” Conway wrote. “Unlike most other such diseases, it kills mostly the old who, let’s face it, are more likely to be climate sceptics. It spares the young. Most of all, it stymies the forces that have been generating greenhouse gases for decades.”

Wow. Could this make environmentalists seem any more like comic book villains?

The current economic curtailments are just a taste of what extreme environmentalists actually want for the economy and our way of life. Their goals necessitate these kinds of shutdowns; they want degrowth as our world transitions to its green future.

And some don’t want to let this crisis go to waste, demanding that we pass some variant of the Green New Deal and turn the entire economy over to top-down government planning. If it seems remarkably like socialism, that’s because it is.

But despite the unhealthy excitement among some environmentalists, this moment hardly portends America’s sudden embrace of their radical suggestions.

Just look at how fast the plastic bag bans have been collapsing in the wake of the pandemic.

These bans were already of little utility besides virtue signaling, but when combined with the health hazard of using reusable bags, they have been done away with around the country.

Whatever isn’t mandatory must be banned, it seems.

But this pandemic likely will have a far greater impact on the minds and actions of Americans than rethinking bag bans.

The current crisis in the U.S. economy is, in miniature but concentrated form, precisely what the Left has in mind in response to climate change: shutting down large sectors of the domestic and global economies through official writ, social pressure, and indirect means, in response to a crisis with potentially devastating and wide-ranging consequences for human life and human flourishing.

Our current difficulties only reveal just how much Americans and people across the globe will have to upend their lives to counter climate change the way activists say is necessary to save the planet.

Temporary shutdowns may be necessary to flatten the curve of the coronavirus outbreak, but they are both deeply costly and unsustainable in the long run.

Even with the almost total lockdown of our national and world economy, where millions find themselves unemployed and countless businesses have shut down, it’s still not enough for climate activists who have unreasonable goals and demands.

And as countries emerge from this morass, they are unlikely to eagerly embrace policies that make renewal almost impossible.

The reality is, countries enduring extreme economic hardship are less likely to be mindful of the environment. It’s natural that desperate people who struggle to put food on the table aren’t going to welcome deep economic restrictions that prevent them from improving their own well-being.

In fact, freer, more prosperous societies are more likely to willingly make efforts to clean up the environment.

It’s illuminating to see so many on the environmentalist left looking at the results of economic paralysis as a silver lining in this catastrophe.

Americans want to get back to work, and they will. Radical environmentalism provides no path to prosperity, only degrowth and stagnation.