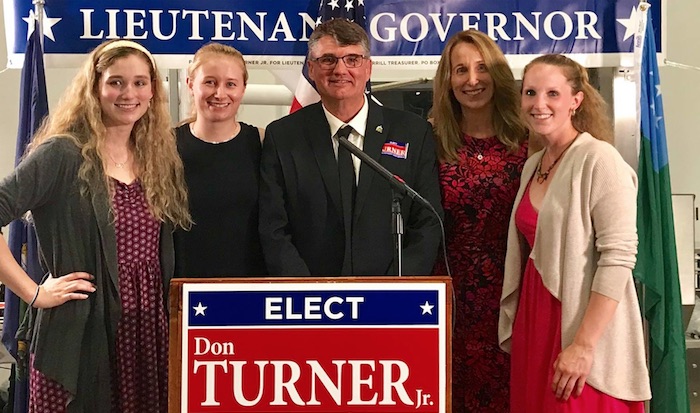 For Don Turner, wife Gail Turner, and their three daughters, running for statewide office in Vermont is a family affair.

RUTLAND — The Turners haven’t always agreed on political matters, but as House Minority Leader Don Turner stumps across the state with his wife by his side, the couple say they are about doing what’s best for Vermonters, not any particular party.

Turner began his statewide campaign for lieutenant governor in earnest this month, and it has included multiple visits to Rutland County, the state’s Republican stronghold.

The 53-year-old Republican from Milton attended a meet-and-greet gathering last Friday at the Stonehenge Indoor Golf Center in Rutland, as part of a fundraising opportunity for GOP candidates.

An hour prior to the event, Turner stood on the southwest corner of Main Street (Route 7) and West Street in Rutland City holding a campaign sign and waving to passing vehicles. As Rutland Town Selectboard Chair Joshua Terenzini said to the audience to kick-start the evening, Turner is no stranger around town, even though he lives two hours north.

For Turner, a fourth-generation Vermonter, and the outgoing minority leader of the Vermont House, the audience was as friendly as it was enthusiastic in welcoming him.

“Rutland County is a very friendly place,” Turner said at the gathering.

“It’s a lot of work and takes a team to win — my team in Rutland is great, with the help of Joshua and (County GOP Chair) Terry Burke.”

He acknowledged the difficulty in running against an incumbent and said his campaign team has started polling Vermont voters to gauge where he stands. He also urged each attendee to encourage 10 like-minded people to vote as the election draws near.

According to Turner, the most effective thing a lieutenant governor can do in Montpelier is bring Vermonters of multiple stripes together as a coalition.

No one believes Turner is the man to do that more than his wife, Gail Turner, who is the campaign’s scheduler and key moral support. 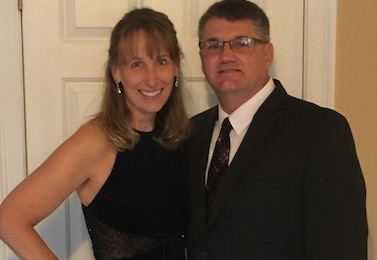 “In every job he’s ever had, he listens,” she told True North. “People call him all the time with problems and issues; somehow he’s able to bridge the differences and work with, not against, people. He really helps them.”

She said that while the couple’s three children are grown an in their 20s, they stay engaged with their father’s political activities and support his candidacy. She also admits that the couple is practiced at the art of nonpartisanship.

“There were plenty of years when our votes cancelled each other out,” she said, “but there’s more to a good marriage than just politics. I have never told Don that he couldn’t do something. I support him. I never hold him back. He’s very driven and I am content to just do what I do. I certainly don’t have the drive he has.”

When it was his turn to speak, Turner, a 35-year member of the Milton Volunteer Fire Department, talked about the need for community involvement.

“We have a crisis in volunteerism in this state,” he said. “We need more young people involved in our volunteer fire and rescue squads and in other areas, too.

“One of the things I can show Vermonters is just how important it is to be a community volunteer. When someone calls 911, there’s a genuine feeling of being able to help that just can’t be measured. But you can see it a person’s eyes when you’re there to help.”

He added that his background, as both a state legislator and Milton’s volunteer fire chief, gives him an understanding of bridging gaps and listening to a diverse population on the issues.

“I believe I am good at bringing people together,” he told TNR. “I’ve been in the minority in the Vermont Statehouse, and at the end of the day you have to come together for the good of the state. I believe it’s what’s best for Vermonters, not what’s best for a particular political party.”

He said the things he’d like to accomplish if elected include boosting local volunteerism in fire and rescue services, ending high taxes and fees and addressing the systemic causes of why young people are leaving Vermont.

“We need to bring our education system with employers and have the state be the conduit,” Turner said. “We have 30,000 college students here in Vermont. Why do most of them leave?”

Getting more Vermonters educated in trades is also important to the future of the state, Turner continued. “We need to get more of our young people in the trades. There’s nothing wrong with being in the trades. It’s a good life with excellent pay, but there’s hard work involved.”

And as he has learned from his own marriage and family relationships, Turner says everyone is welcome to be heard and to participate.

“If you’re not being heard, I want you to be able to come see me, if elected as lieutenant governor,” he said. “In this campaign I am stressing collaboration, maintaining an open door (if elected) and welcoming everyone, all Vermonters, to participate.”