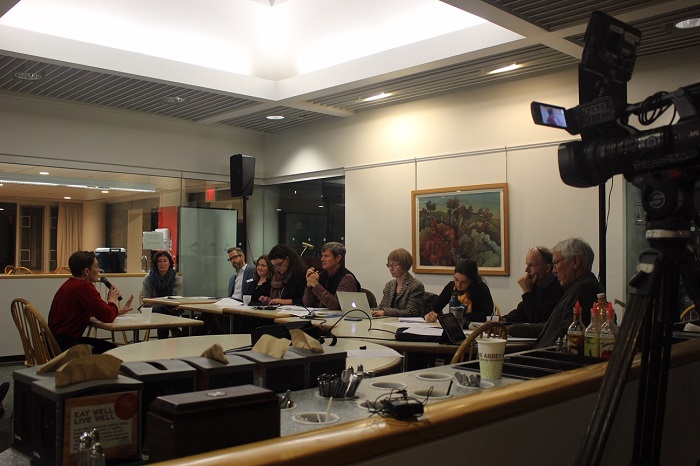 WHAT CAN GOVERNMENT DO BETTER?: At a public meeting Wednesday at the Vermont Statehouse, members of the public told lawmakers what government might do better in the next legislative session to foster a strong rural economy.

MONTPELIER — Lawmakers from the Rural Economic Development Working Group (REDWnG) heard dozens of Vermonters share their thoughts on how to grow a rural economy during a public meeting at the Statehouse last Wednesday, and opinions differed widely on the role government should play.

REDWnG consists of between 15 and 20 members in the Vermont House of Representatives who work to advance policy initiatives aimed at strengthening the economy in rural Vermont communities.

As they opened up the session to take public comments, some Vermonters demanded more action on global warming. Jordan Giaconia, public policy manager of Vermont Businesses for Social Responsibility (VBSR), was one such voice.

“Many of our rural businesses that VBSR represents are interested in climate action,” he said.

Giaconia continued that not only do his clients see fighting global warming as a “moral imperative,” but also as an economic opportunity. He said his members suggest actions ranging from divesting money from fossil fuel companies to building electric vehicle infrastructure. Such actions, Giaconia said, would “yield significant economic benefits for rural and low-income Vermonters as well as ratepayers at large.”

Jenna Koloski, the community and policy manager with the Vermont Council on Rural Development, shared a similar sentiment.

“On the state policy side, we facilitate the Climate Economy Action Team,” she said. “It’s a group of large and small businesses and organizations unified around the belief that Vermont can be a leader in developing rural solutions to climate change.”

Koloski continued that she thought a priority for 2020 should include signing onto the Transportation and Climate Initiative (TCI), a regional carbon pricing scheme that will raise the cost of fuels for the fuel dealers, and ultimately vehicle drivers, in the name of trying to reduce fuel consumption and carbon emissions.

“Greta stands forward as Time’s Person of the Year, striking out with strong values, wellness, social fairness, and responsibility,” she said.

Olmand says she wants to Vermont to lead in environment-first development policies.

Not everyone who spoke put global warming as a top concern. Some said they worried more about developing their businesses or running municipal services without regulatory hurdles.

Greg Tatro, of G.W. Tatro Construction Co. in Jeffersonville, offered up his concerns. As a member of the Johnson Planning Commission, he said he’s concerned with the burdensome constraints of Vermont’s Act 250 development process.

“Act 250 is expensive and it’s unpredictable,” he said. “I built a bank in Jericho this year, and between Act 250, civil engineering and the stormwater system, it was over $200,000 just to get started.”

Tatro continued that an associate of his also built banks, one in Vermont and another in New Hampshire, and that it took just one-third of the time and money to build in New Hampshire. He said that has to change.

“If you are a business wanting to move here and you don’t even know if you can get a permit, this is something you need to work on,” he said.

Liz Royer, a resident of Williston and the executive director of the Vermont Rural Water Association, expressed concern about the high cost of cleaning up PFAS (perfluorooctanoic acid).

She said the cost of getting it out of a water system could approach “several million dollars.”

“We all want to protect public health, but there are unintended consequences of these new requirements,” she said. “There are ongoing financial impacts of Act 21. … Our rural communities need funding mechanisms to help drinking water systems to continue monitoring PFAS and other chemicals that may emerge as contaminants of concern.”

“They are often seasonal, and one of the real challenges to keep people in place, to work between different seasonal jobs and to work between having jobs, is the lack of health care,” he said. “I would hope you put into your rubric universal health care because, along with child care, I think that’s a huge impediment to having folks be able to stay and live in our rural areas.”

State Rep. Chip Conquest, D-Wells River, was the main moderator. After the hearing, he told True North that comments about the need to change Act 250 stood out to him.

“One of the things that I found interesting was hearing the number of people who brought up the proposals for changing Act 250 and how that might affect rural economies,” he said. “What I heard from a couple of people was their sort-of support for the work of Act 250 as it has existed, but a need to make it more usable for people who have to go through that process, to make it quicker and less expensive.”