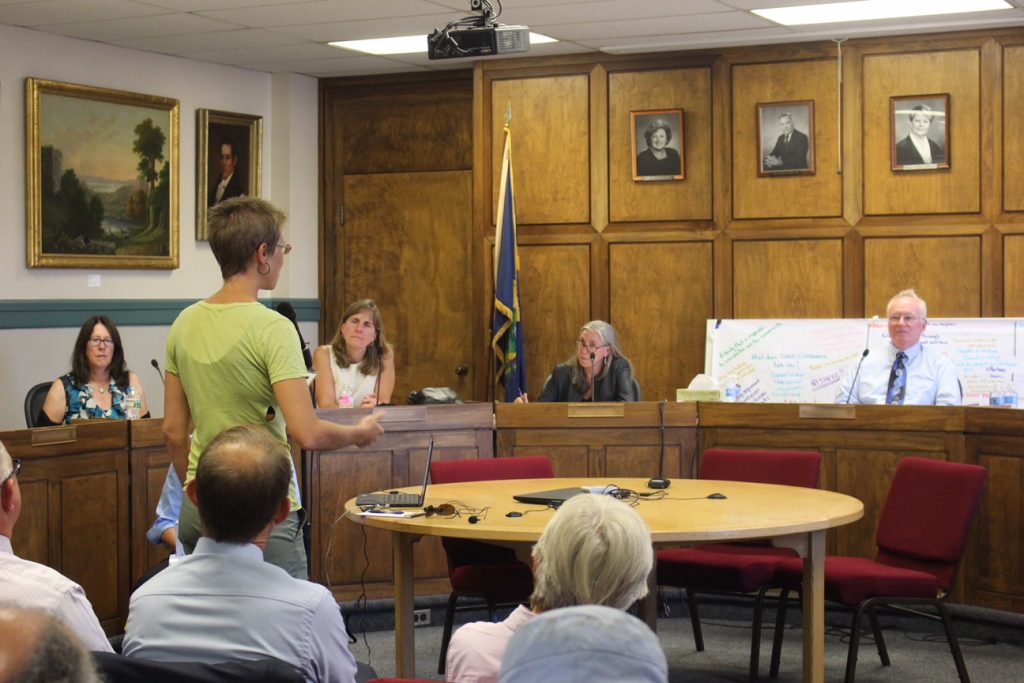 PREMIUMS TOO HIGH: Vermonters let the Green Mountain Care Board have it when it came time to vent their frustrations over continued premium rate hikes for health insurance.

MONTPELIER — The Green Mountain Care Board took heat from protesters and members of the public last week, as health care consumers reacted negatively to potential rate increases from Blue Cross and Blue Shield of Vermont and MVP.

At a public hearing held last Tuesday at City Hall, about a dozen members the public took to the microphone to share their personal stories on how health care premiums are already burdensome, even without the new hikes being proposed by the state’s two private insurers.

MVP and Blue Cross have proposed average increases of 10.9 percent and 9.6 percent, respectively. However, due to changes by the Legislature this year, Vermonters can actually expect to see a 6.9 percent increase from Blue Cross and 6.4 percent for MVP.

For both insurers, the decision by the board is still in flux.

During the comments period, Nancy Detra, of Gilford, talked about how she relies on medication, and said proposed rate increases would prohibit her from getting the treatment she needs.

“I can almost guarantee I will reach a personal health crisis, it’s just a question of when,” she said. “This is not health care — it’s a lottery and a very expensive one.”

Like many of the people who spoke out, her proposed solution is to enact a universal health care system.

“I urge the Green Mountain Care Board to deny rate increases and move to a universal care system as outlined in Act 48,” Detra said.

John King, another attendee of the event, said the cost of health care is especially hard on the unemployed.

“I have a family member who is very unemployed and low-income, and it’s a constant struggle to find money for this person’s health care,” he said. “And all the time I see people on the margins who are struggling to have the basic right of care, and it doesn’t feel right.”

Sean Stephens, of Montpelier, spoke about how his fear of high deductibles once caused him to forego a call to 911 during a personal emergency involving a bow and arrow.

“I fell on the floor bleeding from the eye-socket and worried that I cracked my skull, and my son asked me, ‘Should I call 911?’ And as I was writhing around in a pool of my own blood, I had to tell him, ‘No, don’t call 911. We can’t afford it.’”

Curt Ericksen, also a Montpelier resident, gave a different perspective. As general manager of the Vermont Compost Company, he said health care is a burden on his budget.

“As a company we don’t have the margin where I can afford to pay a proper health care plan,” he said. “So we take the fine by the state each year, and what I say to my staff is, anyone who wants to go out on the market and get health care, we’ll reimburse 50 percent of what that cost is.

“I can say of the 18 full-time staff … when they see what the cost of what their health insurance is compared to the costs which they are going to be stuck with coming in and out of a hospital, it’s just a poor investment.”

Ericksen went on to urge that the board reject the rate proposed rate increases.

Ellen Schwartz, of Brattleboro said she thinks the relationship between the board and the insurance companies is preventing board members from making decisions in the interest of insurance customers.

“So how independent of the board are the insurance companies? It looks to me like they get to call the shots on who counts and who doesn’t,” she said. “The only voice that the people of Vermont have is the testimonies that you receive from people like us here tonight, which if I remember from last year’s hearing, we were told they don’t actually count since none of us have party status.”

Multiple speakers mentioned that Mike Fisher, Vermont’s chief health care advocate, was blocked from testifying before the board at hearings. Fisher who attended Tuesday’s hearing, disputed the claim and reassured attendees that his views were heard by the board.

Board members told True North after the event that the hearing was for informational purposes related to premium rates, and that the board did not intend to issue a response to particular comments made by the public.

The Green Mountain Care Board is expected to make a decision about Vermont Health Connect insurance rates in August.