Use of Vermont state lands may be returned to the Abenaki for cultural and religious practices under a proposed bill.

Though they already have access to public lands just as anyone does, the Abenaki’s activities on that land are still regulated by the state. Since they were stewards of the land long before Europeans colonized the area, the tribe wants the right to use it as they did then — free of restrictions imposed by the state government. 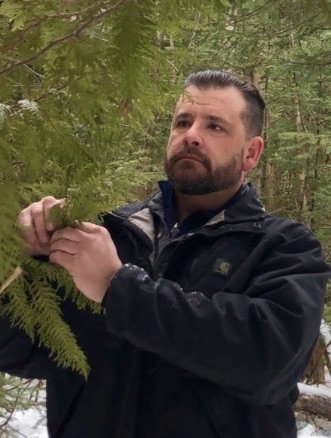 Jon Bosley, a member of the tribal council for the Nulhegan Band of the Coosuk-Abenaki, harvests northern white cedar for use in traditional medicines in early March.

In order to solidify Abenaki-specific land use rights and officially acknowledge their relationship with the land, legislation must be enacted, said Jon Bosley, a member of the band and tribal council for the Nulhegan Band of the Coosuk-Abenaki. They are one of four Vermont-recognized bands.

“We do have agreements with the state already so that we can harvest and do different things on state land, but this type of legislation secures that,” said Bosley. “Our philosophy is not really one of land ownership. Rather, we’re stewards of the land because the land was here before us and it will be here after.”

Having access to the state’s public lands for hunting, medicinal, agricultural, and cultural practices is important to the Abenaki. The Nulhegan Band uses about 60 acres in Barton.

Despite the uncertain chances of the bill, H.618, getting passed, any discussion about it is positive, Bosley said.

“Ongoing conversations and legislation are always good, and necessary. Hopefully, enough people will hear about this bill for it to get somewhere,” Bosley said.

Don Stevens, Chief of the Nulhegan Band, has often called for access to state lands and for the tribes to be considered at the forefront of state affairs. Recently, more legislation has been set in motion due to increased cultural awareness — both at the local and global scales.

Referring to another bill, H.556, which would exempt Abenaki from land taxes, Bosley said, “As a small group of people without an official revenue source, having to pay taxes on land that’s been returned to us jeopardizes our ability to maintain stewardship. So, looking at it from a moral perspective, that bill is really important.”

John O’Brien, a Democrat representing Windsor and Orange Counties, is the lead sponsor of the land use bill. Since so much work goes into getting legislation passed, this is only the second bill that he’s headed up. However, he feels that this topic must be considered more in Vermont’s legislative bodies.

“The tribes would ultimately love to have sovereignty over the land, but for now, at least having access to land for agriculture and other tribal needs is a step forward,” O’Brien said.

Due to the amount of covid-related legislation in circulation, many other bills are often pushed to the background and forgotten about, O’Brien said. It’s been hard to get any non-pandemic related legislation passed, so the future of bill H.618 is uncertain unless it reaches a broader audience.

“I wanted this bill to see the light of day and get some conversation going. So much of the legislature that gets accomplished is done incrementally; without that conversation, it’s never going to happen,” O’Brien said.