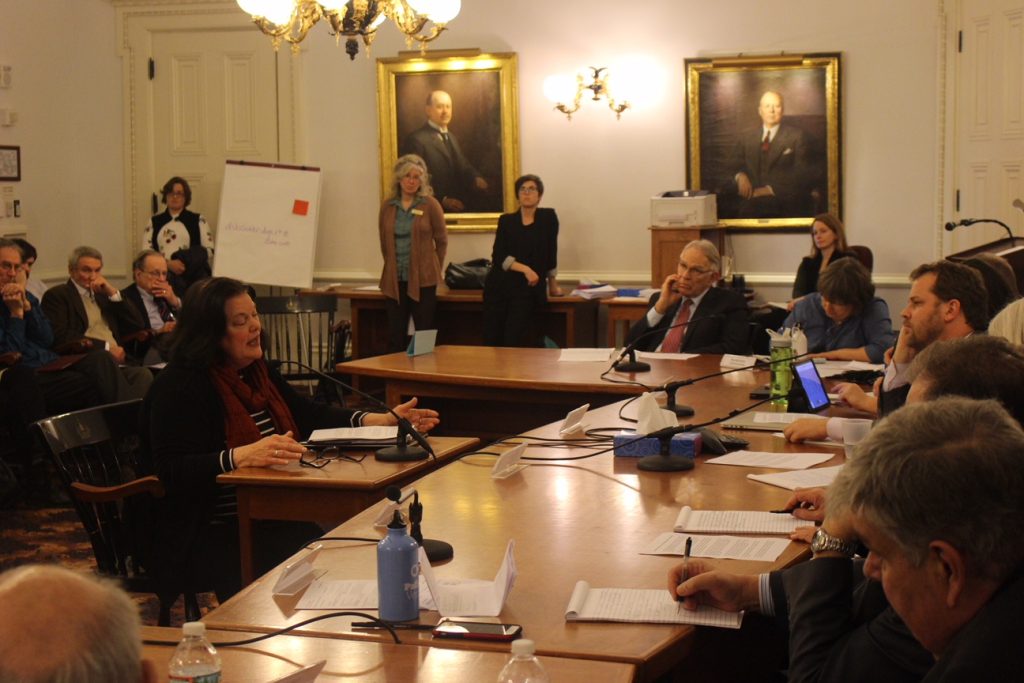 TAX REFORM: Karen Lafayette, of Burlington, a former state legislator, talks to the House Ways and Means Committee on Wednesday regarding a proposal to overhaul the education funding formula.

MONTPELIER, Vt. — Members of the House Ways and Means Committee on Wednesday heard from the public regarding a new proposal to dramatically shift the way education funding is done in Vermont.

The big pieces of the proposal include a 48 percent reduction in the homestead property tax rate, elimination of the income sensitivity program, and no more transfers of money from the state budget to the state education fund. Instead, workers and businesses would make up the difference through a new school income tax on workers, businesses, renters and investors.

Business owner David Logan has more than 200 employees and a $12 million payroll to manage for Autumn Harp in Essex Junction, a natural cosmetics company. He said he’s not thrilled to hear about a potential corporate tax increase of 24 percent.

“I believe that would put us second only to California,” he said. “We recently expanded our facility, we spent $11.5 million. If I had gotten any truth with the economic development folks that you’d be increasing our taxes by 24 percent, we would not have made that expansion. We would have invested outside Vermont.”

Logan added that he recently passed on an additional investment in the state of $1.5 million “because of the business climate.” And he reminded that neighboring states already have a great advantage when it comes to tax climate, citing a brother who owns a business in Massachusetts and pays 5.1 percent.

“So the money that goes to me as a Vermont resident, I will pay another 6 percent,” he said. “What do you think that drives me to do?”

One recurring theme among other speakers was to take it slow on the reform process.

Geo Honigford, president of the Vermont School Boards Association, said school boards will be presenting their budgets for Town Meeting Day votes in two weeks, and many people would want to know how this will impact their taxes.

“That puts us in a pretty awkward position,” he said. “So, we’re not opposed to this happening, but let’s slow it down for this year.”

Lauren Poster, of Marlboro, who was a former school board member, reiterated Honigford’s comments.

“As you are well aware, we’ve put our budgets to bed and there’s going to be Town Meeting in a couple of weeks,” she said. “I there’s a lot to dig into here and I really commend you for trying to rethink how to fund schools in the state. I also have concerns about unintended consequences and I don’t want this to be rushed.”

Karen Lafayette, of Burlington, a former state legislator, made a number of requests for the proposal.

“Having been on the Ways and Means Committee when we passed Act 60, I understand that sometimes legislation is somewhat complicated,” she said. “But I thought one of the goals of this new system would be to simplify and to have the legislation be more transparent, and that any local consequences from spending decisions would be spelled out clearly and have a direct result.

“I would hope that any plan maintains equity, and I think that is the most important component of education financing.”

She observed that the bill does not change the amount of money collected but rather shifts who pays it. She said if such a plan is enacted, a big component should be an analysis of this cost shift impact on everyday Vermonters.

Allen Gilbert, of Worcester, who served as the former executive director of the American Civil Liberties Union of Vermont, offered his thoughts on the reform proposal.

“Its goal is to move to a straight income tax for financing a state block grant, but then it turns back to the property tax for funding of the block spending. Homeowners’ income won’t matter for the second-tier tax,” he said.

“I urge you to build on the reform promise of the bill and move all residential taxpayers to a system where all school taxes are based only on income. That would create a more equitable school tax system and it might even raise more school revenue.”

Nick Ecker-Racz, of Glover, advocated that whatever changes are made, they need to be simple.

“What we had before was a nightmare — nobody understood it,” he said. “And then we had reform, and people understood it even less. If you can come up with something that is simple, that everyone can understand, then I think that would be remarkable.”

He added that there are underlying issues driving school budgets regardless of how the money is collected.

Ways and Means Chair Rep. Janet Ancel, D-Calais, indicated that her committee will try to decide the proposal’s fate by the end of this week.