With much of the nation abuzz about NFL players kneeling to protest America’s national anthem and flag, some Vermont politicians say they endorse “taking a knee.” 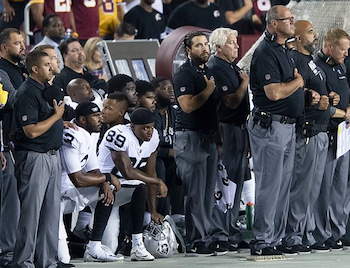 POLITICAL FOOTBALL: The national anthem is a moment to honor the nation, flag and military, but some — including some Vermont politicians — support taking a knee to make a political statement during America’s most popular patriotic ritual.

The fiasco started in 2016 when San Francisco 49ers now-former quarterback Colin Kaepernick began taking a knee during the anthem to protest supposed police violence against blacks.

This year the protest gesture spread to other players and teams, and now the NFL is facing a backlash from angry fans in the form of boos, lagging attendance and declining TV ratings. The NFL is now the least liked sport.

The practice hit a crescendo two Sundays ago when 200 players around the NFL took a knee or didn’t show on the field for the anthem. Days earlier, President Donald Trump said that players disrespecting the nation during the anthem should be fired.

“Wouldn’t you love to see one of these NFL owners when somebody disrespects our flag to say get that son of a bitch off the field,” Trump said during a rally in Alabama.

Since Trump jumped into the cultural battle, the debate has turned sharply in Trump’s favor, with fewer players and teams allowing the protest to continue. On Sunday, Vice President Mike Pence walked out of the game between the Indianapolis Colts and the 49ers when about 20 San Francisco players took a knee during the anthem.

I left today's Colts game because @POTUS and I will not dignify any event that disrespects our soldiers, our Flag, or our National Anthem.

Back in Vermont, numerous politicians are siding with public acts of anti-patriotism toward the nation.

Democrat gubernatorial candidate James Ehlers jumped into the controversy with the following message on his Facebook page.

“I do have strong feelings about it, as a veteran,” Ehlers told True North in an interview.

He said he’s been an outspoken veterans advocate for years and advised Sen. Bernie Sanders, I-Vt., on veterans issues.

“Not all veterans think alike, so I’m not speaking on behalf of all veterans, but the whole notion of people trying to re-frame why these athletes are peacefully demonstrating is, I think, a partisan division tactic.”

He referenced the John Carlos and Tommie Smith salute at the 1968 Olympics as an inspiration to himself and perhaps some of the athletes who took part in these demonstrations.

“That was during the playing of the national anthem at the ’68 Olympics, at the height of what people considered the civil rights struggle, Martin Luther King having just been assassinated,” he said.

He said he began defending Kaepernick a year ago on social media, “when he was being called a spoiled punk and a lousy football player just trying to attract attention to himself.”

“As someone who’s worked on social justice issues, institutional racism is still alive and well,” he added.

“For me the quagmire isn’t so much about the action itself, it’s about the root,” she said. “It’s about having history in this country of unequal treatment of people of different races.”

Johnson said she and her colleagues have shown solidarity by backing fair and impartial policing and by looking at demographic disparities in education.

“There’s a big inequity in education systems — in race and incarceration, and even in race and being pulled over for traffic stops,” she said. “We see these issues with incarceration here in Vermont as well.”

She added that those who say honoring the anthem is important should look at their own behavior, even at home.

“I’ve been to plenty of Super Bowl parties or Sunday afternoon games at home and people are continuing to talk over [the national anthem] and chow on nachos. It’s far more disrespectful than quietly and intentionally, and very respectfully, taking a knee.”

State Sen. Anthony Pollina, P/D-Washington, also weighed in on the topic, characterizing the protests as “appropriate.”

“I think that what the coaches, owners and players are doing is appropriate and I think it’s certainly their right to do so,” he said. “It takes some real courage, and I’m glad that the people on the teams are standing together to stand up for what they believe in.

“It’s a form of silent protest, which is [part of] being a democracy, which is good,” he said.

Asked what his message would be to those in the state with veterans in their family or who may have lost loved ones fighting for the country, he had this message.

“The issue had to do with the relationship between black Americans and law enforcement, and as we all know there’s been a lot of problems, a lot of violent murders of black men by law enforcement,” Pollina said.

Yet he criticized Trump for expressing his free speech about the matter.