POWNAL, Vt. — It came dressed up as a local initiative to spur Vermont’s first “climate change economy,” but some residents say the Climate Economy Model Communities Program originates from Montpelier and is being implemented illegally.

The Vermont Council on Rural Development wants to turn Vermont towns into model communities for climate change. In April, the statewide group selected the small southwestern town of Pownal to be the first success in what it calls the Climate Economy Model Communities Program. 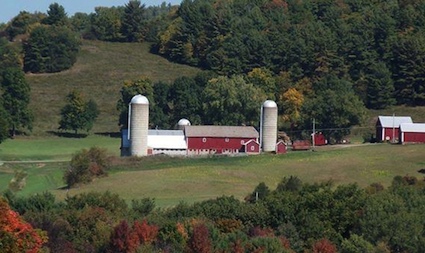 FOR CLIMATE CHANGE: Outside groups have selected the bucolic town of Pownal, Vt., to make Vermont’s first “climate economy,” as a response to climate change. (Photo courtesy of town of Pownal)

The program’s goal is to green the local economy with energy efficiency initiatives, green commerce opportunities and guidelines for energy use. In Pownal, the climate change program is cleverly named “Empower Pownal,” giving the appearance of a local initiative. As the program spreads to other communities, it presumably will be repackaged and branded as a grassroots effort of other towns.

On Tuesday night, Jon Copans, director of the Vermont Council on Rural Development, was in Pownal for a community visit to brainstorm green-themed projects for the town. More than 100 residents attended the meeting.

Five initiatives that emerged from the session include expanding trail systems, boosting agriculture businesses, making better use of buildings to promote jobs, building a cooperative food producer network and starting a Green Up-style project that continues year round — benign ice-breaker initiatives selected out of a possible 16 presented.

But while Copans hopes to roll out his Montpelier-based group’s agenda in local communities, some Pownal residents say the town is fine as is, and doesn’t need outside change agents to turn it into someone’s idea of “a model community.”

Melissa Collins is among the local residents who want the program to be subject to open meeting laws, public comment and town-wide votes. She has launched a petition to make that happen.

“We aren’t allowed to vote on any of the initiatives coming out of the program that could change the very make-up of our town,” Collins told True North. “They are fast-tracking the program and going all over the state, city by city. Middlebury is next.”

At the invitation of the Selectboard, Collins and about two dozen concerned residents were among those who attended Tuesday’s meeting. The meeting got off to a shaky start, however, as a series of questions were raised about the lawfulness of the meeting itself, and the initial application for the model communities program.

“‘No resolution, rule, regulation, appointment or formal action shall be considered binding, except at an open meeting,'” said Pownal Planning Commission member Bonnie Cutler, quoting Vermont’s open meeting statute. “The application, the meetings and tonight’s vote are all occurring in violation of the above mentioned rules.”

The flap stems back to how the application was filed. Instead of being authorized by a municipal body, as required by law, the application was filed at the request of a single individual, Planning Commission member Shannon Barsotti. While Barsotti’s action got a personal endorsement from the chair of the Pownal Planning Commission, Mike Slattery, it wasn’t properly put forward for open meeting and public comment.

As a result, Cutler on Tuesday moved to halt the meeting until the commission could discuss re-applying for the initiatives in open meeting.

Jason Olansky, vice chair of the Pownal Selectboard, told True North that despite the opposition of some residents, the initiatives suggested for the town came from locals.

“I think (people generally supported it), but there was definitely a group that didn’t,” Olansky said. “There was a group that’s adamantly opposed to it.”

“The VCRD will help us now look for avenues for funding. Some of the trail funding should come from the Vermont Youth Conservation Core, as they have an expressed interest in coming down and doing some trail work,” he added.

Local resident Bob Jarvis is among the program’s many skeptics. He says few people in town recognize that the program is prepackaged from the VCRD-sponsored action plan of the Vermont Climate Change Economy Council, and published in a 40-page report called “Progress for Vermont.”

“The individuals who spearheaded this had not read that report and don’t know how this program fits into Vermont’s overall climate initiative. I find that troubling,” Jarvis told the Pownal Planning Commission on July 18.

“Why are we treating this as though it’s some Pownal-driven process instead of action item No. 6 out of seven action items that is ‘Progress for Vermont’?” Jarvis said. “This is a state-down process being portrayed as a Pownal-up process.”

Jarvis said while Pownal residents participated in choosing the five goals, it was done “within a narrow frame” of the VCRD. Jarvis and others worry that many aspects of the pre-packaged agenda will infringe on private property rights.

Despite the prepackaging of the model communities program, a VCRD recap of the June 24 forum for Pownal claims the results are grassroots.

Jarvis said his biggest concern so far is not what has transpired at the meetings, but the text of the application sent to the VCRD to launch the program.

“The application addresses Pownal’s willingness to use taxation and other regulatory tools to encourage ‘smart growth,’” he said at Tuesday’s meeting.  “… (This means) reward and punishment to ensure individual decisions are in line with central planners’ vision for how other people should live their lives.”

The application written by Planning Commission member Shannon Barsotti reveals a massive reorganization of the town’s energy and land use:

In response to the increasing rate of climate change, Pownal must accelerate the conversion from fossil fuels to renewable energy resources and more fuel-efficient means of transportation. Land development patterns should promote energy conservation and efficiency.

To accomplish this goal, the town should encourage compact development centered around the three villages, with low-density uses and conservation emphasized in outlying areas.

At the meeting, Rural Development Executive Director Paul Costello said there are no hidden motives at work.

“Nobody (has said) let’s have a wind project in this town, nobody said let’s have a solar in agricultural fields — those things aren’t on the list,” Costello said.

Images courtesy of Sarah Swenty/U.S. Fish and Wildlife Service and town of Pownal