EAST MONTPELIER — Washington Electric Co-op is proposing to raise its electric rates by 5.95 percent, and the utility estimates that at least 1.67 percent is due to net-metering solar installations.

On Wednesday night, the Public Utility Commission held a public hearing at the Old Brick Church about the rate increase, which was proposed last summer. In attendance were a handful of local residents concerned about the higher cost of power.

With net metering, a homeowner or group of owners purchase solar installations to power their homes, and the excess power they generate is sold back to the utility at a premium. In Vermont, legislators have mandated that utilities pay these owners almost double the price that the utility normally pays for power.

If approved by the Public Utility Commission, the rate increase would be retroactive, starting Jan. 1 of this year.

Those in attendance, including GOP gubernatorial candidate John Klar and state Rep. Robert LaClair, R-Barre Town, expressed frustration about the economics of net metering. They complained that the system forces ordinary ratepayers to pay more for electricity due to the customers who participate in net metering.

Gail Graham was one of the disgruntled Washington Electric ratepayers who spoke out. 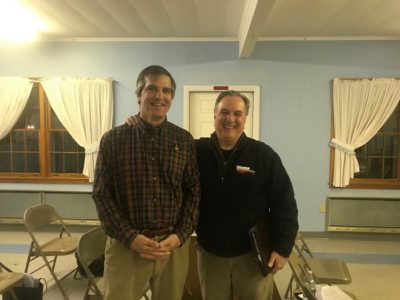 “Now I’m feeling like I’m being penalized because I’m not buying solar panels,” she told Joan White, who was representing the Public Utility Commission. “I have absolutely no control over this — I have to have electricity.”

Another resident, Carol Hebert, said the issue comes down to basic fairness.

“I started looking into it a little bit and I said this is not fair — it’s really not fair that people are choosing to be more efficient and we’re making up that cost,” she said.

Hebert cited a Vermont statute that states that those who don’t invest in net-metering must not be forced to share the cost with those who do.

Klar, a lawyer and farmer from Brookfield, also cited this statute as reason for his frustration with the power company.

“It specifically says that, to the extent feasible, you guys will ensure that the net metering does not shift costs including in each retail electricity provider’s revenue requirement between non-metering customers and other customers,” he said.

“So if I understand it correctly, the state of Vermont is taking money from taxpayers to subsidize those who have the facilities and the money to buy panels and then having ratepayers like Gail … subsidizing it.”

Washington Electric Co-op Executive Director Patricia Richards said she has been warning state regulators about the inequitable economics of net metering for a long time, and she encouraged those at the meeting to relay that message.

“Net metering definitely drives the lender ratio bit [financial reserves required for borrowing], because I’m collecting less from all of you in terms of the total amount of revenue that I need,” she said.

Richards explained that if there were 10 customers and two of them do net metering, she needs to collect from the other eight to make up the difference for the extra money needed for the two with net metering. She said that the utility has to pay about 19 cents per kilowatt-hour for power sourced from net metering customers.

She told the audience that this is all the Legislature’s doing.

“The Legislature told the Public Utility Commission that you shall go do this,” Richards said. “So it’s not Joan’s fault, it’s not the Department of Public Service’s fault. I’m going to blame the legislators. Are there any legislators in the room?”

LaClair, the only legislator in the room, responded with his own question regarding how much of the time the turbines at the 40-megawatt Sheffield Wind installation — which Washington Electric purchases power from — are actually creating power.

Richards said while it’s technically operating 90 percent of the time, it’s only functioning at an average 30 percent of its total capacity. By comparison, the now-closed Vermont Yankee nuclear power plant operated at about 96 percent capacity.

Another renewable energy mandate that is forced on the utilities and passed onto ratepayers in the form of higher prices are the subsidies for electric cars and heat pumps. All Vermont utilities offer “greener” options to comply with Tier 3 of the state’s Renewable Energy Portfolio Standards.

“If we didn’t give away money to do these incentives and we didn’t get people to do some stuff on EVs and heat pumps, we end up paying a fine of $60 a megawatt-hour,” Richards said.

Yet another mandate is the efficiency charge, which is money taken from the ratepayers to fund Efficiency Vermont, an efficiency program created by the Vermont Legislature. Known best for the weatherizing of homes, Efficiency Vermont has now expanded into the business of subsidizing electric cars and heat pumps.

“Not everyone knows about that program or a lot of people aren’t going to qualify for it,” Hebert said. “You get some elderly people who live in an apartment, and they pay their electric bill, the landlord owns all of the utilities. They are paying an energy efficiency payment mandate and they are never going to get anything from it.”