A majority of Democrats do not want President Joe Biden to run for reelection in 2024, according to a new poll. 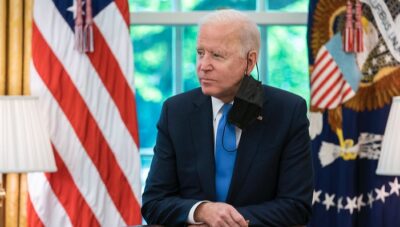 This trend was particularly stark with younger voters, with 94% of Democrats under 30 saying they wanted a different candidate in 2024.

At the same time, the poll found only 13% of voters think the nation is on the right track.

Record high gas prices last month, soaring inflation, and troubles abroad have all helped drive Biden’s support down. The poll found that Biden’s job performance and age are top reasons for his loss of support among his own party.

Biden is 79 years old. Overall, his approval rating dropped to 33% in the poll.

Meanwhile, incumbent lawmakers as a whole have seen a dip in their approval from the American people. Gallup released polling data Monday showing Americans are nearly split on whether their incumbent deserves to be reelected.

“A slim majority of U.S. registered voters, 53%, say their representative in Congress deserves reelection, while 41% disagree,” Gallup said. “The percentage endorsing reelection is similar to what Gallup has measured in its final pre-election reading in most recent midterm election years, ranging from 50% in 2018 to 54% in 2006 – except for 1998 and 2002, when voters were much more positive about reelecting their representative.”

Voters do, however, prefer their own representative over others nationwide.

“U.S. voters can decide only whether their own representative, if seeking reelection, gets another term,” Gallup said. “But voters are much less inclined to believe that most members of Congress deserve reelection than to think their own member does. In the latest poll, 21% of registered voters say most members of Congress are worthy of another term, while 77% disagree.”