Three out of four Americans support significant abortion restrictions and say that abortion should not be legal after a woman is three months pregnant, according to a nationwide Tuesday poll.

Not only do a majority of Americans, party aside, support abortions restrictions, but 59 percent of Americans also support banning abortion after 20 weeks except to save the life of the mother, according to the Tuesday Marist Poll. 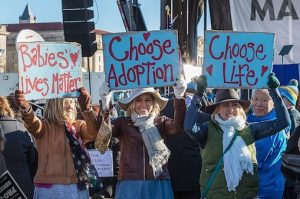 Sixty-percent of Democrats support restricting abortion after a woman reaches three months in her pregnancy, the poll reveals.

The pro-choice and pro-life labels, however, are highly inadequate and don’t accurately reflect the nuances of opinions on abortion, Knights of Columbus Vice President Andrew Walther said on a phone call with media Tuesday.

The Knights of Columbus partnered with the Marist Poll to conduct the survey. The poll’s data was collecting by surveying a nationally representative sample of 1,066 adults between Jan. 8 and 10.

The Knights of Columbus is a volunteer organization that does charity work in America, Europe and Asia.

According to the poll, 49 percent of Americans think that if the U.S. Supreme Court reviews and reconsiders a ruling on Roe V. Wade, it should allow states to restrict abortion access. Another 16 percent think the court should make abortion illegal.

“As in past years, this poll shows that the pro-choice label on the abortion issue is simply insufficient,” Knights of Columbus CEO Carl Anderson said in a statement, according to the poll. “The majority of Americans – in both parties – support legal restrictions on abortion.”

Seventy-five percent of Americans also oppose taxpayer funding of abortion abroad, according to the poll.

The poll’s release comes ahead of Friday’s March For Life in Washington, DC.

2 thoughts on “Poll: 75 percent of Americans support restrictions on abortion”