Despite losing part of his base to a rival conservative candidate, Gov. Phil Scott on Tuesday won the Republican gubernatorial primary and now must face Christine Hallquist, a liberal Democrat and the nation’s first transgender major-party nominee for governor.

After a raucous internecine battle over gun control measures he signed into law in the spring, Scott emerged a big winner against fellow Republican Keith Stern, garnering 65.4 percent of the vote with 272 of 275 districts reporting. The incumbent governor defeated the Springfield resident by a vote of 24,142 to 11,669. 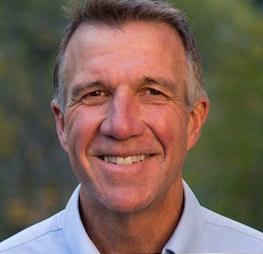 “I want to thank those Republicans who have stuck with me through thick and thin, and all those who have put aside partisanship to engage in the primary. It says something very important,” Scott said in his acceptance speech.

“I know there are some who are still upset with me, who may not welcome tonight’s result, but there is so much more that unites us than sets us apart,” he said.

Scott touted a 19-month record as governor that included reducing income tax rates by $30 million, eliminating the tax on Social Security for some Vermonters, and preventing a $71 million property tax rate increase. He said his administration has expanded treatment for opiate addiction, invested millions in affordable housing and presided over a 4,500-person rise in the labor force.

Hallquist, the former CEO of the Vermont Electric Cooperative, ran on a highly progressive agenda of universal health care, a $15 minimum wage, 90 percent renewable energy by 2050, and high-speed fiber-optic internet for every home. She defeated her three rivals by garnering 27,622 votes, about 39.4 percent of the 70,007 votes cast in the Democratic primary.

“Hallquist supports nearly $100 million in new tax hikes, including tens of millions of dollars in property tax hikes that would take the state backwards,” RGA spokesman John Burke said. “Vermont must keep moving forward and that is why voters will reject Christine Hallquist this November.”

Other races of interest

In the first state primary election since 2016, Vermonters cast their ballots Tuesday for a variety of candidates including governor, the U.S. Senate and House, several state office posts, and state legislative spots.

In the race for U.S. Senate, Sen. Bernie Sanders easily won while running on the Democratic Party ballot. Sanders’ challenger on the Republican side will be H. Brooke Paige, who narrowly defeated Lawrence Zupan by a count of 9,782 to 9,308.

Paige also won the Republican nomination for U.S. House, setting up a run against Democrat U.S. Rep. Peter Welch, who handily defeated Dan Freilich with almost 81 percent of the total votes. The Washington resident has said he plans to withdraw from the race to let the Vermont GOP pick a better-known candidate to run against Sanders and Welch.

In addition to challenged U.S. House and U.S. Senate races, Paige ran unopposed for attorney general, secretary of state, treasurer, and auditor of accounts, all on the Republican ticket.

Keith Stern’s perceived lack of polish and weakness in discussing a variety of issues, turned off enough Republicans to send the governor on to the general election in November.

In his race against Scott, Stern made the governor’s flip-flop on gun control the primary focus of his campaign.

Scott supported gun-control measures earlier this year, which angered many conservative voters. But in the end, Stern’s perceived lack of polish and weakness in discussing a variety of issues helped Scott skate to victory.

The governor also had the endorsements of former Gov. Jim Douglas of Middlebury, and former Lt. Gov. Brian Dubie.

“I know how hard it is to be governor, and I’m impressed with the job Phil Scott has done,” Douglas said. “He’s been a strong leader in his efforts to grow the economy and make Vermont more affordable, and we desperately need him to continue this work in Montpelier.”

But Stern didn’t mince words when it came to criticizing Scott for embracing left-wing social agendas.

“Our governor has forgotten who elected him and why,” Stern posted Monday on his campaign’s Facebook page. “He has turned his back on the gun owners groups who he met with and promised there would be no gun legislation signed by him. Then he took the opportunity to rub their faces in it as he made a big show of it signing it outside the capital with gun owners watching.”

In Chittenden County, all six incumbent state senators won their party’s nomination to run for re-election in the fall. Senate President Pro Tem Tim Ashe was the top vote-getter with 13,521 votes. State Sen. Chris Pearson got in with the least amount of votes among the incumbents, with 9,026.

Republicans, hoping to break up that six-pack of liberal senators, picked Alex Farrell with 3,598 votes. Dana Maxfield came in a close second with 3,325 votes.

In-fighting between Paige and Zupan

During the GOP U.S. Senate primary contest, Zupan and Paige were like oil and vinegar poured into the same constricted cruet bottle.

Paige, a multi-office candidate who perturbed both Secretary of State Jim Condos and some Republican leaders for acting as a self-appointed party “place holder,” said he runs for multiple positions to stop Democrats from writing-in inferior candidates in the Republican primary to “sabotage” the ballot — a subversive activity made possible in Vermont’s open primary system.

On Monday, Paige posted a political ad designed to tweak Zupan, who sometimes is seen in photos crossing his arms.

“Angry Larry,” Paige posted. “One of the common mistakes inexperienced presenters make in public appearances relating to body language is mistakenly crossing their arms in front of them. This stance not only sends a message of … defensiveness and unapproachability, it also betrays feelings of nervousness and a lack of confidence.”

Zupan’s campaign aide and relative, Zachary Zupan, challenged Paige with his own Facebook putdown related to various characterizations between the two rivals. In one instance, he accused Paige of not having “his facts straight on such a simple and petty smear.”

Paige also took a Facebook jab at 1970s former Vermont Assistant Attorney General Bob Orleck, of Randolph, who has been a critic during the 2018 primary campaign.

“Bob Orleck thought he was so smart criticizing me in a Rutland Herald and Times Argus (guest commentary) which was published on Friday in violation of their self-imposed seven-day exclusion rule,” Paige posted. “Bob chose to castigate me for running to protect the Republican primary ballot from Democrat mischief, I must assume he has no problem with their fooling around with the propriety of the election, just like Jim Condos.”

Orleck offered a retort that “if Mr. Paige wants to play the game as the self-proclaimed protector of the Republican Party ballot, I guess it is his choice if the rules so allow, especially considering the pathetic state of the situation when it comes to available candidates.”

Since Vermont law calls for open primary elections, voters are not required to register with a political party. Three ballots are issued — Democrat, Republican and independent — with voters choosing one of the three. Winners of Vermont primary elections are decided by a voting plurality: the candidate with the highest number of votes wins. Primary candidates in the Green Mountain State can win even without a majority of votes cast. However, if a tie occurs, a runoff election must follow by law.

Lou Varricchio is a freelance reporter for True North Reports. Send him news tips at lvinvt@gmx.com. Bruce Parker contributed to this story.