Since the Great Recession, tax revenue in 41 states is at a new record high, according to data released by The Pew Charitable Trusts. During the third quarter of 2018, tax revenue rose in all but five states, after accounting for inflation.

Revenue collections were boosted in part by the 2017 federal Tax Cuts and Jobs Act (TJCA), the report notes, in addition to robust stock market returns. However, tax law revisions resulting from the TCJA have introduced a certain level of uncertainty into state collection trends, the report notes, suggesting that some recent tax revenue gains could be temporary. 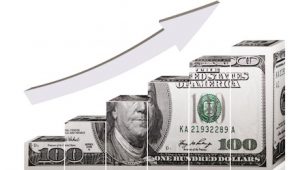 Revenue collections were boosted in part by the 2017 federal Tax Cuts and Jobs Act (TJCA), the report notes, in addition to robust stock market returns.

Tax collections determine in large part the ability of states to deliver public goods and services to its residents, and states’ abilities to deliver them, the report notes.

While tax revenues increased since the recession, spending has also, the report notes.

Despite posting gains, policy makers may face pressure to make up for spending and investments or restore rainy day funds that they had to cut or defer during the recession, the report notes.

Colorado’s tax revenue recovery can largely be attributed to economic growth and increased population, Theal explains. Colorado’s economy, as measured by growth in total personal income, has outperformed the national trend since the recession, and has experienced the third-fastest population growth in the U.S. over the past decade, he said in an email.

The Land of 10,000 Lakes was among the earliest to see its tax revenue fully bounce back from the downturn, after accounting for inflation, in late 2011, the Pew report notes. It was also the sixth state to recover to its recession-era level of tax collections.

Minnesota’s tax revenue recovery can be attributed to economic growth, population increases, and state tax policy changes, according to the report.

Also in the top ten, with the eighth-greatest tax revenue rebound was Nevada. More than half of the state’s tax revenue comes from general sales taxes, which increased in every quarter over the past 6.5 years, the report notes. As of the third quarter of 2018, Nevada’s total tax revenue was 22.4 percent above its peak recorded in late 2006, after adjusting for inflation.

Like Minnesota, Nevada’s tax revenue recovery can be attributed to economic growth, population increases and state tax policy changes, according to Pew.

Nevada has posted the seventh-fastest population growth over the last decade. Its annual increases in total state personal income has outperformed the U.S. trend every year from 2014 to 2018, and the Legislature under Republican Gov. Brian Sandoval enacted historic tax increases in 2015.