The Pentagon is prepared to extend the National Guard’s presence at the U.S. Capitol for an additional two months, defense officials said Tuesday.

Defense Secretary Lloyd Austin is expected to give final approval, though Pentagon officials told The Associated Press that final details were still being discussed. 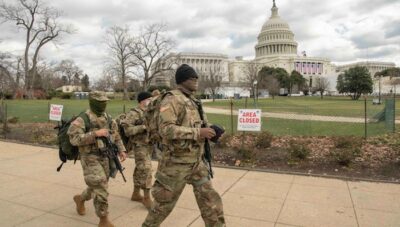 At least 25,000 National Guard men and women were authorized to conduct security, communication and logistical missions in support of federal and District authorities leading up and through the 59th Presidential Inauguration in January.

Without an extension, Guard members would leave Washington, D.C., on March 12, the original deadline for them to stay, according to the AP. The extension has led to pushback from multiple governors who say they will not keep their Guard deployed at the Capitol.

“I do not have any intention of agreeing to an extension of this deployment,” Michigan Democratic Gov. Gretchen Whitmer said at a March 2 press conference, the Detroit Free Press reported.

The coming extension highlights concerns over potential violence at the Capitol two months after a mob of Trump supporters stormed the building as lawmakers certified President Joe Biden’s victory.

The riot left five people dead, including a Capitol Police officer, and resulted in the installation of fencing around the Capitol, White House, and other nearby areas.

Multiple reports said that more violence could occur on March 4, when a false QAnon conspiracy claimed that former President Donald Trump would again usurp the presidency, but the day passed with no problems.

Law enforcement officials and members of the National Guard set up security perimeters ahead of Biden’s inauguration on Jan. 16, 2021 in Washington, D.C.

The National Guard’s deployment in early January has not been without controversy.

Thousands of guardsmen around the Capitol were forced off the building’s grounds and into freezing parking garages, with as many as 5,000 troops sharing one bathroom. In early March, dozens of Michigan National Guard troops got food poisoning after eating undercooked food, while some said they found metal shavings in their meals.

Guardsmen at the Capitol have been given access to facilities in congressional buildings for their on-duty breaks since the controversy, the AP reported.

The cost of deploying the approximately 26,000 troops around the Capitol approached $500 million, and it is unclear how much more it will cost to keep them stationed.