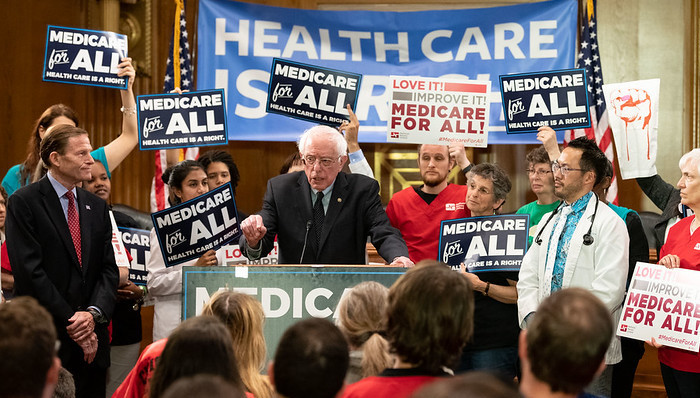 FOR BETTER OR WORSE?: According to a recent study by The Heritage Foundation, nearly two-thirds of households comprising of nearly 3 out of 4 Americans will be worse off under Sanders’ new taxes.

Single-payer health care has become a mainstream position and popular talking point for Democrats, who promise government-sponsored coverage for all Americans.

But they’re often less talkative about the questionable availability of that coverage and the specific means of paying for this kind of health care.

Sen. Bernie Sanders, I-Vt., has been clearer than others about the need to raise middle-class taxes to pay for his “Medicare for All” program. The point is to replace costs on households from health care with more taxes, which would, Sanders assures us, save families money.

This is just wishful thinking.

According to a recent study by The Heritage Foundation, nearly two-thirds of households comprising of nearly 3 out of 4 Americans will be worse off under Sanders’ new taxes.

Sanders has not provided many specifics on how his tax scheme would work, but Medicare is financed in large part by payroll taxes. To finance his Medicare for All plan, the federal government would have to add an additional tax of 21.2% to salaries and wages.

According to the study, an average household of four earning a median combined income of $98,000 would lose more than $9,000 in disposable income because of the tax increase.

Employer-based health insurance spending is deductible, and since Medicare for All would eliminate all private coverage, it would expose more of a person’s income to taxes. Average households thus would save $15,199 on premiums and out-of-pocket expenses but pay an additional $24,329 in taxes.

Sen. Elizabeth Warren, D-Mass., is another prominent proponent of a single-payer health care and a co-sponsor of Sanders’ Medicare for All bill.

Warren’s assertion is that health expenditures would remain constant and all premiums and out-of-pocket expenses would simply return to people.

The remaining cost differences, $11 trillion according to her website, can be made up with “targeted spending cuts, new taxes on giant corporations and the richest 1% of Americans, and by cracking down on tax evasion and fraud.”

Politicians have always promised to find money by cutting down on fraud, waste, and abuse, and it is unclear how Warren will be more effective than any other politician, much less be so effective as to be able to fund the $11 trillion in increased spending.

Also, the top 1% already pay an especially large portion of the tax burden, so it is unclear how much more tax revenue can be generated from them while avoiding the middle class.

As far as her “target spending cuts,” she provided some detail in a recent tweetthat announced the launch of her plan. The target for her cuts would be to the Department of Defense—specifically, its “slush fund.”

This may refer to the Pentagon’s overseas contingency operations fund, which has been used as a way to continue funding major overseas operations and avoid sequestration from congressional budget stalemates.

Unfortunately for Warren, in 2019, Congress appropriated $77 billion for this fund, so even if she applied the entire account to Medicare for All, it would come well short of the trillions of dollars she will need.

The military budget is a popular target for cannibalizing because the armed forces provide a tangible symbol for government spending. But Democrats often forget the defense budget is actually smaller than Social Security and Medicare and other federal health care spending.

To illustrate the point, the cost of maintaining and operating the Navy’s 11 nuclear-powered fleet carriers, along with their aircraft and escort complement of destroyers, cruisers, and attack submarines, all of which are only a portion of the defense budget, costs less than current federal expenditures on health care, which currently only covers a portion of the U.S. population.

How much of the Defense budget can she cut to pay for coverage for the rest of America?

None of Warren’s revenue-raising plans seem like they can plausibly pay for her vast expansion of government spending. It seems inevitable she would have to raise taxes on the American middle class, the results of which have been analyzed by The Heritage Foundation in response to Sanders’ candidness.

Either way, Medicare for All would be impossible to fund without seriously penalizing the vast majority of Americans.