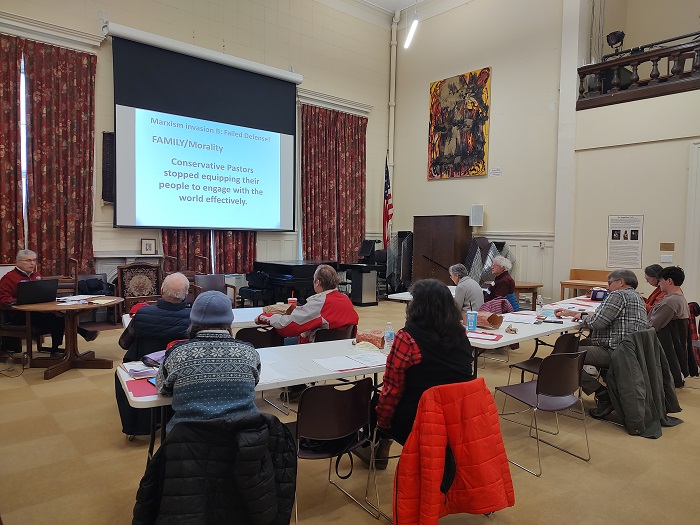 COMMUNISM IN THE USA?: Pastor Ed Wheeler spoke to concerned Vermonters on Saturday about how Marxist ideology has infiltrated various levels of American society.

RUTLAND — On Saturday, a pastor speaking at a symposium on Marxism lectured about the failed ideology’s influence on media, education, government institutions and other sectors of American society.

“They dominate so much of media — all your big TV networks and now even the social media and all those things are heavily dominated by Marxist evolutionary type thinking,” Ed Wheeler, pastor of Valley Bible Church in Middlebury, said during his presentation, which spanned six hours and covered various topics.

“Most of the government institutions by now are heavily dominated by Marxism, gobbling up and more and more of the competitive institutions instead of letting them maintain their integrity … they are doing their decision making for them,” he said.

The event, called “Americanism and Marxism Symposium,” was organized in part by Gregory Thayer, a Rutland resident and Republican candidate for lieutenant governor. The lecture took place in the Fox Room at the Rutland Free Library.

Wheeler said leaders within America’s largest institutions and industries are working to use fear of the pandemic to push measures that would otherwise be politically unacceptable.

“They had a purpose for the pandemic: To get rid of Trump, to rig the elections, to start imposing Marxism on the people — and we see this still playing out two years later,” Wheeler said.

He added that even the hospital system is corrupted by money tied to coronavirus policies.

“They’ve taken over hospitals just by offering them money if this many people die from the virus.  ‘You write it up and we’ll give you money for that,'” Wheeler said.

Hospitals have received government money for coronavirus cases and deaths.

He also said social justice institutions are infiltrated by Marxism. He pointed to the Black Lives Matter movement, which has been open about its support for Marxism as a major foundation.

Wheeler said that the public is waking up to the government overreach, and cited as an example the ongoing “Freedom Convoy” in Canada that has spread to convoys in multiple nations.

“Truth and scripture is on our side,” Wheeler said. “And people see it, these truckers, these people they sense something is false, that’s destroying them, and they are pushing back against it.”

One such convoy that is widely expected to pass through Vermont, VTDigger reported.

Wheeler also suggested that the true scope of the negative vaccine reactions is not getting full transparency.

“The worst possibility is that a lot of people are going to die,” he said.

“We have to have a lot of solutions and actions and they have to be practical,” he said. “They have to be something that we can actually do, like go to a school board and speak up.”

12 thoughts on “Pastor warns Vermonters about encroaching Marxism in America”