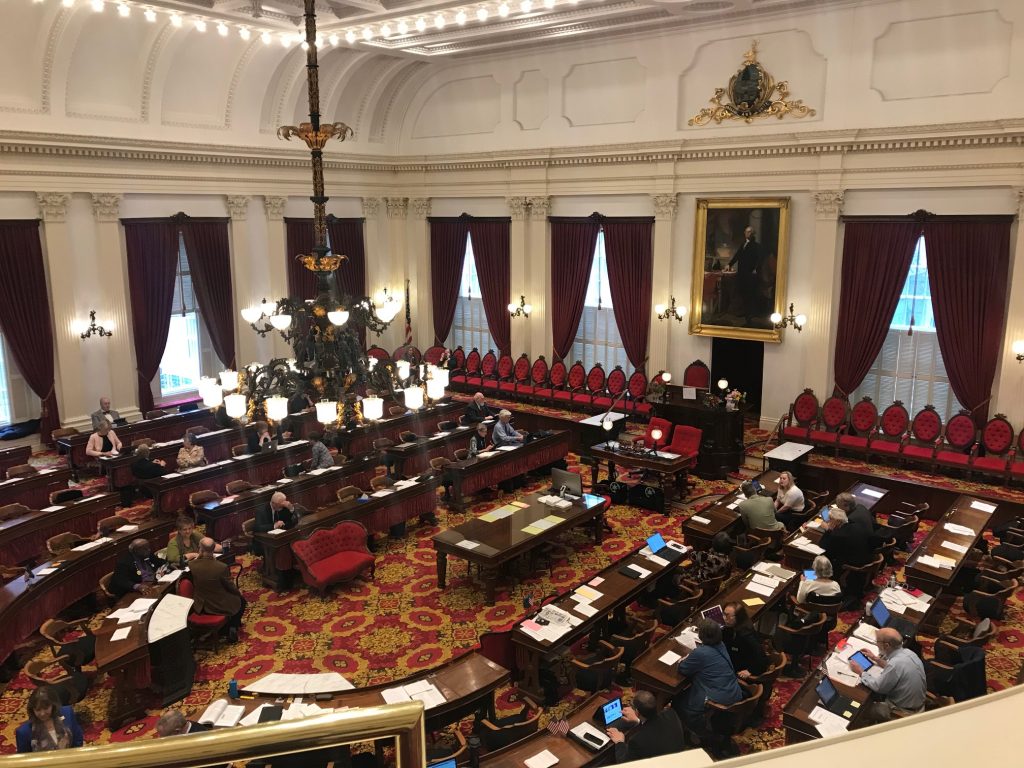 EMPTY HOUSE: A lot of sitting around and waiting — and blaming each other — is what took place at the Statehouse as the 19th week of an 18-week session concluded Friday afternoon.

MONTPELIER — House lawmakers on Friday voted to adjourn the 2019 legislative session and to reconvene in 2020 as they ended the year by failing to pass the top agenda items of the majority party: paid family leave and a $15 minimum wage.

House Speaker Mitzi Johson, D-South Hero, announced shortly after 4 p.m. that there would be no deal between the House and the Senate on the two key bills, putting and end to rumors that the Senate might strike a last-minute compromise that could send the session into a second week of overtime.

The day started in a stalemate, with both chambers blaming the other for the inability to get these bills done and wrap up the legislative session, which had already gone a week beyond schedule.

One of the final proposals was announced on Twitter early Friday afternoon by Lt. Gov. David Zuckerman.

All sides give, Vermonters gain. #vtpoli

This proposal was to bring the minimum wage up to $12.25 in just two years, and to abandon the aggressive plan of hitting $15.00 an hour by 2025, as proposed earlier in the legislative session.

Regarding the paid leave program, this proposal would have mandated that working Vermonters participate in a 12-week parental leave program and eight-week family leave program. Left optional was a six-week disability program.

The House had originally passed a more comprehensive family leave program which would have required more than $80 million in new mandatory payroll taxes.

The House also passed a version of the minimum wage increase that was tied to economic trends — it was to increase 2.25 times the consumer price index (rate of inflation).

Johnson and Senate President Pro Tem Tim Ashe, P/D-Chittenden, tried to reach an agreement at mid-afternoon, but not long after they realized a deal was not within reach.

With a new Democrat-Progressive supermajority in both chambers, many expected that one or both bills would become law this year. But the margins of passage grew slimmer over the course of the session, and hopes of being able to override an expected veto by Gov. Phil Scott were dashed.

Friday morning, Johnson wrote a letter to Ashe offering last-minute compromise. The letter outlined some of the House concerns about the aggressive two-year timeline to boost the minimum wage to $12.25.

“As I have repeatedly expressed, many House members are concerned about the effects of a steep minimum wage increase on small rural businesses and on the potential loss of services to Vermonters dependent on community agencies funded largely by Medicaid and Medicare,” she wrote. “You have not addressed those concerns in your proposals.”

The Republican leadership accused the majority of attempting to finalize these last two bills behind closed doors without representation from the minority party. House Minority Leader Pattie McCoy, R-Poultney, expressed her frustration in comments to True North.

“We’re here on the 19th week of an 18-week session,” she said Friday morning. “We’re waiting for two bills, the budget bill and the tax and revenue bill, which have been on their wall, and they chose to adjourn [Thursday night] instead of dealing with those and sending them over to us so that we can adjourn [Friday] and go home.

“My understanding is that they are holding all this up because they are striking some kind of deal behind some closed doors about paid family leave and the minimum wage of which we have not been privy to any.”

She said the House was being asked to suspend rules in order to take up the two bills, and she had advised her caucus not to support such a move.

“They want us to do this without even vetting them through the committees that should look at them — it’s just absurd,” she said. “We need to fully vet a bill that may cost taxpayers dollars. And to the notion that they are going to somehow send it over here and we’re gonna suspend rules and put it through all stages of passage to get it out of here today without even fully looking at what these bills actually do, is just not good governance.”

All the back-and-forth politics stirred a war of words between political opponents. The political group Rights & Democracy responded to comments by Rep. Heidi Scheuermann, R-Stowe.

Question is: will @GovPhilScott & the #VT GOP keep obstructing bills that are morally & economically the right thing to do for tens of thousands of Vermonters & are supported by a majority of the Legislature & Vermonters? #vtpoli https://t.co/CbOKXDEJ4s

Rep. Mari Cordes, D-Lincoln, expressed her frustration with fellow lawmakers on Twitter for failing to pass the two priority pieces of legislation.

“While I have respect for @MitziJohnsonVT for holding strong, I’m not interested in playing games with people’s lives. No one’s a winner with no paid family leave, not minimum wage. The House voted to adjourn the House to reconvene January 7th, 2020,” she wrote.