On Wednesday’s edition of the “Morning Drive” radio show, an outgoing House Democrat who has been in office for 30 years discussed the legal meaning of Proposal 5, a constitutional amendment going before voters that would protect unrestricted abortion in Vermont up until birth.

“I don’t think the language is vague at all, I actually think it’s quite clear,” state Rep. Ann Pugh, D-South Burlington, said on the show. “It’s based on constitutional, legal language that has been used before.” 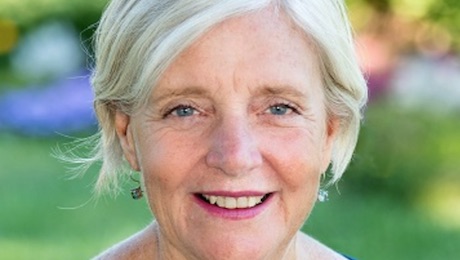 FOR ABORTION RIGHTS – Outgoing legislator Ann Pugh, D-South Burlington, is supportive of Proposition 5, which would create a constitutional right to allow access to abortion for all nine months of pregnancy.

Proposal 5 says, “That an individual’s right to personal reproductive autonomy is central to the liberty and dignity to determine one’s own life course and shall not be denied or infringed unless justified by a compelling State interest achieved by the least restrictive means.”

Opponents of the proposed constitutional amendment say the language is vague because it does not mention “pregnancy” or “abortion,” and because it provides men the same status on reproductive decisions as women.

Kurt Wright, one of the show’s hosts, pressed Pugh further on what impact the measure would have if passed into law in November.

“This is a big issue and it was in front of your committee [the House Committee on Human Services, which Pugh chaired]. … If it passes, what does it do?” he asked.

Pugh said it may ultimately be up to courts to interpret what the language of Proposal 5 really means.

“I guess I don’t know what to say really in terms of that,” she said. “If you go to the dictionary there is a plain meaning for a lot of those words, and like everything else the concept. If there are different interpretations of language, then the courts will first look to plain language and to the dictionary and they will make their own assertions.”

One unidentified caller to the program took issue with Pugh’s answer.

“I don’t think you should have to go to the dictionary to understand what this Prop 5 means. To me it’s a bunch of gobbledygook, and I can’t understand a word about it, and I will be voting no for this because I don’t think people should vote for something that they can’t even understand,” the woman said.

Pugh said she appreciates the caller’s position to not support the proposal, but added, “I totally disagree that the amendment is unclear.”

Critics of the proposal, such as the group Vermonters for Good Government, argues that the language will almost certainly require courts to weigh in on the meaning and application.

“The amendment language is very simple and short, but that makes it all the more open to judicial interpretation, and unintended consequences. It is intentionally vague and opens Pandora’s box, paving the way for many dangerous ramifications,” the group states on its website.

Earlier in the radio show, Pugh said Proposal 5 “protects an individual’s right to use or not use temporary or permanent birth control.” She said it also “ensures the right to carry a pregnancy to term.”

“Something that I think is really important is I don’t think this is a radical shift for Vermont; Vermonters have always had this right or this freedom,” she added.

Regarding the clause that details when and how the state may infringe upon or deny an individual’s reproductive autonomy, Wright asked what “by the least restrictive means” would entail.

“In fact there can be limitations or conditions, but they have to meet a high level of scrutiny of the state’s interest,” Pugh responded.

Wright suggested that Proposal 5 could have an unintended consequence: it may impact a health care provider’s right to refuse to participate in an abortion, potentially driving health care workers out of the industry.

“It’s been said that if health care workers are mandated to provide something because of this change related to reproductive autonomy, if it passes, will that impact the shortage that we are already experiencing with health care workers and increase the cost of relying on traveling nurses?”

Pugh answered that a health care provider’s right to refuse participating in abortion procedures “will not change.”

5 thoughts on “Outgoing House Democrat on Prop 5: The courts ‘will make their own assertions’”