SOUTH BURLINGTON — Two teachers are running for seats on the five-person South Burlington School Board, but a former board chair says there will be a serious conflict of interest if they win their races.

Richard Cassidy, who was chair of the South Burlington School Board for six years and a member for 12, told True North that since the teachers are represented by the Vermont NEA, issues could arise from teacher negotiations. 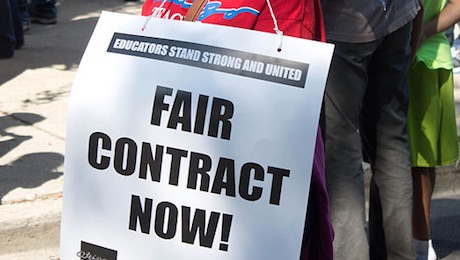 CONFLICT?: A former chair of the South Burlington School Board says two teachers running for the board will essentially “sit on both sides of the table” during contract negotiations if elected.

“I didn’t say that they don’t have a right to run, just that voters have a right to take that into account,” Cassidy said. “The idea of a conflict of interest is that a public official shouldn’t decide on an issue if you have a personal stake in the issue.”

In a recent letter written to The Other Paper, Cassidy argued that teachers represented by the teachers union “have a financial interest in the outcome of the South Burlington teacher negotiations.”

He said the union has a statewide collective bargaining negotiation strategy that involves citing the pay and benefits of neighboring districts as leverage for demanding higher teacher compensation.

“Such comparisons often drive fact-finding reports and settlements,” he wrote.

Cassidy pointed out that with just five board members total, if any members had to recuse from negotiations, the remaining board members could become overwhelmed.

He also noted that since board members spend about half of all their time in negotiations of teacher contracts, a recusal would relieve about half their responsibilities.

Cassidy said he understands the trouble boards have filling their slots, but that electing out-of-district teachers could create new complications.

“I think people deserve credit for running. It’s a hard job,” he said. “ … I’m not trying to be critical of them as individuals, I’m just trying to say you shouldn’t be involved in government where you have a personal interest.”

The candidates running against Williams and Samler are incumbents Elizabeth Fitzgerald, the current chair, and Bridget Burkhardt.

True North reached out to Williams and Samler for comment, but only Samler responded in time for publication.

“State law is clear that the only prohibition of teachers serving on school boards is if they seek a seat in the district where they work. And that makes perfect sense,” Samler told True North.

“That both seats in South Burlington are being contested by teachers from neighboring districts who live here is a testament to a fundamental issue: the current school board is falling short of doing the best it can for our students.”

Samler said putting educators on school boards is increasingly necessary due to the types of challenges schools and students face. He also said the current board “spends more time fighting with teachers rather than working with teachers to address the needs of our city’s children.”

According to Samler, there is a conflict of interest, but it involves “high-value property owners, many of whom come from a business background, making decisions that impact children.” He added that teachers “have a clear interest in what’s best for kids.”

“Richard Cassidy, who puts himself out there as a friend of labor, has consistently beaten up on teachers when he was board chair of South Burlington, and apparently he still wants to,” he said.

He said a conflict of interest arises only if the board member teaches in the same district as the board in question, which is already prohibited.

“Members who teach in one district and live in another and are running for their hometown school board, it’s not a conflict of interest,” he said. “This is a made-up issue by people who, frankly, are starting to sound like they are anti-teacher.”

Regarding the assertion that teachers cite what other districts are paying as a union negotiation strategy, Allen admitted it is standard practice, but added it does not amount to a conflict of interest.