Our political leaders had better be careful who we are listening to on the disappearance of Washington Post journalist Jamal Khashoggi who, on Oct. 2, 2018, entered the Saudi consulate in Istanbul to obtain a marriage license and has not been heard from since. With no evidence, other than that provided by Turkey, certain Senators — Lindsay Graham, Rand Paul and others — are willing to condemn the leader of Saudi Arabia as having arranged for the killing of the journalist. This same acceptance seems to be happening in the UK, Germany and other Western nations. 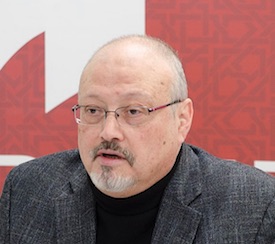 President Recep Tayyip Erdogan of Turkey, who claims that Khashoggi was brutally murdered and dismembered at the consulate, is no friend of Saudi Arabia, and his outrage at this crime is suspect considering his record of wrongfully imprisoning more journalists than any other nation. His expressed justification was that they were not journalists but were in fact terrorists. This is the same autocrat that has imprisoned American pastor, Andrew Brunson, for nearly two years without evidence for being a terrorist, and he was released only after pressure was put on Turkey by President Donald Trump.

The Saudis at first denied involvement but later said the journalist had been killed in a fight at the embassy, but there are many who do not believe that story is credible. The only thing that seems certain is that he is dead. The question that should come to mind is, how credible is it that such a wealthy nation as Saudi Arabia, even if they did desire to kill this person, would do it in such a sloppy and careless manner? Why would they kill him in their embassy, chop him up and dispose of him as suggested by Erdogan? Would it not make more sense that with such wealth and power they could have easily accomplished his disappearance somewhere where cameras would not record the comings and goings of the suppose culprits?

President Erdogan has also masterminded other human rights violations with falsehoods. It is unlikely that the truth will be known in this case if the world relies on him for it. Consider the above-mentioned imprisonment of pastor Brunson. Without cause or evidence, he was detained and languished for 63 days in a Turkish prison, sometimes in solitary confinement, without charges having been brought. The actual reason for his arrest was his Christian faith. When the pastor first came to Turkey 23 years ago, the secular military held sway on matters in that country. The military exercised their authority to guarantee the free exercise of religion and many other freedoms we in America enjoy because of our Constitution. Those freedoms no longer exist in Turkey. I was in Turkey in 1998 and experienced the openness surrounding my Christian faith, and in fact, had many Turks engage me in constructive conversation and curiosity about my beliefs. That would not be the case today.

Erdogan says he has evidence and recordings of what happened. He made the same kind of claims to imprison so many of his own military because of their pro-Western leanings and it turned out the evidence and recordings were knowingly phony and totally false. This disturbing situation in Turkey that occurred in 2012 resulted in the imprisonment of many pro-Western secular Turkish military officers that I earlier spoke of. One of those men was an admiral with whom I developed a very close friendship. He, along with 450 top military officers, were arrested and falsely charged with conspiracy to overthrow the Turkish Republic. Many of them had to endure three years of imprisonment before the truth won out and they were released. (Those desiring more information on this can research “Balyoz” and “Sledgehammer” cases.)

The Turkish military followed the teachings of Kemal Ataturk, the secular leader who in 1937 founded the Turkish Republic. The military did not favor any religion. Over the years they were responsible for the close ties Turkey had with the Western world and were especially close allies to the United States and Israel. At that point in history, the governing of Turkey was under dual authority with the weaker being the civilian leader, the then Prime Minister Erdogan, and the stronger being the secular military leadership. The latter held Erdogan in check then.

In 2000 the Islamists started to gain more popularity with the people due to improving economic conditions. Prime Minister Erdogan, with the aid and support of exiled Islamist Imam Fetullah Gulen (who self-exiled himself in 2000 when the military was taking a close look at him and who lives in a compound in Pennsylvania), decided to crack down on the military. Gulen owns 160 charter schools around the world including some in the United States. His power extended then across the seas with his control of the police and prosecutors. With doctored digital evidence they claimed that a conference in 2003 by the military was a planning of a military coup d’état. The digital recordings have been shown by many experts to be fake but the police and judiciary in Turkey, controlled by Gulen, convicted many of these military men. My admiral friend was imprisoned for three years of an 18-year sentence, before a court found that he and the others had been wronged. Even a United Nations “Working Group on Arbitrary Detention” had found that the human rights of these military men had been violated and Turkey’s actions were arbitrary.

It appears now that the two Islamists, President Erdogan and Imam Fetulah Gulen, are no longer allies and are contending for power as evidenced by a recent coup claim by Erdogan and the imprisonment of so many people, including more military and journalists. Erdogan also wants the US to extradite Gulen to Turkey to be tried in that case. While Turkey is a NATO nation, it is no real friend of the United States and we should be cautious in our dealings with them. With the power of the military now under the thumb of the President Erdogan, the information we gain from him should be suspect.

Many Western nations are relying on Turkey for the facts in the Khashoggi case, but it is imperative that we develop our own case with evidence that is not contrived and to do that we must not believe what Erdogan is saying without the proof required to convict someone of such a crime.

There are many in the United States who recently have decided that the presumption of innocence should no longer apply, especially in political matters as evidenced by the appointment of Brett Kavanaugh to the US Supreme Court. He was convicted in the minds of many without any supporting evidence of the claims made against him. Senator Patrick Leahy and Senator Bernie Sanders are now approaching the Khashoggi case in that same manner. Leahy, a former prosecutor, should know better.

One thought on “Orleck: What really happened to journalist Jamal Khashoggi?”