HARDWICK, Vt. — Four communities in the lower Northeast Kingdom are trying to adjust to a big reversal by Vermont’s education bureaucracy about recommended mergers under Act 46, the 2015 school governance law.

For years, former Secretary of Education Rebecca Holcombe told leaders of the Orleans Southwest Supervisory Union not to worry about Act 46. The towns represented in the union were expecting to be exempt from forced mergers because of their wide variety of school governance structures. 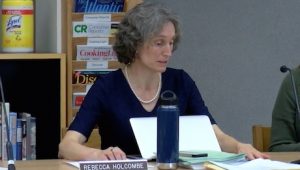 That all changed in October when the State Board of Education met to make final decisions on the remaining towns across Vermont that had not found a suitable way to merge in compliance with the law. The towns would, in fact, be forced to merge.

The schools that now must combine together include Woodbury Elementary School, Hardwick Elementary, Greensboro’s Lakeview Elementary and the school choice community of Stannard. All four communities send all or most of their students to Hazen Union High School, located in Hardwick. The merger, which will involve merging the budgets and boards together, is expected to be in place by summer 2019.

“We submitted an alternative district proposal to basically stay the way we were, to keep our current governance, and that was rejected,” she said. “Today it was made official that they are moving forward with the mergers.”

Under Act 46, towns that struggled to find suitable merger partners were instructed to draft an alternative district proposal that could meet the performance goals of the law without reaching 900 students target expected for a single school board and budget.

Language from the Board of Education’s final report indicates that while Holcombe had good reasons not to merge the local districts, they were not deal-breakers.

“The merger is, in fact, practicable because the obstacles and concerns described by the Secretary are not significant impediments to a merger and merger would achieve the goals of Act 46, as amended,” the final report states.

At the meeting, a top concern of attendees was the small schools grant. Woodbury and Lakeview had been receiving the grant, which amounts to between $40,000 and $100,000 a year, depending on the school. Woodbury was receiving around $70,000 per year, but with only around 50 students in the town, education officials have considered closing the area school.

However, by foregoing a voluntary merger process, as was the case for the supervisory union, the schools gave up their right to renew the grant.

Rep. Joseph “Chip” Troiano, D-Stannard, said at the meeting that he was less than optimistic about the money.

“What I learned today was that, without consolidation, the small schools grants will be eliminated from your small schools,” he said. “Geographic isolation is no longer a criteria [that warrants the grant].”

He went on to say that there will be a three-year phase-out of the grants. He also questioned the ability of schools like Lakeview to stay open.

“What does Lakeview do without that small school grant in three years, after 2020, when they are no longer protected by Act 46 and can be actually closed down by the State Board of Education?” Troiano asked.

The law does not allow for any school closures for the first two years after a merger. LeBlanc clarified that it’s up to the electorate to close schools, with in put from the State Board of Education.

“I’m really not understanding why this is being done now when there is no benefit to education, the taxpayer, or our towns,” she said. “I’m trying to figure that one out.”

“I think all of the boards are in agreement — this is something where we are all going to be working together,” she said. “It’s going to be ‘well, this is my school so we need to fix this.’ We all understand everybody has their feelings about their particular school that is in their town, and I think everybody is going to try to work together to do what’s best.”

The new district has 90 days to write its own terms for the merger. The new consolidated budget is expected to be ready possibly in April. Most school budgets in Vermont are finalized and warned by the end of January for Town Meeting Day in March.

The Lakeview School Board members are considering the option of an appeal of the state’s decision. A group called the Alliance of Vermont School Board Members is planning to challenge the state’s final merger decisions, and could announce that decision in the coming weeks.