“I’m not trying to get rid of the unions, but I am saying that they appear to be an antiquated concept in today’s economy.’’ – Jim DeMint

Early labor organizations in America were societies or craft guilds. They restricted entry to highly skilled workers. This caused few issues with employers since there were not many of them. But the Industrial Revolution quickly widened the gap between workers and employers. Workers viewed business as a threat to their wages and security. As industry grew, labor activists saw opportunities to grow in numbers. Organizers told gullible workers a union would be a “fraternity-like family”, not just another organization. They promised to protect their jobs and their sociopolitical interests, too. 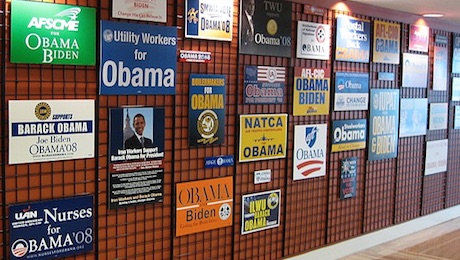 As seen on this wall, unions are strongly associated with Democratic Party politics.

Although unions have influenced better worker protections and safer workplaces, many of their tactics have led to social and political unrest. Their demands for more for doing less have been a burden on our economy. According to a recent Federal labor study, America has the bloodiest and most violent labor history of any free nation. Violence has ranged from individual acts, to organized campaigns of brutality to further union goals. Economists and sociologists agree; the marriage of politics and unions has produced negative results for industry and non-union American consumers.

Unions grew in power after the Civil War during the Industrial Revolution. But until the Depression, unions failed to organize less skilled workers in the steel, textile, and mining trades. This continued until FDR saw unions as a source to promote his leftist idealism. To gain their support, he created The National Industrial Recovery Act and the 1935 Wagner Act. Both gave unions the upper hand in collective bargaining over the interests of business. This was the first time a president openly got in bed with unions.

“It takes a long time to bring the past up to the present.” –Franklin Roosevelt

President Franklin D. Roosevelt created an unholy alliance between unions and Democrats that forever changed the face of American politics. The 1935 National Labor Relations Act was spearheaded by Robert Wagner, a progressive from New York. Now unions had a federal weapon to force unreasonable contracts down the throats of their employers. This put many businesses in financial jeopardy. The Congress of Industrial Organizations then organized mass-production workers. And for the first time in history unions broke tradition and backed Democrats in elections across America. This left businesses on the outside looking in, as labor soon assumed a seat at Roosevelt’s New Deal legislative table in D.C.

When FDR united the liberal left with unions, the interests of business and our economy has been a stepchild to labor. Since FDR left office, the left has chastised business as the enemy of unions and labor. Unions provide time, votes and money to Democrats, who reward them with policies that favor them over business. America is the only world democracy with an alliance of unions and a major political party that allows labor unions to dictate policy to government like U.S. unions do.

“The real bottom line is, the national unions want their hands on the money.” – Scott Walker

Since the end of WWII when union membership started to decline, the liberal left and unions have pontificated how important organized labor is to maintaining the health of our economy and quality of life for the working middle classes. Yet their steady decline in membership is painting a different picture. Unionized industries are becoming a smaller part of the overall work force each year, and they have a fraction of the influence they had a few decades ago. Only 12 percent of workers are union members. According to a recent federal labor report, it is down from 20 percent in 1983. In the private sector, the plunge has been even steeper: membership has dropped from 17 percent in 1983 to 7 percent.

Although there has been a rapid decline in union membership, the left continues to court the union vote. Since liberals need their support and their money to win elections, they make promises to unions they never keep. Unions continue to contribute every dollar in their treasuries to the left, which fails to run candidates that will benefit them. Even with today’s socialist left, whose plan is to lower the standard of living for everyone, unions give away the farm to socialist-democratic candidates?

“Beware of false knowledge; it is more dangerous than ignorance.” – George Bernard Shaw

Lord Acton said, “Power tends to corrupt,” and that has been the case of unions. They’ve become selfish, greedy and even thuggish in their quest to gain as much as they can for themselves at the expense of everyone else. Unions are no longer “brotherhoods” that “take care of those little guys,” they are the most rapacious special interest group in America today. Last year when the Supreme Court ruled in Janus v. AFSCME that non-union workers can’t be required to pay union dues as a condition of working, this landmark case freed 5 million American workers from union bondage.

In the aftermath of a major strike wave in 1945 and 1946 that threatened our war effort, Congress passed the 1947 federal Taft–Hartley Act. It prohibited unions from engaging in unfair labor tactics, including wildcat strikes, political strikes and secondary boycotts, mass picketing of closed shops, and donations by unions to federal political campaigns. It also allowed states to pass right-to-work laws, and required unions to sign non-communist affidavits with the government. States eager to avenge the damage done to their economies by unions before and during the war began passing right-to-work laws.

“Right to work means more work for everyone.” – Dave Portnoy

Today, 27 states have right-to-work laws and many have proposed them as they watch businesses flock to right-to-work states. When Nissan opened a non-union plant in Mississippi, the UAW went after them with a vengeance. But after a 12-year fight to unionize them, workers voted 2,244-1,307 against unionization. Nissan had brought well-paying jobs to those that needed them. Although Nissan workers make less per hour than those in northern plants, they work full time and make the highest blue-collar wages in the state. They also have the same benefits as most UAW workers.

The current GM strike proves union ignorance is bliss. They obviously didn’t learn a thing from their bankruptcy when the taxpayers bailed them out. The union is demanding huge cost-of-living raises although GM paid the average worker a $14,000 profit-sharing bonus last year. The union wants the Lordstown, Ohio, plant reopened, although there’s no demand to use it. They’ve proposed new rules that reduce productivity and increase costs. Has Jimmy Haffa secretly risen from the dead?

Donald Trump has turned the heads of blue collar America from unions as they saw their wages dramatically increase during the last three years. Yet union bosses remain steadfast Democrats although many members disagree with unions’ politics. Union leaders for the Teamsters and other unions concede there’s enough support for Trump within their ranks to complicate their presidential endorsement for the next election. Yet no major union so far has backed Trump’s re-election bid?

“We’ve had great support from union workers, and I support them. But I also love the right to work. A lot of people don’t realize how much they are paying in fees to unions. Right to work gives great flexibility to the people and to our companies. People deserve a choice!” – President Donald Trump

2 thoughts on “Opinion: Why states are just saying no to unions”