I am appalled at all the reasons folks find to protest about something. It seems to be the “thing to do.” Do we not have something better to do with our time? Where is all the anger and angst coming from? Can we be productive and not destructive with our time and energy?

So news casts had all the fresh news of what is terribly wrong with the world. Colin Kaepernick is upset with Nike because of a shoe decoration he doesn’t like. Mobs of protesters are showing their anger all over the country about what is happening at the border. Additionally, I have noted an increase in protests and hate issues recently. What is going on that is so bad? 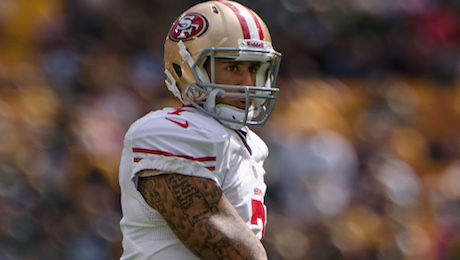 Apparently Colin Kaepernick is sponsored by Nike for a large amount of money. None of the articles I looked up could be quite sure how much, but they all know it is a lot. So Nike decided to decorate a new sneaker with a Betsy Ross flag. Mr. Kaepernick protested because the flag was made during the time of slavery. Nike is losing more money by pulling all the shoes from the market. Oh, and Kaepernick no longer plays in the NFL.

So I looked up the biography of this terrible person, Betsy Ross. She was raised as a Quaker and continued that religion the rest of her life. Her first husband was an upholsterer and she continued in the business until the 1820s. They lived in New Jersey. It is not certain that Betsy Ross actually designed the flag but she did make flags as part of her business. So Mr. Kaepernick’s reaction is not appropriate in my mind. Could it be just another way to get in the news again?

So now the border issues protests. Have any of these hundreds of people who are protesting actually been to the border to actually see the conditions and what is really going on? Do they remember that these illegal aliens are breaking the law? I understand that the drug cartels are taking advantage of the situation to send huge amounts of lethal, illegal drugs to their markets which will undoubtedly kill many Americans. Do they believe that the children who are brought across the border by the drug dealers aren’t being pawns of these dealers?

What about the Immigration officials who are working under extreme conditions? I believe they are doing the best that they can in these horrid conditions. This is a horrendous situation and deserves our support, not our hate. If the protesters think that these officials are not doing enough, wouldn’t it be better if they decided to help not hinder the situation?

There are specific laws about people coming to the United States. You should not be able to walk or swim across the border and not be breaking the laws of this land. Are we sure we want waves of law breakers swarming into to our country and using our resources? Why are these people deciding to start walking across borders and arduous territory? Why are they assuming that it will be nirvana in America? What are they being told and by whom?

The bottom line is that these thousands of people are breaking the law by coming here without following the legal procedures. The protesters need to understand that simple fact.

16 thoughts on “Opinion: Why all the protest?”