By Lora Ries and Zack Smith | The Daily Signal

Unfortunately, history is repeating itself. Last summer, many of us watched in horror as rioting and looting took place in cities across the country.

We saw police in Seattle abandon one of their precincts to a mob. We saw looters shoot dead a retired police officer trying to protect his friend’s store. And we saw nightly attacks on federal buildings in Portland, Oregon—among other disturbing scenes.

And, sadly, we saw similar scenes playing themselves out again just recently, with the violence seeming to occur so frequently that it’s difficult to keep up.

In Portland, where Antifa has rioted almost nightly for nearly a year, the mob set fire to the Immigration and Customs Enforcement building Sunday night with agents inside. 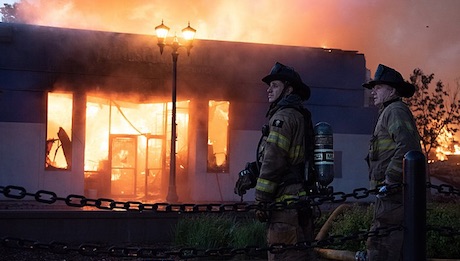 Firefighters in front of a burning building observing damage in Minneapolis the afternoon of May 28 2020 in the riots after the death of George Floyd.

Why has this lawlessness been permitted to continue for nearly a year?

It’s largely a rhetorical question because the answers are obvious. These Antifa-inspired mobs have been permitted to repeatedly attack federal buildings, destroy local businesses, and assault law enforcement officers for the past year because politicians sympathize with Antifa and support its cause.

And so many members of the mob have not been prosecuted “in the interest of justice.” Instead, they’ve been released to continue rioting night after night. What other result could there be? This permissiveness begets more lawlessness as the violence spreads and escalates.

Police pulled over Wright for driving with expired tags and found during the course of the stop that he had an outstanding warrant because, as The Associated Press reported, he had failed to appear in court after he had “fled from officers and possessed a gun without a permit during an encounter with Minneapolis police in June.”

Because of the outstanding warrant, officers began to place him under arrest, at which point he resisted arrest and attempted to flee.

In a tragic turn of events, it appears that an officer who meant to tase him instead drew her firearm and fatally shot him. She has since resigned and been criminally charged.

But apparently that’s not enough. Even though President Joe Biden said there is no justification for looting or violence, groups bent on violence didn’t listen because they announced more protests and riots in a dozen other cities and delivered more violence.

In Minnesota, tension was already building only miles away, where the murder trial of former Minneapolis police officer Derek Chauvin for the death of George Floyd continues. Minneapolis was preparing for riots no matter the outcome of the Chauvin trial. Now more riots seem a foregone conclusion.

Rioting and looting have become regular responses to police incidents or, in the case of Portland, for no apparent reason at all. That cannot become the “new normal.”

If Biden is sincere about wanting to end the destructive violence, he will need to do much more than give simple lip service to it.

He and Vice President Kamala Harris need to give clear, public, and frequent direction to state and local leaders, prosecutors, members of Congress, and the media that all violence—no matter who commits it—is condemned.

And they need to emphasize that for those convicted and found guilty of a crime, severe consequences under the law will be imposed. Otherwise, nothing will change.

Meanwhile, law enforcement officers continue to do their tough, dangerous jobs even as criminals and rioters continue to target them for injury or death.

Two weeks ago, a Nation of Islam follower rammed his car into a U.S. Capitol barrier and used a knife to kill one Capitol police officer and injure another.

The pictures of Officer Billy Evans’ widow and children attending his service in the Capitol Rotunda should remind us all of the difficulties and dangers law enforcement officers—and their families—must confront on a daily basis.

Some of the policies being pushed right now, such as the George Floyd Justice in Policing Act, give rise to concerns of people in cities across the country experiencing the “Ferguson Effect” on steroids. Understandably, police are retiring and resigning in large numbers.

This is aggravated by continuous calls to defund the police and knee-jerk reactions to blame police officers whenever a police-civilian interaction goes awry without first getting the facts about what actually happened.

And surely, statements by some on the left, such as those by Rep. Rashida Tlaib, D-Mich., painting police officers as racist don’t help matters.

Law and order benefits all parts of society. The security that stems from law and order is the foundation for economic opportunity.

If Biden and Harris truly want peaceful and thriving communities, they need to stand up to the leftist mob, return to supporting law enforcement, publicly condemn all violence, and encourage prosecutors to punish such violence, no matter who the perpetrator happens to be.

The continuation of the left’s selective outrage, punishment, and division based on race and political agenda will only further divide this country. If it really wants unity for this nation, it’s beyond time to walk the talk.

Originally published by The National Interest

4 thoughts on “Opinion: The death of law and order is destroying America”