A group representing 121 “investors” has filed a lawsuit claiming that state officials in Vermont knew the project at a Vermont Ski Resort was a Ponzi scheme but did nothing to stop it.

If you missed it, back in early 2016 we reported on the funneling of millions of dollars, laundered through the feds, to “projects” in Newport, Vermont.

From 2014 through 2015, over $17 million was awarded by the FAA and DOT to remodel the airport serving the tiny town and the 4,600 residents. It caught our attention (see Les Otten and the Balsams Boondoggle), introducing us to Bill Stenger and Ariel Quiros. 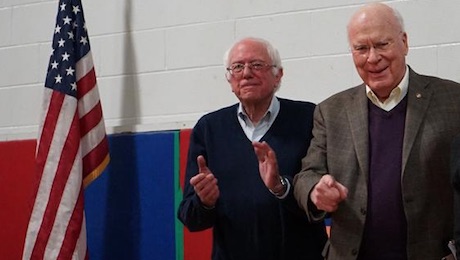 They used the EB-5 Visa program to get investment money for their projects from foreign investors.

A ski resort expansion (mismanaged by Jay Peak and QBurke), among others, explains the airport expansion because you can’t have a successful resort if people can’t land planes nearby to take advantage. Newport is on the Canadian border, a drive from just about everywhere.

I’m sure that’s how they sold it. That’s how Senators Sanders (I) and Leahy (D), and Congressman Welch sold it. Expansions “that will bring people for business, tourist and recreation opportunities throughout the region.”

They were very excited to announce all those funds secured for the runway and then a taxiway expansion to this local airfield.

Leahy also personally complained to a Senate Committee about delays with the EB-5 program (being used to support the Ponzi scheme).

Vermont developers have used EB-5 funding at several large, tourist-related development projects, including at Jay Peak and Burke Mountain, in Stowe and at Sugarbush, Okemo and Mount Snow. Because of a backlog in processing and increased oversight by federal regulators, including the SEC and USCIS (immigration), application approvals have slowed and projects have stalled.

If foreigners gave money (500,000) to so-called investment opportunities, the U.S. would offer them a green card for permanent residence in the country.

Both Stenger and Quiros (mostly Quiros) have pleaded guilty to various charges stemming from an FBI investigation into their fraud (over the AnC biotech facility project in Newport). Most of the money has been recovered. But the Vermont political machines that eagerly aided and abetted the fraudsters haven’t suffered much, if any.

The lawsuit is directed at them, and it should start with these folks from our 2016 Report.

Newport, Vermont resident Bill Stenger has his fingers in all these pies, and like any good “developer” has invested his fair share of dollars on the local crop of politicians. He gave $4000.00 to the campaign of the current governor, Peter Shumlin, and his resort project, Jay Peak, shows a $2000.00 donation to Shumlin in 2012.

Ariel Quiros gave $2000.00 directly to Shumlin, $14,000.00 to the VT Democrat Party, and another $12,000.00 to the Vermont State Democrat Federal Campaign Committee- which funnels donations to support the campaigns of Vermont’s…Senators and Congresspersons.

And according to this report, the same Jay Peak developers have donated a total of least 71,900.00 dollars to Vermont Democrats since 2011.

Developers grease wheels. A few of them, Leahy among them, promoted the program that at least briefly helped hide a Ponzi scheme. Will any of them get named or pay some price? I have not found the actual lawsuit yet, but I doubt anyone of political stature is shaking in their boots or even named in the suit.

But a guy can dream, can’t he? I’ll follow up once I have a copy of the suit.

10 thoughts on “Opinion: Sanders and Leahy should be named in Vermont’s latest EB-5 Ponzi scheme lawsuit”