Truth be told, capitalism has helped cleanse our planet—improving living standards while protecting the environment. Rather than eliminate capitalism, policymakers need to unleash it.

Markets incentivize efficiency by rewarding people for coming up with ways to do more or do better with less. People choose—and businesses make—more efficient products because it saves them money while delivering what customers want. 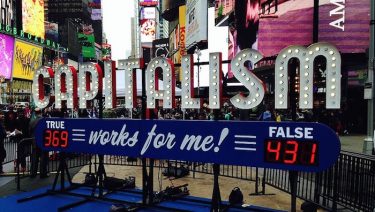 Over the past decade, market forces have driven a massive transition within the energy industry. In 2008, coal provided roughly half of the country’s electricity generation. Now, coal’s share is about a quarter. Increased production of natural gas has driven energy bills and emissions downward.

The energy industry is far from the only sector that has made positive economic and environmental contributions. For instance, the cement industry is collaborating with the Massachusetts Institute of Technology to explore how to refine its processes in ways that will improve resiliency, reduce emissions, and save lives. Investments in cement, steel, plastic, and other building materials will make our houses and highways sturdier and our products more durable—with a smaller environmental footprint.

All of these activities result directly from free enterprise — companies providing consumers with the goods and services they want while using fewer resources and emitting fewer unwanted emissions.

As a country prospers, its citizens are better able to care for the environment and reduce pollutants emitted from industrial growth. In fact, The Heritage Foundation’s Index of Economic Freedom and Yale University’s Environmental Performance Index show a strong correlation between a country’s environmental performance and economic freedom (i.e., its embrace of capitalism).

The bigger problem, typically, is that Washington can’t keep up. Policy and regulations significantly lag behind the pace of innovation, market trends, and consumer preferences. Thus, government ends up retarding economic and environmental progress.

A significant obstacle to investment in producing or switching to cleaner energy sources is the lack of infrastructure needed to deliver the energy to would-be customers. Natural gas offers a cheaper, cleaner alternative to home heating oil; however, pipeline capacity is lacking in America’s Northeast. Of the 5.7 million American households still relying on oil heat, 85% are in the Northeast, where nimbyism and opposition to any carbon-based fuel run strong.

The obstructionism isn’t limited to conventional fuels, either. Efficiently siting and permitting new transmission lines could expand the consumption of renewable power from, say, Canada, which enjoys a surplus of hydroelectric power. Additional infrastructure would also allow energy-intensive manufacturing processes, like the cement industry, to switch to cleaner, cheaper fuel.

Another sound policy would be to make immediate expensing a permanent fixture of the tax code. This would allow newer equipment to come online faster, improving energy efficiency and the overall economy. The current system of depreciation raises the cost of capital and discourages companies from hiring more workers and increasing wages for existing employees.

Too often, we use phrases like “balancing economic growth and environmental protections.” This suggests that more growth necessarily degrades the environment. But the two aren’t mutually exclusive.

When America and the rest of the world embrace policies rooted in economic freedom, both prosperity and the environment flourish. In this instance, you really can have your cake and eat it, too.

This article was originally published in The Washington Times.

One thought on “Opinion: Capitalism helps protect the environment”