Since Donald Trump took office, the rise of cancel culture, the banning of someone from society, emerged as the leftist tool to silence everyone who supported the president and the GOP. With the help of the media, they conspired to ban Trump from politics. They made generic accusations that couldn’t be proven or defended to discredit Trump and his supporters. It was not good enough to end Trump’s career. They had to destroy his character and that of everyone who supported him.

Cancel culture became the weapon of mass destruction by the left to quench their thirst to banish a popular leader, to shame his supporters, and discredit everyone who refused to buy into socialism. They rewrote history to engender race and ethnicity to portray our founders as racists. Members of the GOP and their party members who didn’t ascribe to their credo, recite their rituals, or support their anti-American socialist causes were assaulted, silenced, blacklisted and finally canceled out.

Cancel culture on social sites and in the liberal media morphed from a leftist journalist rallying cry against Trump into everyday public discourse. Morning Consult fielded a study on media cancel culture and found the majority of political moderates said they no longer trusted traditional print media.

Trump cancel culture grew rapidly on social media and on political forums into a “group shaming.” Numbers from a recent Emory poll revealed that 76% of all Americans believe cancel culture “has gone way too far.” Another 39% of Americans admit they have tuned out social media and do not listen to national news networks. Only 9% felt it was effective and 16% had no opinion either way. 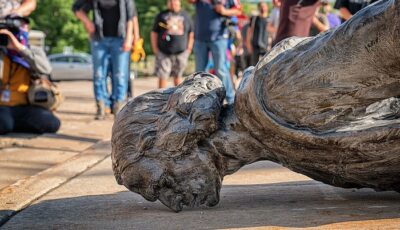 Cancel culture became the weapon of mass destruction by the left to quench their thirst to banish a popular leader, to shame his supporters, and discredit everyone who refused to buy into socialism. They rewrote history to engender race and ethnicity to portray our founders as racists.

Pollsters found that age is the most reliable criteria to predict political views. “Post-Millennials” or Generation Z and Millennials are most aggressive punishing people or institutions for their views. Generation X and Baby Boomers have the strongest distaste towards it. Cancel culture is driven by the young, who are easily influenced by social media, traditional news, their friends and celebrities.

Millennial journalist Ernest Owens wrote, “Old, powerful people often seem to be more upset by online criticism than they are by injustice. They deny overt prejudice exists across America and white conservatives promote racism daily.” But evidence by recent pollsters tells a different story.

Over half of voters 18-34, 55%, admitted they have taken part in cancel culture and will continue to do so. Yet less than a third of the voters 60 or older, 11%, that identify as moderates claimed they rarely ganged up with social media groups to cancel someone out. And 40% said they never did.

The day after Donald Trump won the election in 2016, the media intersected cancel culture into its regular debates and in the middle of discussions about race and diversity and how detrimental the Trump presidency would be for American equality. This spieled out of newsrooms and onto social media forums. This continued daily on TV news shows and in national newspapers for four years.

Conservative cancel culture got so out of control, The New York Times, America’s most far leftist newspaper, demoted editorial page editor James Bennet after other Times writers punished him for publishing an op-ed from Sen. Tom Cotton supporting the use of military to quell violent protests. One editor, Bari Weiss, resigned claiming the paper had betrayed its duty to report the news fairly. “My forays into ‘Wrongthink’ made me the subject of continual bullying by colleagues. Twitter is their new editor.”

Vowing to cancel out Donald Trump, we witnessed a marathonian rage against everyone who did not buy into leftist hateism. Anyone who did not purchase a Black Lives Matter T-shirt from Target or said “All lives matter” was branded a racist. Anyone who did not condone violent Antifa and BLM protests were labeled radical right wing racists and canceled out on social media and in the press.

During the Obama years, the left was spoiled by the media who worshiped Obama. They covered his mistakes in the court of public opinion. They blamed the GOP for his disdain for bipartisanship. The marriage of media and the left silenced all truths about his inept foreign policy and domestic affairs. They canceled out everyone who dared to criticize his political failures and his catastrophic mistakes like Benghazi. They turned a loser into a hero by canceling out conservative free speech.

On July 4th at Mount Rushmore, Donald Trump said, “We need open debate, not speech codes or cancel culture. We embrace tolerance, not prejudice. The liberal weapon of cancel culture is to drive people from their jobs, shame dissenters, and demand submission from all who disagree. That is totalitarianism, and completely alien to American culture and values. We won’t tolerate it.”

The response from the media was bizarre, absurd and flat out denial. Comments on leftist social media, from liberal elites and the media attacked everything Trump said. They barked that cancel culture is a myth. There is no culture war against America today, its past, its founders or their moral values. The NY Times retorted, “This is a right-wing lie to discredit the media and The Democratic Party.”

The election of Donald Trump led to total disintegration of American political and media standards. Those who queried the left’s bogus FBI and DOJ claims in 2016 were canceled out as conspiracy theorists. The media was a willing scribe for Democrats and peddles of untrue tidings from evasive sources to discredit Trump. When he exposed them as liars, they countered with more lies.

Karl Marx said, “Seeding of lies grows false truths.” The left and the media targeted anyone who did not agree with them. They silenced all who opposed the left. They sent GOP supporters a message: if you express your views you will be canceled out. While Trump was in office, leftist cancel culture tactics hurt innocent people, stopped public discourse, and totally destroyed all media credibility.

Although media tried to cancel him out daily, Trump’s domestic and foreign policies were the best in U.S. history. He had record low unemployment; cut taxes and improved the lives of all Americans for four years. America will only realize his greatness after he is gone and they lose all they gained, as they watch the left take everything away and replace it with liberty-killing socialism.

When Plato asked Socrates how to judge justice in a republic, Socrates replied, “In a good city justice is debated. If we cease public discourse, we cease having justice in the city. For justice to exist in the republic, and for it to maintain public justice, the public must debate what is good and bad in the republic. A republic must know what they are doing wrong and doing right to survive. ”