RUTLAND — The disastrous 2018 election results for conservative Republicans and like-minded candidates has ignited a grassroots effort to strengthen the base and field new candidates for local and statewide office.

While bringing conservative and libertarian voters together may sound a bit like herding cats, the stinging GOP defeat has created a new willingness among some members of these political groups to find a way forward. 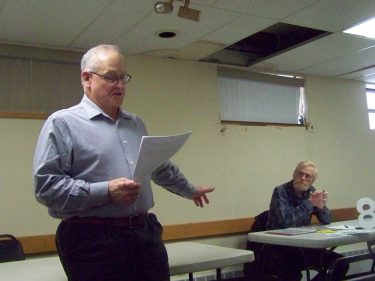 John de Bruin:“802VT Alliance has taken on the responsibility to ensure that conservative Republican or independent candidates meet certain criteria in order to be endorsed for political support.” Pictured: deBruin, right, and Terry Williams.

When John de Bruin, a resident of Danby, founded 802VT Alliance on Facebook in mid-2018, he didn’t envision his movement of online grassroots activists ever moving out of cyberspace and into the Vermont countryside.

But on Jan. 27, he hosted the first in-person meeting of the 802VT Alliance at the Rutland American Legion on Washington Street in Rutland City. At the meeting he welcomed 30 “community organizers” to take the group’s message into towns across the state.

While the kick-off meeting had some of the markings of a new Vermont political party, de Bruin said the aim of the group is to restore constitutional control at all levels of government and not to form another party.

“As a group,” de Bruin said, “802VT Alliance has taken on the responsibility to ensure that conservative Republican or independent candidates meet certain criteria in order to be endorsed for political support.”

He said that the alliance bases its support of candidates on voting records, for an incumbent, or political platforms, for first-time candidates. The initial objective of the group to influence the state election, according de Bruin, began last summer, before the Republican Party primary. He added that that the focus now must widen to include local candidates running for various offices down to the town level.

“In addition to endorsing candidates, we want to unite like-minded voters behind the most viable candidates supporting liberty, free enterprise, free markets and personal responsibility,” he said. 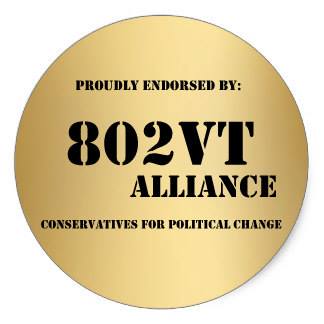 During last year’s campaign, the alliance endorsed its favored candidates with a medallion crest or “seal of political approval,” which could then be used with campaign advertising, brochures and social media pages. De Bruin wants to build the brand so the group’s imprimatur will mean something to candidates and voters supporting the group’s principles.

De Bruin started the first meeting with the “pledge of alliance” and then launched into an explanation why the alliance is needed and how it will play a greater, more aggressive role in Vermont politics in the coming months.

“There are 182 very important offices in this state,” de Bruin said to his audience. “The sad part of that fact is that 175 of those posts are now filled with Democrat or Progressive candidates. Only seven of those posts are held by Republicans at this time. Is this fair and balanced government?”

Attendees responded with vigorous shouts of “no!”

“Our current governor, the quasi-Republican, is only a figurehead,” de Bruin continued. “His political hands are tied and his office has lost all power. … We warned you that this would happen if you didn’t vote the down-ticket candidates, but tens of thousands of Vermonters decided not to vote. That to me was a travesty.”

On its Facebook page, 802VT Alliance endorsed many limited-government-minded candidates in 2018. However, few succeeded with the low turnout among conservative Vermonters.

“It was a huge mistake for the state GOP to put most of its money behind Phil Scott and we all know it,” deBruin said, adding that he was disappointed that the issue of gun control and S.55 didn’t lead to a stronger showing at the polls.

Three 2018 candidates who ran unsuccessfully were at the meeting to share their experiences and address the group of activists: U.S. Army veteran Terry Williams, a conservative Republican who ran for state senate in Rutland County; Archie Flowers, a Libertarian who ran for state senate in Addison County; and Republican U.S. Senate candidate Lawrence Zupan, who challenged Bernie Sanders.

Also in attendance was Keith Stern, who unsuccessfully challenged Scott for governor in the Republican primary. He took part in some of the floor discussions at the meeting.

“We need the people to pull together and have one common cause and come up with a strategic plan,” Williams said. “My hat goes off to John for spearheading this. … He has given us a start [and] we need to help ourselves out of this mess.”

Williams reported that he and a colleague counted 13 conservative and liberty-minded splinter groups in Vermont which, he calculated, include as many as 10,000 voters.

“They’re spinning off into different directions — we need to get everyone pulling in the same direction,” Williams said. “So we need leaders to step up and lead.

“We don’t need all these groups distracting from our (main) effort. Facebook groups all have a common cause and we need to get together. This group may be the vehicle. We need to get people out to vote next time, big time.”

Williams said that he has three children living in Vermont and he’d like to see them get more involved in conservative politics, implying that mostly liberal-minded youth are engaged currently in the “political marketplace.”

“The progressives must hope that we either die or go away, but I’ve never strayed from a fight. I think this is worth undertaking,” he said.

“On a state level, back during the mess with S.55, I examined what the Vermont oath of office actually meant; they take the oath under pain of perjury [and] perjury carries prison time,” he said. “I talked with lawyers … [about] how do we hold state legislators and the governor to their oath of office. They serve us, not the other way around. They are legally accountable to us.”

Attendees at the gathering expressed concern over increasing gun control as well as conflicts of interest with the Vermont Attorney General’s Office.

“He’s not upholding the law,” one member said regarding the attorney general.

Another attendee said that the group should not endorse impeachments at the state level, suggesting that the process is too rare and unusual.

When the discussion turned to the poor performance of “R” candidates, Terry Williams suggested, tongue-in-cheek, that conservative candidates might consider running as Democrats as a way to capture ideologically sympathetic Vermont voters who will only vote for candidates with a “D” after their names.

Activist Bruce Busa, an independent 2018 U.S. Senate candidate from Readsboro, added that he and other citizens are angry that voters in Chittenden County have unfair advantages over most Vermont voters — namely, they get to vote for more state senators than in other districts. Busa noted that his plan is to draft a petition for next year’s Town Meeting Day to address this perceived political injustice. He hopes others will bring the same concern to their town citizens in 2020.

Lawrence Zupan, who ran against Sanders last year, was the meeting’s final speaker.

He included an assembly prayer and recited an appeal for prayer by Benjamin Franklin at the Constitutional Convention of 1787. Zupan also touched on several issues facing the state such as gun control, Act 250 and abortion, among others. He also expressed concern over the national drift away from strict interpretation of the U.S. Constitution as the Founders intended.

Concluding with a call for volunteers to sign-up for various VT802 Alliance organizational positions, attendees were charged with reaching out to their local communities to spread the “natural rights” and Constitutional principles of the group. They also encouraged everyone, of course, to stay connected on the group’s Facebook page.