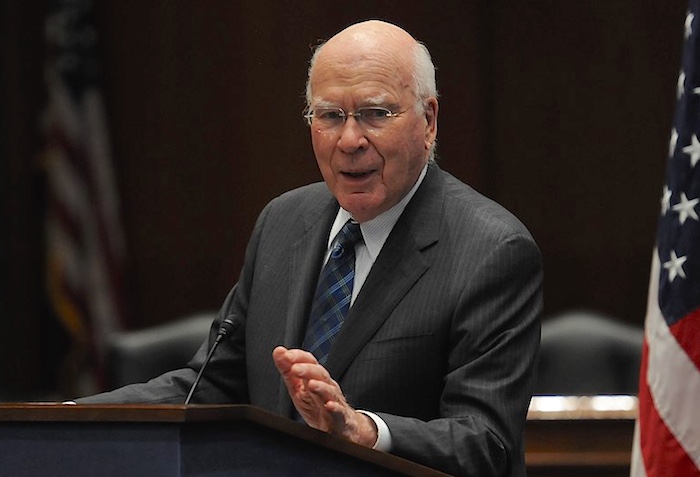 U.S. Senate President Pro Tempore Patrick Leahy, D-Vt., was sworn in Tuesday to be the presiding officer in the impeachment trial of former President Donald Trump, despite saying weeks ago that Trump is guilty of inciting violence at the U.S. Capitol on Jan. 6.

“President Trump has not simply failed to uphold his oath to preserve, protect, and defend the Constitution, which itself would be sufficient to warrant his impeachment and removal; he has emerged as the greatest threat to the Constitution and to American democracy in a generation,” Leahy said in a statement earlier this month.

The Vermont senator, who hasn’t denounced BLM and antifa riots, characterized the forced entry into the Capitol building as “domestic terrorism” and attempted to tie it to Trump.

“Uniting our country happens not through rushing to forgive and forget an act of domestic terrorism. It happens through utilizing the constitutional powers granted to us by the Founders to protect our democracy. We must act together now not just to hold President Trump accountable, but to ensure that no future president, no matter their party, places at risk our democracy in service of their own selfish, illegal, and authoritarian ambitions,” he said.

Such statements ensure that the president is not headed for a fair and impartial trial when the impeachment hearings begin in the U.S. Senate on Feb. 9.

“If the pending impeachment trial of former President Donald Trump was going to be viewed as anything but a partisan attack on a political enemy, the chance went out the window Monday with the announcement that one of Trump’s most vocal critics in the upper chamber is going to be the man running Trump’s show trial,” wrote Joe Saunders for The Western Journal.

On Jan. 6, hundreds of thousands of Trump supporters peacefully gathered in Washington, D.C., for the “Save America” rally. A few hundred vandals, however, stormed the Capitol building and committed acts of violence, leaving a significant stain on an otherwise peaceful demonstration.

Leahy supports the impeachment trial — designed to remove Trump from office — even though Trump is already out of office, and a private citizen.

“We can do it even after Trump leaves and it could be done in a way that he would not be able to hold office again,” Leahy said early in the month.

Nonetheless, this week Leahy said he is the right referee to preside over the trial.

“When I preside over the impeachment trial of former President Donald Trump, I will not waiver from my constitutional and sworn obligations to administer the trial with fairness, in accordance with the Constitution and the laws,” Leahy said in a statement.