The Becket Fund for Religious Liberty, a leading nonprofit law firm defending religious freedom, is taking an innovative approach to evaluate the current state of religious freedom in America.

Most assessments in this area focus on government actions such as laws, regulations, or court decisions that affect religious freedom. Becket’s first-ever Religious Freedom Index instead focuses on public opinion, using a national poll to examine six dimensions of religious freedom. The results are generally positive, with a few caveats.

At least formally, religious freedom in America long has been defined broadly. The First Amendment, for example, refers to the “free exercise of religion,” which obviously extends beyond speech or religious worship. In fact, colonial laws protected the exercise of religion for more than a century before the United States was born. 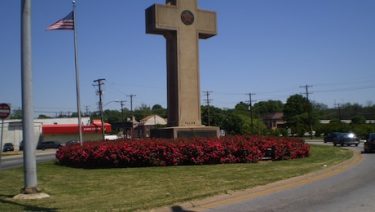 The Bladensburg World War I Memorial, often called the “Peace Cross,” is located in Bladensburg, Maryland. It has been the subject of fierce opposition from atheist groups.

In the mid-20th century, following World War II, the U.S. was an original supporter of the Universal Declaration of Human Rights. Article 18 of that document says that religious freedom includes both belief and behavior, in private and in public, individually and collectively.

But rights, even such fundamental and comprehensive ones, are more than statements or ideas. To be real, they must be experienced and that, in turn, depends a great deal on people’s understanding, perception, support, or opposition to religious freedom. This is why, for example, the Pew Research Center’s evaluation of religious freedom around the world looks at social, as well as government, hostilities involving religion.

Becket’s Religious Freedom Index asked about the degree of acceptance/support or challenge/opposition to six dimensions of religious freedom.

Although there was little difference between Democrats and Republicans regarding religious pluralism, the largest gap was about the freedom to practice one’s religious beliefs “even if they are contrary to accepted majority practices.”

Significantly, however, Democrats led Republicans by 10 points (85% to 75%). Future indexes will show whether this continues as the category of “accepted majority practices” changes over time.

The Religious Freedom Index also explored “how Americans value religion and its role in society.” The results were not as encouraging.

“When it comes to issues and what happens today in our country,” for example, 56% said that religion is “part of the solution” while 44% said it is “part of the problem.” The division about “people of faith” was 59% to 41%.

Problems, of course, need solutions. This perception by many (thankfully, not a majority) that not only religion in general, but people of faith in particular, are part of the problem may weaken support for the freedom to practice one’s religious beliefs even when those beliefs are contrary to majority practices.

The index also examined the familiar area of church and state. Here, even though the U.S. Constitution explicitly prohibits any “religious test for public office,” one-quarter of Americans say that candidates “should be disqualified or blocked from holding public offices” based on their religious beliefs.

They also say that “[s]ociety should not tolerate public officials who might allow their religious beliefs to influence their decisions.” It will surprise many that the percent of religious people who say they believe this is exactly the same as the percent of agnostics and atheists.

The Religious Freedom Index is based on an online poll surveying a representative sample of 1,000 Americans age 18 and older. The margin of error was plus or minus 3.1%, and Heart and Mind Strategies constructed the index.

Becket’s conclusion from this first Religious Freedom Index is that “there is evidence for broad support of robust religious freedom protections, discomfort with government interfering in religious practice, and positive attitudes toward a culture of accommodation of religious practice.”

The caveat, however, is this: “Within each dimension the composition of support and opposition varies depending on political parties, age, ethnicity and many other factors.”

This means that the consensus supporting religious freedom in America might be broad, but it also may not be very deep.