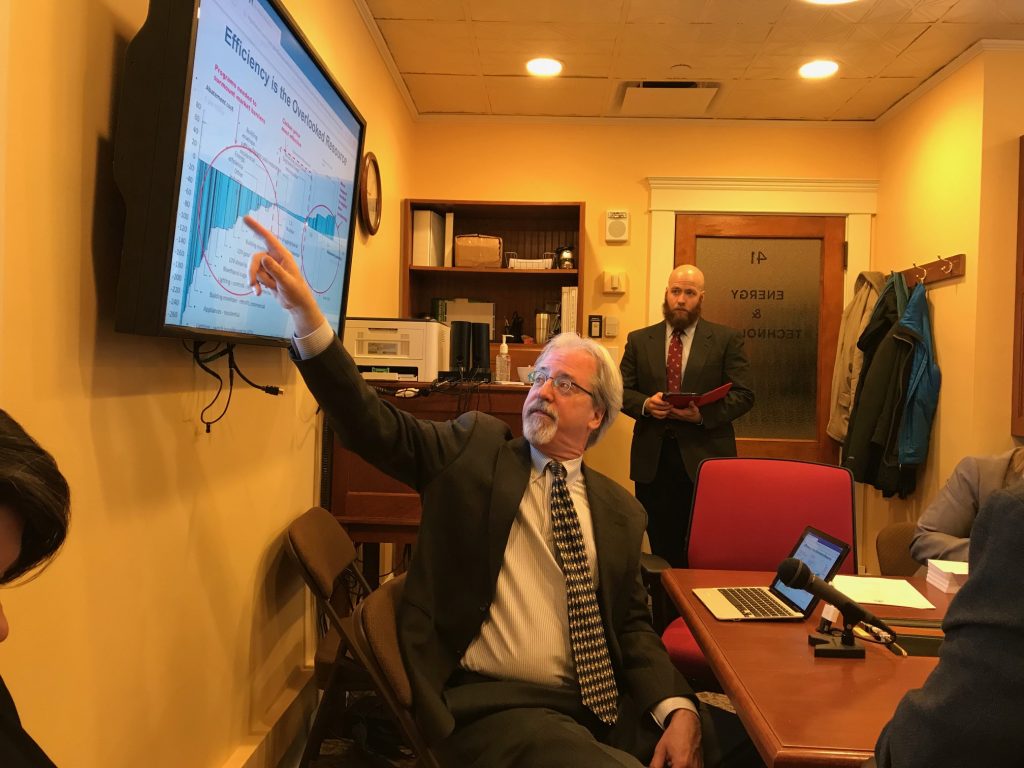 COMES AT A COST: Rick Weston, principal and director of policy for The Regulatory Assistance Project, speaks to the House Energy and Technology Committee on Tuesday, March 12, 2019.

MONTPELIER — The director of policy for The Regulatory Assistance Project on Tuesday told the House Energy and Technology Committee that any carbon mitigation programs are going to come with a big cost to taxpayers.

In a discussion over non-pricing approaches to reducing carbon emissions in Vermont, committee members heard from Rick Weston, the principal and policy director for The Regulatory Assistance Project. The goal for the state is to get to an 80 percent reduction in carbon emissions by 2050.

“One thing we’ve learned in Vermont and around the world is that the cheapest thing that we can do to save energy, to avoid emissions and to save money, is to invest in increased energy efficiency. We’ve been extremely successful with that around the world and here in this state,” Weston said.

None of the measures discussed include the carbon tax, which has become politically unpopular even for the green-conscious state of Vermont. Weston noted the Western Climate Initiative projects carbon pricing plans amount to the least carbon mitigation per cost to society, because the added cost doesn’t seem to significantly impact people’s day-to-day energy habits.

By comparison, the cost per ton of avoided carbon resulting from increased electric vehicle (EV) incentives amounts to just $16 per ton. He said the cost of carbon avoided per ton via weatherization of homes is actually a $142 benefit due to long-term energy savings.

That’s not to say there are not substantial costs associated with non-carbon pricing methods. Five initiatives were examined which would lower emissions via weatherization and heating programs. If all five were enacted, over 10 years the total cost would be $600 million.

“The average cost per year if you were to run all five of these programs is $60 million per year,” Weston told the committee.

That figure does not include the cost for greater investment in EV technology, which Weston estimates will total $70 million in purchase incentives if adoption rates are to meet a 12-year target of 137,000 electric vehicles on the road by 2030.

Weston maintained that promoting EVs still gets some of the best carbon reduction per-dollar ($16 per ton avoided) compared with other carbon mitigation strategies.

“There’s a lot more complication here,” he said. “At the current price of electricity, it’s actually not cheaper to run an electric car than it is for a gasoline car. … I did the math, and we have a motor car.”

Campbell noted that at least six electric vehicle owners were sitting at the committee table. He suggested in order to increase the adoption of EVs, there may need to be some sort of electricity subsidy to mitigate charging costs.

“So there’s maintenance on two systems now and I’ve seen some calculations that there are not savings,” Higley said. “It may be savings in the long-run for carbon emission reductions, but as far as [the homeowner is concerned], as a matter of fact, it’s substantially more.”

In all, Rep. Timothy Briglin, D-Thetford and chair of the committee, said after having heard all about the cost and benefits of carbon taxes, these other non-tax plans seemed preferable.

“I’m surprised by the modesty of the investment that’s required relative to what we’ve been talking about around this building for a couple of years now,” he said. ” … Some of the strategies that we’ve looked at for pricing, they’ve got to be pretty significant in order to really change people’s behavior.”

CORRECTION: An earlier version of this story listed the annual cost of running five programs as $16 million, with a 10-year amount of $160 million. The correct amounts are $60 million annually, with a 10-year cost of $600 million.