The latest polling in New Hampshire shows the top-tier Democratic presidential candidates separated by just 5 percentage points a month away from the country’s first primary.

Leading the second-tier candidates is Minnesota Sen. Amy Klobuchar at 6 percent. She and the top four have thus far qualified for a Jan. 14 debate in Iowa ahead of that state’s Feb. 3 caucuses. CNN and the Des Moines Register, which are co-hosting that event, will release a poll at 6 p.m. Friday, just ahead of the Democratic National Committee’s deadline to qualify for the debate. 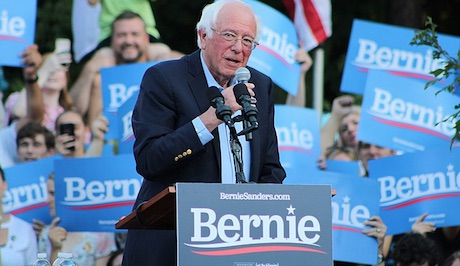 U.S. Sen. Bernie Sanders out on the stump in September 2019.

The Monmouth poll differs greatly from one released earlier this week by CBS News, which showed Sanders leading in New Hampshire at 27 percent and Buttigieg a distant fourth at 13 percent. Biden and Warren had 25 and 15 percent, respectively.

An earlier Monmouth poll in New Hampshire showed Warren leading the field at 27 percent with Biden close behind at 25 percent. Sanders was at 12 percent at the time and Buttigieg was at 10 percent.

“To the extend that New Hampshire voters could take some cues from Iowa, it’s also worth keeping an eye on lower polling candidates like Klobuchar if any of the leading contenders stumble in the earlier Iowa contest,” Patrick Murry, director of the Monmouth University Polling Institute, said in a statement.

The poll was conducted Jan. 3-7 with 697 registered voters. Of those, 404 said they are likely to vote in the New Hampshire Democratic primary on Feb. 11.

Self-described liberals in the poll said their preference was Sanders at 26 percent and Warren at 24 percent, with Biden and Buttigieg each receiving 16 percent.

Self-described moderates and conservatives favor Buttigieg and Biden at 25 and 22 percent, respectively, with Sanders at 10 percent and Warren at 7 percent.