The National Institutes of Health reiterated its stance Thursday that it did not fund gain-of-function research in Wuhan, China, despite having released documents on Wednesday showing that it funded the creation of a lab-made SARS coronavirus that was more deadly and pathogenetic towards mice with humanized cells. 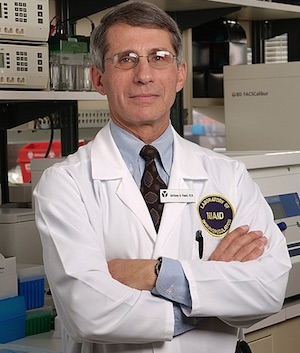 Mainstream media reported this week that Dr. Anthony Fauci, director of the National Institute of Allergy and Infectious Diseases, was untruthful about whether the U.S. had funded experiments on coronaviruses that made them more dangerous and transmissible.

EcoHealth Alliance informed the NIH in August that its lab-created rWIV1-SHC014 S coronavirus killed 75% of mice with humanized cells, while the natural WIV1 virus it was based on killed less than 25% of mice with the same humanized cells. The experiments were conducted with the Wuhan Institute of Virology between June 2018 and May 2019.

“These results suggest that the pathogenicity of SHC014 is higher than other tested bat SARSr-CoVs in transgenic mice that express hACE2,” EcoHealth Alliance told the NIH in its progress report.

NIH Principal Deputy Director Lawrence Tabak told House Oversight and Reform Committee Ranking Member Rep. James Comer of Kentucky on Wednesday that EcoHealth’s failure to report its findings right away was a violation of the terms of its research grant. Tabak added that his agency has provided the group five days to submit “any and all unpublished data from the experiments and work conducted under this award.”

Tabak’s letter was an admission by NIH that the agency’s director, Francis Collins, and National Institutes of Allergies and Infectious Diseases Director Dr. Anthony Fauci, have been untruthful in their claims that the EcoHealth Alliance research grant in Wuhan did not involve gain of function research, Rutgers University professor Richard Ebright said on Twitter Wednesday.

But an NIH spokesperson said Ebright’s tweet was incorrect, telling the DCNF that EcoHealth’s research still didn’t meet the definition of gain of function research spelled out in the Potential Pandemic Pathogens Control and Oversight (P3CO) review framework, even though the group’s lab-created virus was tested and shown to be more deadly towards mice with humanized cells.

“Because a mouse got sicker doesn’t mean it would make a human sicker,” the NIH spokesperson said. “The mouse study doesn’t tell us anything about human biology except how the viruses interact with the human ACE2 receptor. As you know mice and humans are very different.”

“Importantly, the presence of the human receptor alone is not sufficient to drive human infection,” the spokesperson said. “All other aspects of the mice, including the immune system, remained unchanged in this model.”

Ebright said the NIH was effectively saying the only way for EcoHealth to determine whether their lab-created virus is more infectious towards humans is to test the virus on a human.

“They have no shame,” Ebright told the DCNF.

“In essence, they are claiming that, because the NIH did not fund infection studies with lab-generated viruses and human subjects — Uyghur detainees? Falun Gong dissidents? — the NIH did not fund gain of function research or potential pandemic pathogen enhancement subject to the federal policies,” Ebright said.

The NIH spokesperson objected to Ebright’s interpretation, but did not provide an answer when asked whether there were any tests aside from infecting humans with the virus that could have proven to the NIH that EcoHealth’s lab-created virus was more infectious towards humans, or should be flagged for further review under the P3CO framework.

6 thoughts on “NIH admits funding coronaviruses experiment that gained functionality, but refuses to call it ‘gain of function research’”