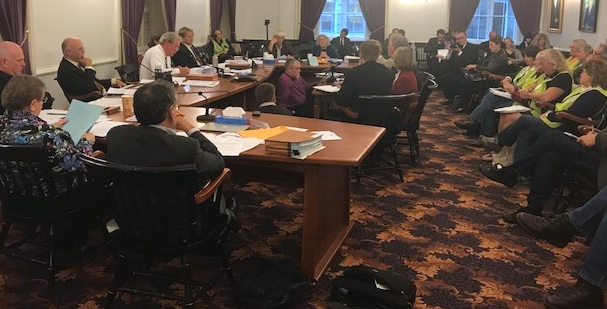 GREEN VESTS AGAIN: On the right, members of Vermonters for a Clean Environment and others who favor of stronger restrictions on turbine noise watch the as the Legislative Committee on Administrative Rules takes testimony from members of the Public Utilities Commission.

MONTPELIER — The Legislative Committee on Administrative Rules accepted sound standards crafted by the Public Utilities Commission for wind turbines by a 5-2 vote. This rule-making initiative is a requirement of 2016’s Act 174 energy siting policy.

So far, both critics and advocates of the new rules appear mostly unhappy with the outcome reached Thursday by the eight-member committee, which is meeting to decide if new noise limits for future wind energy development in Vermont are in keeping with legislative intent of the act.

Wind developers argue that the new limits of 39 decibels during the night and 42 decibels at day around homes near wind turbines could hamper new projects. Anti-wind activists say the limits might not be strict enough.

“What I found troubling at both this hearing and the one prior is pretty much no one asked any questions of the PUC to whether this rule before them would be protective to the neighbors in terms of the noise impacts,” said John Brabant, director of regulatory affairs for Vermonters for a Clean Environment, a group opposed to industrial wind projects.

“The people, who were clearly on the side of the industry, they were so focused on the industry’s interests. They took no interest in the actual citizens of this state who are neighbors to these,” he said.

“The sound standards at existing wind farms in Vermont are fully protective of public health,” Sarah Wolfe, clean energy advocate for VPIRG, told True North. “This new rule is not about public health, and the likely result of it is that there will be no new large wind projects built in Vermont while it is in place.

“Taking this critical renewable energy resource off the table is the wrong choice for Vermont’s economy, environment, and the health of our citizens.”

Rep. Robin Chesnut-Tangerman, P-Middletown Springs, voted against the measure. He commented that almost any sound level produced by turbines is going to bother somebody.

“I think it’s really difficult to pick a number that works because people have such different sensitivity to sound and vibration,” he said. “Some people don’t even notice a higher volume and some people are much more sensitive to lower volumes.”

He said he thought the PUC did a good job of explaining its reasoning for the levels they came to, but he said it’s probably going to be a little too restrictive for turbine development, which should play a role in the state’s green energy goals.

The process is not over. The PUC has two weeks to submit final rules, and those who continue to take issue with the result can petition the commission to make further changes from there.

A sticking point for both sides is that the PUC originally included a setback provision, meaning industrial-scale turbines must be constructed away from the nearest home by a distance of 10 times the height of the turbines. This is a standard currently used in Cape Cod, Massachusetts.

The commission pulled the provision earlier this fall, upsetting those in favor of stronger rules.

Brabant said he takes issue with the 39-dBA night time limit and 42-dBA day time limit. These noise levels are to be measured 100 feet away from the home to mitigate background noise coming from the house.

Brabant called it “a presumptive standard” because it assumes that as sound travels over the 100 feet and into the home, at least 9 decibels are attenuated.

“There’s been testing done by the DPS [Department of Public Service] and it only attenuates 1-to-3 dBA,” he said. “It was a huge give-back to the industry.”

Vermonters for a Clean Environment Director Annette Smith is optimistic that an even more strict 30-dBA standard is possible. She said statements made by the PUC seem to document on record that a 30-decibel inside-sound standard is the clear intent of the law, even if on paper the limits pertain to the outside of homes.

“Legislative record was developed at LCAR yesterday, and in the hearings it is very clear that the intention of this rule is to maintain the 30-dBA interior standard,” Smith said.

Public Utility Commission policy analyst Kevin Fink stated during the hearing that the 30-decibels  interior limit is the goal.

Brabant said one thing he likes about the new rules is sound levels must be measured every second. He and Smith claim if measurements are spread out over 30 minutes or an hour, the average reading may show compliance when, in fact, substantial noise violations are taking place.

In his closing statements before the vote, state Sen. Joseph Benning, R-Caledonia, said that if the Legislative Committee on Administrative Rules voted against the rules, it would be undermining the work of the PUC, which, in his opinion, achieved what Act 174 required.

“If LCAR now objects in an attempt to force the PUC to change its chosen sound level standards, LCAR itself would become susceptible to claims that its decision was arbitrary or beyond legislative intent,” Benning said. “Indeed, some will argue a simple majority of LCAR members can become a Star Chamber with unchecked power over legislative intent and agency responsibilities.”

Yesterday’s hearing can be viewed in its entirety here.