Former New York Attorney General Eric Schneiderman resigned in May, but his climate probe into Exxon has not slowed as the oil company continues to fork over documents related to the case. 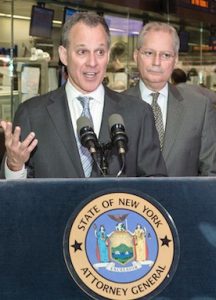 It’s been more than two years since the now-disgraced former lawman began his legal pursuit of Exxon — the state has yet to charge the company for hiding information about climate change. The oil company has already provided four million documents to the New York attorney general’s office (OAG) since the probe began in 2015, according to a court memo Exxon filed on July 9.

If the documents were stacked on top of one another, the memo noted, it “would stand higher than the Empire State Building.” Exxon has also provided the AG’s office with 18 witnesses for interviews, who collectively have testified for 25 days.

“If there were ever any doubt, this mountain of evidence makes unmistakably clear that OAG’s investigation has met its natural end,” the company wrote in the court memo. The battle against Exxon hit a speed bump in May when Schneiderman resigned following allegations he assaulted several women.

Schneiderman was perceived as the head of the crusade, but the New York AG had his hands in other pies as well.

New York took 55 legal actions during Schneiderman’s leadership, a sum tied with California for the most of any state, according to data from the New York University Law School’s State Energy and Environmental Impact Center, a projected created in 2017 to escalate attacks against President Donald Trump’s rollback of Obama-era environmental regulations.

Schneiderman’s investigation kicked off a slew of lawsuits from New York City; Oakland, California; San Francisco; and San Mateo, California, against Exxon and other major oil companies. They claimed the Texas-based oil company was partially to blame for weather-related floods. All four lawsuits were eventually rejected in court. Baltimore has also sought to initiate a lawsuit against oil producers.

Much of Schneiderman’s initial probe is based on reports from liberal-leaning media outlet InsideClimate News, as well as Columbia University — both of which claim Exxon has known the risks of global warming for decades but kept such knowledge under wraps. The probe has come under intense scrutiny, especially among analysts who raise doubts about the research behind the pursuit.

Courts have dinged Schneiderman and Massachusetts Democratic Attorney General Maura Healey’s investigation for constantly shifting goal posts. The New York Supreme Court, for instance, told Schneiderman in a July 2017 court hearing that the Democrat should either prove the probe is legitimate or bring the pursuit to a speedy conclusion.