New York Attorney General Letitia James filed a lawsuit Thursday that seeks to have the National Rifle Association dissolved, saying the gun rights organization has been engaging in “illegal conduct” by funneling charitable donations to its leaders.

James accuses longtime NRA leader Wayne LaPierre and a number of other executives at the nonprofit advocacy organization of diverting “millions of dollars away from the charitable mission of the organization for personal use by senior leadership, awarding contracts to the financial gain of close associates and family, and appearing to dole out lucrative no-show contracts to former employees in order to buy their silence and continued loyalty.” 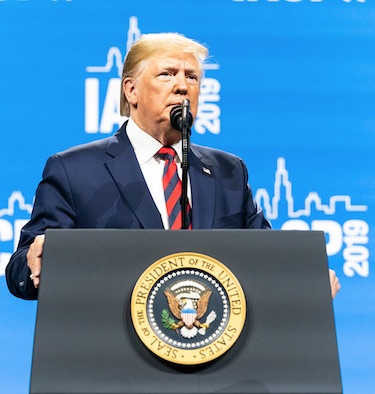 Ahead of a trip to Ohio on Thursday, President Donald Trump expressed dismay at word of the lawsuit being filed against the NRA. “I think the NRA should move to Texas and lead a very good and beautiful life … or to another state of their choosing,” he said.

They are accused of causing the organization to lose more than $64 million over the course of three years through the alleged acts.

In a statement in response to word of the lawsuit, the NRA accused James and her office of trying to roll back gun ownership rights. The organization also announced that it was countersuing the state.

“This was a baseless, premeditated attack on our organization and the Second Amendment freedoms it fights to defend,” the NRA said. “You could have set your watch by it: the investigation was going to reach its crescendo as we move into the 2020 election cycle. It’s a transparent attempt to score political points and attack the leading voice in opposition to the leftist agenda. This has been a power grab by a political opportunist – a desperate move that is part of a rank political vendetta.”

The NRA is in the news frequently as the leading advocacy group in the U.S. when it comes to Second Amendment rights. To supporters, it is a staunch defender of the rights of ordinary Americans to bear arms; its detractors have accused the NRA of bearing partial responsibility for mass shootings they say are uncommon in other countries.

“The NRA’s influence has been so powerful that the organization went unchecked for decades while top executives funneled millions into their own pockets,” James, a first-term Democrat, said Thursday. “The NRA is fraught with fraud and abuse, which is why, today, we seek to dissolve the NRA, because no organization is above the law.”

The lawsuit was filed in State Supreme Court in Manhattan.

The NRA has been beset by leadership battles in recent years. Former NRA President Oliver North lost a power struggle with LaPierre in 2019 amid accusations by North the organization’s funds were being misspent.

The attorney general’s lawsuit accuses LaPierre, Phillips, Powell and Frazer of using the powerful charity for their own personal ends.

“They overrode and evaded internal controls to allow themselves, their families, favored board members, employees, and vendors to benefit through reimbursed expenses, related party transactions, excess compensation, side deals, and waste of charitable assets without regard to the NRA’s best interests,” a news release from James’ office states.

Ahead of a trip to Ohio on Thursday, President Donald Trump expressed dismay at word of the lawsuit being filed.

“I just heard about that, that’s a very terrible thing that just happened,” said Trump, who was recently endorsed for reelection by the NRA. “I think the NRA should move to Texas and lead a very good and beautiful life … or to another state of their choosing.”

Images courtesy of Wikimedia Commons/Michael McConville and The White House