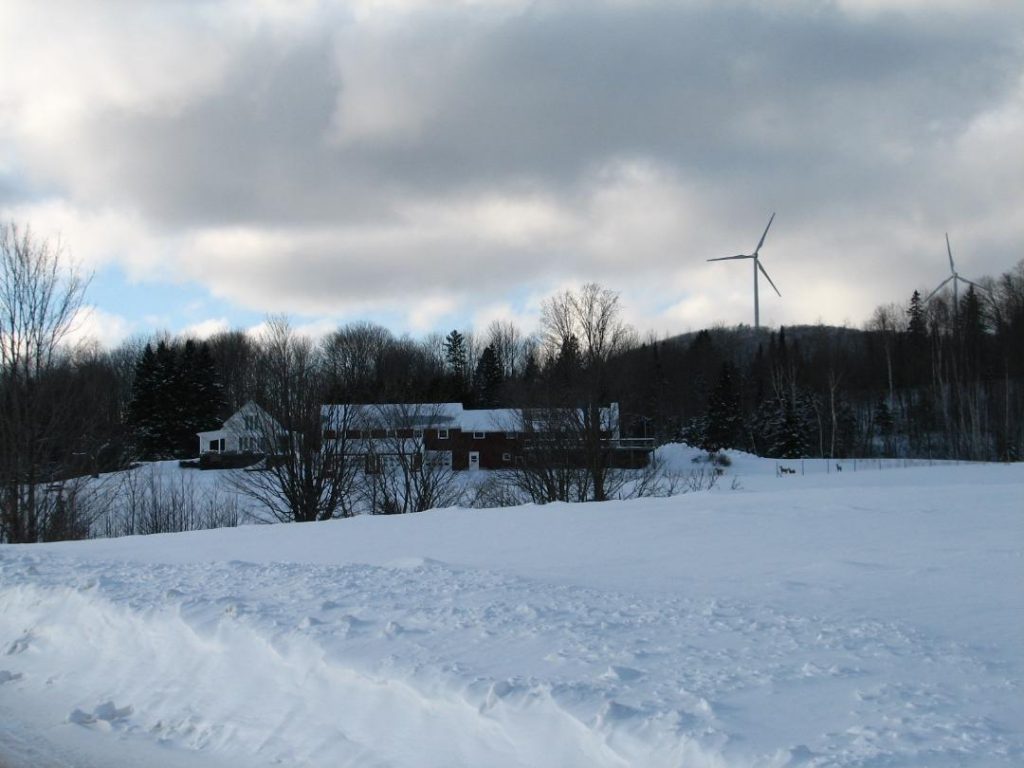 TOO CLOSE FOR COMFORT: Out back of Paul Brouha’s house are turbines from the Sheffield Wind project.

SHEFFIELD — For several years, one old-school Vermont senior has been the tip of the spear in the fight against industrial-scale wind turbines — local resident Paul Brouha.

Brouha, 73, lives just over 6,000 feet from the nearest turbine of the Sheffield Wind project, a green energy installation comprised of 16 418-foot-tall turbines.

In 2011, Brouha filed his first complaint with what today is known as the Public Utility Commission. Today, he finally feels that his repeated complaints and financial investments into independent noise and vibration studies could start to pay off.

“We’ve got sort of a David versus Goliath theme to it,” Brouha said.

The latest sound report came from a company called Aercoustics. The independent sound expert contracted during the administration of Gov. Peter Shumlin concluded that the noise coming from Sheffield Wind is too loud.

The report details that during high wind conditions from May to September, decibel levels reached 5 points higher than what was permitted in the project’s certificate of public good from 2007.  It states an increase of just 3 decibels exponentially increases the intensity, disrupting the ability to sleep or live peacefully during waking hours.

To achieve compliance, potentially three turbines may need to be shut down.

Chad Reed, director of investor relations for Terraform Power, the current owner, responded to True North regarding the latest study.

“We continue to review the recently published third-party acoustics report, which, among other sources, may inform local authorities on their ultimate findings,” he said. “We remain committed to providing clean renewable energy to our customers and working alongside the local communities in which we operate.”

Last Friday the Public Utilities Commission held a status conference involving their hearing officer Micah Howe and attorneys for TerraForm and for Brouha. They agreed that all the appropriate data would be available for scrutiny by this Friday.

A next step is the PUC and the Department of Public Service need to concede that a noise violation occurred. If they do, then the two entities will begin the compliance phase, which will involve more sound testing. Aercoustics would continue to perform the tests.

Howe told True North that progress was made at the status conference.

“They are working on a process for proceeding forward in the investigation,” he said. ” … That will set the remaining steps.”

In Brouha’s press release, he noted that the PUC has done little to gain his confidence over the years.

“The PUC accepted, without any independent investigation, Vermont Wind’s [a limited liability corporation formed in 2004 as the project’s business entity] representation was that there could not possibly have been a violation of the CPG noise monitoring plan or the noise standard limitation for the project,” he wrote.

This time Brouha said he has reserved hopes for progress.

“We’ve been hopeful, but we thought we’ve had things pretty lined up before only to have our hopes dashed,” he said. “This whole thing should have been taken care of within three months of the filing of my complaint in 2011.”

He further said that even before the project was completed in 2011, it was clear from the modeling that the noise standards could not be met.

“We were just collateral,” he said of him and his neighbors. One of his neighbors, the Therrien family with two young children, chose to flee their home of 20 years due to noise from the wind farm.

He told True North that his goal is to pursue this fight to a conclusion and force the state to practice good sound monitoring and compliance protocols, and ultimately hold these turbine operators accountable for how they do business.

“I’m pleased to say, at least in that regard, we are building the base for that to be adopted,” he said.

Brouha explained that at some point he would like to explore options for his own compensation for all the stress he’s endured.

“That’s left for me under some sort of a filing for a nuisance suit or court filing against the state of Vermont,” he said.

Asked if he’s ever tempted to just give up, sell his home for a loss, and move on, Brouha said no.

“My parents brought me here when I was born,” he said. “That was almost 73 years ago. This is my home, it’s not just a house. It’s not something that I can just walk away from, this is me.

“I’ve got a right to the peaceful use and enjoyment of my property, and to be left alone.”