A new report on which states are best and worst for military members to consider for retirement ranks Vermont among the worst states.

The report, titled “Best and Worst States for Military Retirees”, places the Green Mountain State at 49th among the 50 states and the District of Columbia. 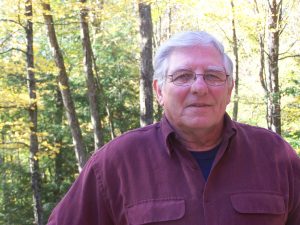 Even Vermont’s quality of life, often heralded by state cheerleaders as a positive, ranked 36 for ex-military thinking of relocating. Health care resources came in at a lackluster 40th place in the report.

Interestingly, the reports shows that so-called red states are friendlier to military retirees than blue states. Vermont is a blue state run by Democrats.

“This  information is consistent with other reports. Kiplinger’s 2018 report had Vermont as the 11th least-tax friendly state for military retirees,” Robert E. Burke, director of the Vermont Office of Veterans Affairs in Montpelier, told TNR.

Burke is a U.S. Navy veteran and former military professor at the U.S. Naval War College in Newport, Rhode Island.

“We have supported legislation for the last five years that would partially, or totally, exempt military retirement pay from income taxes,” he said. “In the governor’s budget address this year he proposed a two-year phase-in plan … (but) it never made it out of committee. We have always pitched it as an economic multiplier, to not only attract retired military to the state, but to help us retain those that are currently living here.”

While no Vermont town happens to be on the retirement list of retired U.S Army Lt. Col. Michael C. Wise, nearby Watertown located across Lake Champlain in New York made the grade. 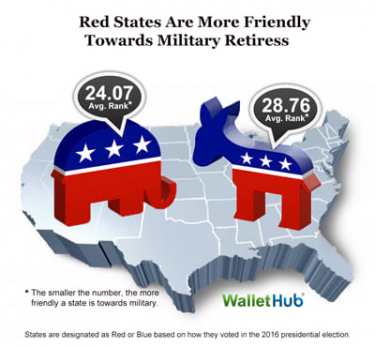 NOT FRIENDLY: Vermont is ranked among those Democratic “blue states” less friendly to military retirees than Republican “red states.”

Wise, assistant director of Military and Veteran Services at Eastern Michigan University, was one of the retired military experts consulted by WalletHub for its report.

“There are several opinions out there on the best … (places) for military members to separate or retire in the U.S.,” according to Wise. “I believe that when deciding where to retire, one should consider many things: for example, the location of VA Healthcare services. [Or] does the state offer tax incentives for veterans, do public and private healthcare facilities exist that cater to TRICARE Select (retiree health care insurance program for spouse and dependents)? Cities and states that have large military bases in their communities are often recommended to be the best places to retire as the entire community supports the military. For example, San Antonio, Texas (Ft. Sam Houston); Killeen, Texas (Ft. Hood); Leavenworth, KS (Ft. Leavenworth); and Watertown (Fort Drum). Great military states are Georgia, Texas, Kansas and Kentucky.”

Regarding Watertown, the upstate New York town is home to Fort Drum and the 10th Mountain Division. Many Vermonters have served, and continue to serve, in the division. Watertown is “home away from home” for many Vermont veterans. In 2003, the Vermont Ski Museum named over 200 Vermonters who served in the 10th Mountain Division at Fort Drum in its Skiers Hall of Fame.

Retired U.S. Marine Corps Lt. Col. Dan Smith, director of Veteran Affairs at Clarion University of Pennsylvania, another ex-military expert consulted by WalletHub for its Best and Worst States study, has looked at all the pluses and minuses of Middle Atlantic and New England states as possible places for former U.S. military members to consider for retirement.

While he gives high praise to the health care and staff of the Veterans Administration Hospital in White River Junction, he doesn’t find the state’s current economic status to be attractive to retirees, be they ex-military or otherwise.

“My family connections are here and that’s why I haven’t moved. … (But) with high taxes and restrictions it’s hard for any retiree with modest means to live here. People are leaving the state. Plus, there are no veteran preferences on anything like that here in Vermont, which you see in other states such as Florida with military tax breaks and other things,” Chioffi told TNR.

“The people running this state don’t have a ‘connect’ with military retirees,” Chioffi added. “The politicians give lip service to us veterans, but when push comes to shove, it remains just that, lip service.

“U.S. Sen. Bernie Sanders is touted as a friend to veterans; I will give him credit for helping veterans with the Outreach Van Program which started here in Rutland County. But why did he do it? I guess it must have soothed his soul for his anti-American, draft dodging, past history. I guess doing this was salve for the soul. Remember, he ran off to avoid military service. And did Bernie vote for the veterans pay increase in Congress? I don’t know the answer for sure, but most Democrats voted no on this.”

“My family is all here and plan to stay for now anyway … (but) most military retirees wouldn’t want to come to Vermont because the state taxes their pension and their social security,” he said. “Property taxes and the cost of living are much higher than other states so retirees lose a lot of their fixed income. Many service men and women retire in states with a military base or Department of Defense contractor located nearby because they are too young to retire and they know that they can land a good paying job with these contractors.  Contractors hire them because of their military training, personal discipline and ability to get a security clearance.  Military retirees are a good deal for defense and local contractors.”

On why red states treat veterans better than blue states as shown by the WalletHub report, Williams said it comes down to simply setting out a welcome mat or not.

“Red states want military retirees because they really want these folks in their state,” he told TNR. “I don’t know the statistics, but the vast majorities of veterans spend their pensions in that state, and usually get a second source of income to spend there. The spouses of these retirees also contribute to the economy of the state. Typically, (military) retirees are good citizens and the states where they reside do not have to pay for their drug use, rehabilitation or incarceration.  Most retirees who go into the red state private workforce or local government contribute their years of planning and execution experience to local government operations or volunteer work.”