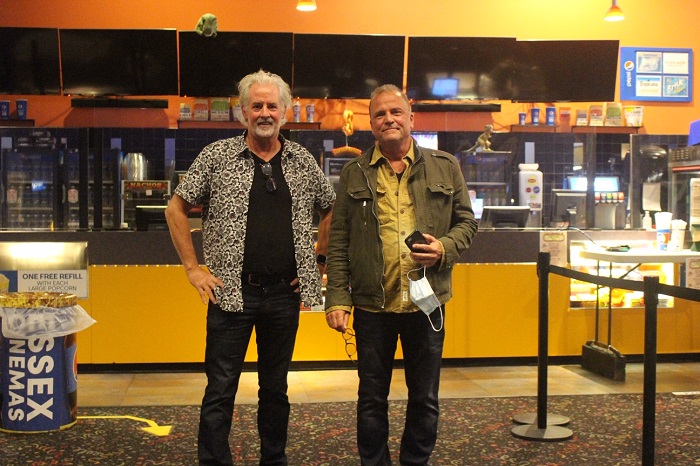 The political satire film “Free Lunch Express” premiered at Essex Cinemas on Thursday evening as an audience of about 70 Vermonters came out to watch a comical take on the life and perils of U.S. senator and two-time presidential candidate Bernie Sanders.

With an 80-minute run time, the film begins in the 1950s with young Sanders growing up in New York City. In one of the opening scenes, he appears in his bedroom surrounded by flags, posters and symbols of Soviet Russia. Sanders, who complains of being bullied at school by rich kids, decides to make a blood-pact in front of a picture of the infamous Soviet leader Joseph Stalin. 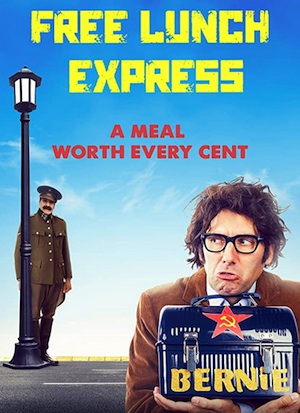 The young Sanders pledges to dedicate his life “to never picking up a dinner check, never donating to charity, and, like in the glorious Soviet Union, making sure the government pays for everything.” The film continues poking fun at socialist ideas and ideals with rapid-fire silliness.

The movie was produced by Bradford Broyles and written and directed by Lenny Britton.

Broyles cites the 1980 parody film “Airplane” (Leslie Nielsen) as one of his primary sources of inspiration, and says “Free Lunch Express” is aimed at audiences from all sides of the political spectrum.

“What we did is we made a very silly satire about the life and times of Bernie Sanders. It’s not overtly partisan at all,” Broyles said before the showing.

While mostly fictitious, many scenes are based on real-life Bernie headlines.

“As Vermonters we’re privy to a lot of the backstory about Bernie Sanders that maybe the rest of the country isn’t familiar with,” Broyles said. “And so we cover a lot of ground in the movie that you are going to see that is basically ripped from the headlines of real things that happened in Bernie’s past to where he is today.”

One pivotal moment, both in Sanders’ real life and in the movie, is when the moderator during one of the 2016 presidential primary debates asked Sanders about the Hillary Clinton email scandals. Rather than go on the attack, Sanders balked and said that Americans are sick of hearing about it. The movie portrays an instant moment of deep regret for Sanders as Clinton laughs mockingly at him.

For viewers who are into Washington, D.C., conspiracy theories, there’s at least one reference to a news story in a joke when the Clintons tell Sanders he can accept their terms for the election or “be found by the park police next to the cannon” — a reference to former Clinton deputy counsel Vince Foster, who was found mysteriously shot in a park across the Potomac River from Washington in 1993.

The star of the film is Sam Brittan, who puts all his talent into the portrayal of the young-adult, pot smoking version of Sanders during his years living in Vermont hippie communes, and later as mayor of Burlington. Brittan has been in several other movies and has more material coming in the TV comedy “The Potwins.” Many Vermonters will recognize him from his satire work in the YouTube video series “News Done Right!: Fan Club.”

As the plot moves along, Brittan pokes fun at Bernie’s socialist notions of ownership versus the collective, such as in scenes where he is seen hoarding marijuana while his friends look on in frustration. At one point Sanders tells how everyone deserves to be equally “high” with each other in true Marxist-rhetoric.

There are celebrity cameos, some apparent and some hidden. Kevin Sorbo (of 1990s “Hercules” fame) makes a brief appearance as George Washington, who comes to Sanders in a hallucinatory moment to try and convince him that his socialist ways are misled.

Malcolm McDowell (1990s “Star Trek,” 2007 “Halloween”) is the film’s narrator. Britton says McDowell agreed to do the film because he disliked Sanders and was a fan of Hillary Clinton in 2016.

Young Bernie is played by Jonah Britton, while Charles Hutchins plays older Bernie. Jane Sanders, the Vermont senator’s wife, is played by Elaine Ballace. The full cast and other film details can be found on its IMDb page. The preview can be seen here on YouTube.

Britton, who has an extensive film portfolio in writing and directing, is a Vermonter with some background in politics. He was a candidate for U.S. Senate in 2010 when he ran against Sen. Patrick Leahy, D-Vt.

The movie will not be distributed wide-spread in theaters due to coronavirus restrictions, but it can be seen soon at Apple iTunes, on Google Play and on Amazon Prime video, as well as in DVD and Blu-ray formats.