BURLINGTON — A Newark, New Jersey, man has been sentenced to a year of probation after pleading guilty to smuggling two illegal aliens across the northern U.S. border at Beecher Falls in October 2017.

On Thursday, Jose Moreira de Sousa, a naturalized U.S. citizen, also was ordered by U.S. District Judge Christina Reiss to pay a fine of $1,000 and an additional $5,100 in “special assessments,” according to a joint statement from the Swanton Sector of the United States Border Patrol and the United States Attorney’s Office. 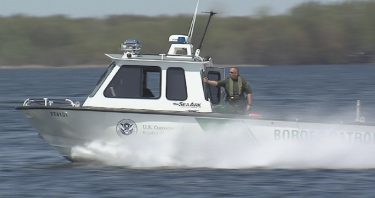 U.S. Border Patrol agents using a boat to patrol the border in Vermont.

The Swanton Sector Border Patrol is tasked with securing the land border between ports of entry in Vermont as well as New Hampshire and northeastern New York.

According to court documents, Moreira de Sousa entered the country from Canada during the morning of Oct. 17. A concerned citizen notified border agents at the Beecher Falls Border Patrol station of suspicious activity.

Upon further investigation, the agents found that two Portuguese nationals crossed the border on foot with the help of Moreira de Sousa. Neither of the two had permission to be in the states.

With the southern border being a hot spot for illegal crossings, the northern border is being utilized more frequently for illegal entry into the country, according to Christina Nolan, the U.S. Attorney for the District of Vermont.

Over the last nine months, U.S. Border Patrol agents apprehended 267 people for coming into the country illegally at the Canadian-Vermont border. That’s up from 132 apprehensions in fiscal year 2017.

Nearly a dozen people are currently being held in Vermont correctional facilities on charges of either entering the country illegally or aiding an alien in doing so.

According to an affidavit from a Border Patrol agent, three Guatemalan citizens were caught trying to cross the border illegally in Derby Line on the morning of July 1. Imer Mardoqueo Castilla was indicted on felony charges last month for attempting to transport the men after they crossed.

A recent policy announced by U.S. Attorney General Jeff Sessions requires criminal charges be filed against anyone who crosses the border illegally. However, Vermont isn’t following the “zero-tolerance policy” laid out by the Department of Justice for apprehending a suspect accused of entering the U.S. illegally or assisting someone in crossing illegally.

A possible reason for the increased traffic of illegal crossings coming from the northern border is a Canadian policy that removes visa restrictions for citizens coming into the country, as an attempt to strengthen ties with Mexico, Romania and other countries.

Another lure for illegal immigrants coming through Canada is that Border Patrol has fewer resources committed to policing the northern border compared to the U.S.-Mexico border.

Smugglers are cashing in by sneaking immigrants in for large sums of money. According to court documents, smugglers have been paid upwards of $4,000 or more for helping immigrants illegally cross into the United States.

Over a span of 300 miles across the northern borders of Vermont, New York and New Hampshire, Border Patrol agents have apprehended 324 illegal aliens this fiscal year.

In response to the recent influx of illegal border crossings, checkpoints have been popping up in Maine, New Hampshire and upstate New York highways to enable U.S. Customs and Border Protection to stop illegal activity.

One woman was charged with smuggling four people across the Canadian border into upstate New York after she was apprehended at a designated Border Patrol checkpoint.

In June alone, 85 people were caught trying to enter the states without permission across the three states alone. That’s up from 17 in June 2017 and 19 in June 2016, the Associated Press reported.

Most of the illegal crossings are within a 30-mile radius on the Vermont border with Quebec, where Interstate 91 reaches to Derby Line.

Derby Line shares a special relationship with neighboring Canadian town Stanstead. For example, the towns share community resources, including a public library with one side in Derby Line and the other in Stanstead.

In October 2017, 16 people were apprehended at a hotel near Derby after 14 of them had illegally entered across the border just west of Derby Line. The remaining two suspects were identified as smugglers.

Royal Canadian Mounted Police made two separate arrests last month for human smuggling cases along the Derby Line and Stanstead border. A Mexican man who did not have legal status to be in Canada or the U.S. was convicted of bringing immigrants to the Vermont border. According to reports, he was convicted and will spend six months in jail before he is deported.