According to former New Haven Selectman Douglas Tolles, New Haven GLC “is on prime agricultural land and its size violates both the old town plan and the new town plan.”

A recent victory by solar proponents in the town of New Haven has a former New Haven selectman hopping mad.

Douglas Tolles, who served on the New Haven Selectboard until 2017, claims a currently inactive 500-kilowatt photovoltaic solar project in town is in violation of the new town plan, old town plan and state regulations regarding net metering. The net-metered New Haven GLC Solar project, located along the Ethan Allen Highway,  U.S. Route 7, was constructed a year ago.

Tolles has been the most vocal opponent of large commercial solar projects within the town. He is also critical of the project’s developer, Green Lantern Group of Waterbury. Green Lantern is a self-described capital and asset management company that also set up GLC Solar Fund, the first tax-equity green energy fund in Vermont

During the course of project development in 2017, New Haven appealed to the Vermont Supreme Court for help in the matter. 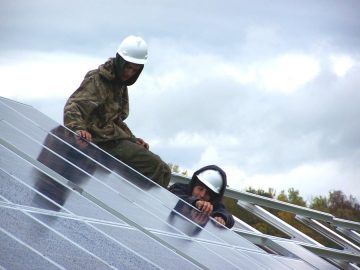 The Vermont Supreme Court ruled in favor of the town of New Haven by overturning a PUC decision depriving it of a hearing regarding the New Haven GLC solar array.

Starting last year, the court ruled in favor of the town by overturning a Public Utilities Commission decision depriving it of a hearing regarding the New Haven GLC solar array.The solar array is located next to a “scenic” roadway defined by the town.

The unanimous decision of the full Supreme Court had reversed the PUC’s grant of a certificate of public good, the state’s official permit for a construction project, to New Haven GLC.

The town originally appealed the Public Utilities Commission’s issuance of a certificate of public good. The case went back to the commission for hearing to settle the disagreements between the parties.

But now a recent ruling by the Public Utility Commission, which was instructed by the Vermont Supreme Court to deal with the matter, instructed New Haven GLC to pay the town $26,500, as both a reimbursement of the town’s attorney’s fees and a contribution to the New Haven Conservation Fund. It must also reinstate the certificate.

The parties involved in the solar deal appeared to be pleased with the recent PUC agreement.

“New Haven GLC Solar LLC is very pleased to have reached an agreement with the Town of New Haven, which will enable us to turn our solar array back on and recommence generation of clean, Vermont-made solar energy,” said South Burlington resident Sam Carlson, director of project development for the Green Lantern Group, the builder of the solar array. 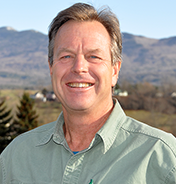 “This solar project is, in fact, a model for other solar projects in the state in terms of its out-of-sight location, coordination with neighboring landowners, and pollinator-friendly plantings of flowers throughout the solar array done in partnership with Middlebury’s own Bee the Change.”

The currently inactive New Haven Conservation Fund is also a beneficiary of the PUC-struck agreement, although it’s acting chairperson Dean Percival wasn’t aware of receiving any funds when TNR contacted him.

“I haven’t seen a copy of the agreement so I can’t comment on it,” Percival told TNR. “Normally, I don’t comment unless I run it by my commission. I, of course, have my own opinions but always hesitate voicing it as people might think it is a statement from the commission.

“The Conservation Commission does not participate in the discussions for solar projects unless they impact negatively on the land or wildlife. That excludes the visual impact. The Conservation Fund does not exist at this moment. It will be an article on the upcoming Town Meeting warning. We hope it passes. … I have asked Pam Kingman, the town clerk, to send me a copy of the agreement.”

But while Percival was unaware of the agreement, and Carlson and town officials consider the matter closed and are moving on with solar plans, Tolles, the former selectman, is sticking to his guns in opposition.

“New Haven GLC is on prime agricultural land and its size violates both the old town plan limit of 300 kilowatts and the new town plan, which limits the size and scope of solar projects considerably,” Tolles said. “State net-metering regulations strongly require (solar) sites to be (in) places of less value, such as brownfields, closed dumps, etcetera. I know Selectman Taborri Bruhl is behind all of this, pushing more of these solar project through despite the new town plan and overcapacity.”

Selectboard member Bruhl did not respond to TNR’s email request to answer questions about the solar project.

Meanwhile, Tolles claims that the developer of the New Haven GLC project wants to construct another 500 kilowatt solar array “across the street on the same parcel.” He maintains it is one more violation of the 2017 town plan and defies state “segmentation rules” regarding solar power stations.

Green Lantern’s Sam Carlson confirmed Tolles claim and noted that there has been some work on a new solar project near the 500-kilowatt array Tolles is concerned about.

“We do have another solar project developed and submitted for permitting in New Haven, but it is stalled pending resolution of a dispute between Green Mountain Power and another solar developer,” Carlson told TNR. “That dispute has tied up capacity for additional solar electricity generation on GMP’s Weybridge sub-station. The dispute has gone on for years now and it’s not clear when the Public Utility Commission will resolve it or in whose favor. So, at this time, the second project is highly speculative.”

When contacted by True North Reports, New Haven town attorney Cindy Hill declined to comment, saying the Selectboard chair was the appropriate person to speak on the issues.

Selectboard chair Kathy Barrett also evaded questions when contacted by True North. However, in an email she said: “By a vote of 3-2 at the Jan. 9, 2018 Selectboard meeting, the Selectboard authorized the signing of the Settlement Agreement regarding PUC CPG #NMP-6369 and the Motion to Voluntary Withdraw Dismissal and Withdrawal as a Party.”

Regarding Carlson’s confirmation of another solar project, Barrett added, “I have no idea as to a timeline for any future projects.”

In the meantime, Tolles told TNR that New Haven has too many non-utility distributed electrical generation facilities, all of which have been constructed within the last few years.

“Yet, Green Mountain Power has indicated that many distribution circuits serving New Haven are ‘poor’, this means that circuits are at or exceeding capacity,” he said.

As of March of last year, the New Haven Town Plan cites Green Mountain Power as indicating that only a small portion of New Haven’s east side has available capacity left on its distribution lines.