New Hampshire’s Secretary of State Bill Gardner told a congressional committee on Tuesday that a proposed overhaul of voting laws would result in a federal takeover of state elections.

Gardner, testifying before the Senate Judiciary Committee, called the Democrat-backed voting bill H.R. 1, entitled the For the People Act, an “unjustified federal intrusion” into the way individual states conduct their elections. 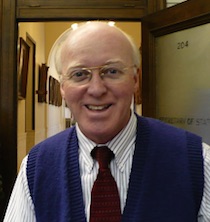 “I am deeply troubled and concerned about the direction some in Congress would take the states in terms of the conduct of elections,” the Democrat said during the livestreamed committee hearing. “This will damage voter confidence, diminish the importance of Election Day itself, and ultimately result in lower voter turnout.”

The measure was approved in March by the U.S. House of Representatives on a 220-210 vote that went along party lines, with Republicans opposed. The bill is now pending before the Senate, and Tuesday’s committee hearing was a first step in that process.

Gardner, who has held his position since 1976, was one of several panelists who testified at Tuesday’s committee hearing – which was titled “Jim Crow: The Latest Assault on the Right to Vote” – including Stacey Abrams, a Georgia Democrat and progressive voting rights activist, and Sherrilyn Ifill, president of the NAACP Legal Defense and Educational Fund, Inc.

Earlier in the day, the New Hampshire Democratic Party hosted a livestreamed event where they called for passage of the election law bill and criticized Gardner and New Hampshire Republicans for their opposition.

“Anyone who has read the For the People Act understands that it’s about addressing the duel crises in our election systems – corruption and voter suppression,” Raymond Buckley, the party’s chairman, said during the briefing. “It will rein in the influence of corporations and billionaires U.S. elections, while cracking down on unethical behavior by lawmakers.”

His fiery statement took aim squarely at House Speaker Nancy Pelosi, a California Democrat, whom he accused of “attacking our state by using federal authority through H.R. 1 by rendering articles of our own state constitution null and void.”

“If we let Washington take away these and other articles in our constitution, they can do other damage to our state, and could put our presidential primary in a perilous position,” Gardner wrote. “New Hampshire has a solid track record for running sound and trouble free elections that do not warrant this type of federal meddling.”